The year 2008 was a banner year for GLOCKs used in movies and T.V, as several major Hollywood productions elevated the GLOCK to featured-player status.

In the legal thriller “Fracture,” “Silence of the Lambs” star Anthony Hopkins takes another Hannibal Lector-type turn as a mad genius, obsessed with perfection, who shoots his wife. The key to his defense is that the GLOCK 21 pistol recovered at the crime scene has never fired a shot. The hapless prosecutor, played by Ryan Gosling, and an army of forensics men play out scenes with the several GLOCK pistols that figure in the case.

When Liz Sherman, Hellboy’s Pyrokinetic girlfriend takes on supernatural baddies in the summer blockbuster “Hellboy II: The Golden Army,” she packs more than her fire conjuring powers—she packs her GLOCK. When calcium-craving Tooth Fairies swarm out of Manhattan auction-house walls, Liz, played by Selma Blair and her agents from the Bureau of Paranormal Research and Defense open fire with their issue GLOCK semi-automatic pistols.

The FBI squad from Hellboy’s BPRD aren’t the only monster fighting movie heroes turning to GLOCK. The zombie-battling survivors of “Resident Evil: Extinction” make their way through the post Apocalyptic wastelands of Las Vegas, NV under the firm protection of Ga 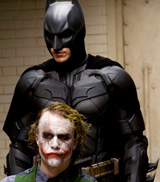 ston Glock’s polymer framed super-gun. When the Umbrella Corporation unleashes the mutant dogs and living corpses made popular in the two previous movies based on the Capcom Video game, they are met with jacketed lead from the GLOCK.

“The Dark Knight’s” Joker, portrayed by the late Oscar Winner Heath Ledger, starts his Gotham-City crime spree with a GLOCK in his hand.

From the sublime to the ridiculous, the Jason Staham-starring “Transporter 2” features Lola, an underwear-wearing assassin played by Kate Nauta, who hits the streets of Miami with a pair of laser-sighted, silenced GLOCK 18s (and not much else). On the other side of the world giant-sized movie star Leonardo DiCaprio takes to the bush with a pint sized GLOCK 26 in the African action thriller “Blood Diamond.”

This year the GLOCK is again the weapon of choice for small-screen crime fighters as FBI Agent David Sinclair played by Allimi Ballard totes a GLOCK 23 in the CBS show “Numbers.” The combined lab men and women from “CSI: Miami” and “CSI: New York” take on their unsolvable crimes with every model GLOCK from the compact .40 GLOCK 27s to full-size GLOCK 17 9x19mms at their side.

While all the CSIs, including “CSI: New York” are actually filmed in Los Angeles, the detectives of the New York-based shows “Law & Order,” “Law & Order SVU” and “Law and Order Criminal Intent” film their gritty dramas on location in the Big Apple. Because of New York’s arcane firearms laws requiring “non-guns,” these TV good guys must carry GLOCK 19s that have been modified to never again fire live ammo. What a waste of good GLOCKs!

With more and more GLOCKs like the new 21SF being adopted by law-enforcement and military units every day, you can be sure you’ll see more GLOCKS on the big and small screen next year!