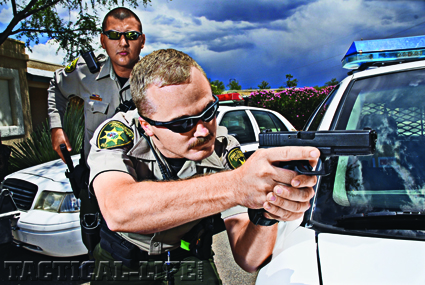 From 1865 until 1992, Pima County, AZ, deputy sheriffs used an assortment of revolvers and pistols including .357 magnum wheel guns and .45 Auto M1911s to protect life and property. After decades of carrying these various handguns, the sheriff made a decision to modernize the equipment of his department and adopt a new service pistol. This article examines the transition the Pima County Sheriffs Department made to GLOCK pistols.

The Pima County Sheriff’s Department (PCSD) operates from a headquarters facility and six patrol districts with various specialized units, providing law enforcement services in an area that covers 9,186 square miles of territory in southern Arizona. As far as the population numbers are concerned, more than one million people live in the greater Tucson area. Just like other law enforcement agencies, the PCSD has always taken the need to properly arm its commissioned, sworn personnel very seriously.

Applying Force
When it comes to firearms training, the PCSD is fortunate to be partners with the High Intensity Drug Trafficking Area Task Force (HIDTA), a federal entity under the office of the “Drug Czar” that built a large, modern firearms training facility at the Rita Road exit off Interstate 10 in Pima County.

As the permanent custodians of the Pima Regional Training Center, the PCSD manages the facility that includes numerous classrooms, several pistol ranges, a rifle range, a live-fire training building and a “survival town” that is built to look like a typical suburban neighborhood, complete with buildings and paved streets, that is ideal for tactical training and simulated munitions training. The Pima Regional Training Center is used by every law enforcement agency in the area and is managed on a daily basis by its own rangemaster, Sgt. Jim Murphy of the PCSD.

While covering this story, I was invited to visit Sgt. Murphy at the Pima Regional Training Center, a place I know well because I trained at this incredibly well-run range facility before I retired from my federal law enforcement career. During my visit, Sgt. Murphy, who also serves as a SWAT sergeant, briefed me about the day when Pima County’s sheriff decided that it was time to modernize his department and issue his commissioned, sworn personnel with the best pistol on the market that fit their needs. This pistol turned out to be a GLOCK.

As the story goes, when it came time to select a new service handgun, the PCSD evaluated several designs. It used some of the research conducted by the U.S. military when they decided to transition from numerous .38 Special revolvers and the .45 Auto M1911 to a high-capacity 9×19 pistol. After an exhaustive study was conducted, the facts were presented to the sheriff and the decision was officially made in 1992 to select the 9×19 GLOCK 17 as the new service sidearm for the Pima County Sheriffs Department.

At the time, the GLOCK 17 was a 21st-century design that was being manufactured in the tail end of the 20th century. In addition to being armed with a pistol that had a magazine capacity of 17 rounds, deputies would also be armed with a pistol that was flawlessly reliable in a sandy desert environment or at higher elevations where large amounts of snow accumulated in the winter months.

Even though the PCSD now had a new service pistol, the sheriff continued to authorize his commissioned personnel to carry a variety of personally owned handguns that were approved for on- and off-duty use. When I did the research for this article, I found it interesting that as time passed more and more deputies adopted an issued or privately owned GLOCK pistol rather than ones made by another manufacturer because at this time the department wanted to replace their 12-year old GLOCK 17s with a new GLOCK service pistol. More on this later.

Like many other tactical officers, the PCSD deputy sheriffs who were members of the SWAT team initially preferred to use a M1911 in .45 Auto. By 2002 to 2003, a decision was made to transition to a GLOCK 31 in .357 for all PCSD SWAT personnel. The decision was made to adopt the GLOCK 31 because this pistol provided tremendous firepower in a super hard-hitting “modern” caliber. 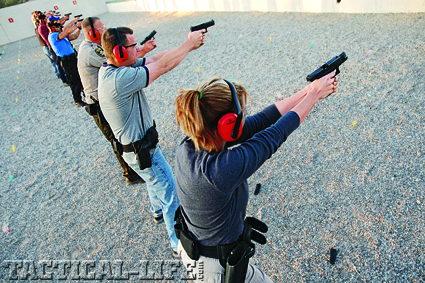 Moving Forward
In 2004, seven different law enforcement agencies in Pima County (with the exception of the Tucson Police Department) joined forces to form the Pima Regional Special Weapons & Tactics Team, also known as SWAT. This development had an interesting impact on the issue of service pistols for the PCSD because at this time the department wanted to replace their 12-year-old GLOCK 17s with a new GLOCK service pistol, the GLOCK 31 in .357.

Unfortunately, once the regional SWAT team was formed, the PCSD could not expect six other agencies to purchase G31s so everyone would have ammunition and magazine compatibility. Instead, the decision was made to kill two birds with one stone and have the PCSD purchase brand new GLOCK 22 pistols in .40 so the regular commissioned deputy sheriffs would get a brand new service pistol in a harder-hitting caliber and the deputies in the SWAT team would have a pistol that was compatible with the other member agencies of the regional SWAT team.

This was the case because at that time the GLOCK 22 was well on its way to becoming the most popular mainstream police service pistol in the United States. The GLOCK 23 and GLOCK 27 were also purchased in smaller numbers to accommodate commissioned personnel with smaller hands and those who needed to carry a more compact pistol.

Many of you know that the average 9×19 GLOCK 17 does not wear out in 12 years. However, in 2003 and 2004, the PCSD was a very progressive law enforcement agency. While they could have easily continued using their 9×19 GLOCK 17s, the Pima County Sheriffs Department wanted to take advantage of the obvious benefits associated with using hollow-point .40 ammunition. The PCSD also wanted to start using tactical lights on their service pistols and, as you know, GLOCK 17s that were manufactured in 1992 did not have an accessory rail attached to their polymer frames.

Once this transition was made, all parties involved were happy campers. The regular patrol deputies and other commissioned sworn personnel had brand new GLOCK pistols in a harder-hitting chambering that also accommodated a tactical light. In addition, the Pima County SWAT deputies were armed with a .40 GLOCK service pistol that was compatible with the other members of the regional SWAT team.

When I inquired about the percentage of commissioned personnel in the PCSD who use GLOCK pistols, even though a long list of approved personally owned pistols can still be carried, I was told that approximately 95 percent of the sworn personnel in the PCSD carry a GLOCK. This includes personally owned GLOCK pistols that serve as service pistols, off-duty guns, back-up guns and undercover guns.

To be even more precise, the PCSD has 540 commissioned officers/deputies and there are 581 GLOCK pistols issued to 540 members of this law enforcement agency. This is the case because, in addition to issuing the GLOCK 22, the PCSD also issues some G23s and G27s to personnel who need to be issued a different-size GLOCK pistol.

As far as firearms training is concerned, the PCSD provides their commissioned personnel with all the ammunition they require to maintain their proficiency with their on- and off-duty firearms. In addition to qualifying on the 50-round Arizona Police Officer Standards Training  (POST) daytime course of fire, the PCSD requires its deputies to qualify on the 25-round night qualification course as well.  The department also incorporates different types of drills in their firearms training. During the night qualification shoot in late April of 2009, I observed deputies practicing to use one hand to operate their service pistol. 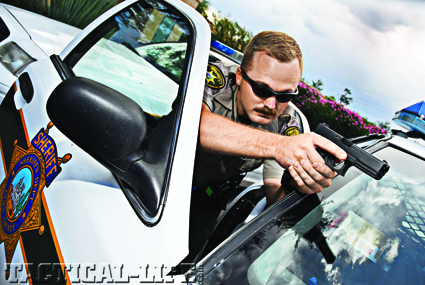 Where It Counts
The deputy sheriffs in Pima County, AZ, seem very happy carrying their issued and personally owned GLOCK pistols. In addition to being lightweight, easy to carry concealed, accurate and reliable, the GLOCK pistols that are being used on/off-duty in Pima County have given a good account of themselves in combat situations. In the last few years from 2004 to 2008, PCSD deputies have used authorized deadly force with GLOCK pistols in the line of duty in 15 separate incidents.

It is easy to see that PCSD deputy sheriffs are extremely well-trained shooters when you consider that in 12 of these authorized uses of deadly force situations the perpetrators/subjects involved were either killed or wounded. This is an excellent record for insuring accurate shot placement while operating under an enormous amount of stress.

In one incident, a deputy sheriff engaged one subject from a group of four who had committed a home invasion while armed with Kalashnikov-style rifles. He was able to use his GLOCK service pistol to mortally wound one of the violators.

In another incident, one deputy sheriff was wounded in the hand and another was shot once in the chest by a male subject armed with a .50-caliber Desert Eagle pistol. The PCSD deputy sheriff who was shot in the chest returned fire with his GLOCK pistol and fatally struck his assailant six times.

In 12 different shooting incidents during the above mentioned period of time, Pima County deputy sheriffs proved that they are among the most well-trained law enforcement officers in the country when they were able to reliably deliver accurate shot placement while using GLOCK pistols with all original GLOCK parts. However, in one use of deadly force situation a personally owned GLOCK that was reportedly equipped with aftermarket parts failed to fire when a PCSD deputy sheriff needed to defend himself with his pistol. This was confirmed by a joint investigation that was conducted by GLOCK and the PCSD.

Keeping It Real
It is safe to say that the PCSD made a sound choice when it selected GLOCKs for its new sidearms. When it comes down to wanting to modernize the firearms of a law enforcement group, you cannot do much better than the cutting-edge GLOCK pistol.

From 1865 until 1992, Pima County, AZ, deputy sheriffs used an assortment of revolvers…