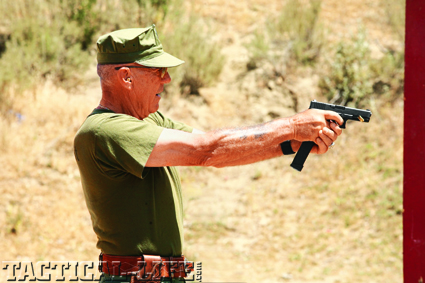 U.S. Marine Corps Gunnery Sergeant, retired, R. Lee Ermey should be no stranger to the readers of these pages. One of Hollywood’s best-known character actors, “the Gunny,” as he is known to fans worldwide, applied his actual experience in the Marines toward creating memorable performances in more than 100 film and television projects.

From his original, screen-searing turn as the drill instructor in Stanley Kubrick’s Full Metal Jacket, (“What is your major malfunction?!”) to Sheriff Hoyt in the new Texas Chainsaw Massacre films to providing the voice to a plastic green army man in the animated Toy Story movies to public appearances for our wounded warriors, the Golden Globe-nominated Ermey gives his all to each mission.

New Mission
Now, after taking us into the world of the U.S. military for eight seasons of the TV series Mail Call on the History Channel, the Gunny returns to the small screen with his new History Channel show Lock N’ Load With R. Lee Ermey. Each episode will trace the evolution of the weapons that made battlefield history, from the earliest examples up to current state-of-the-art weaponry to what the future holds for our troopers. Unlike other shows, it will be the Gunny himself that gets “hands on” with the heavy metal.

In “The History of Tanks” episode, for example, Gunny got a chance to get behind the wheel of the first armored tank, built nearly 100 years ago, and cranked it up to its top speed of 4½ miles per hour (m.p.h.). “Sometimes I would have sworn I was hitting closer to 5 miles an hour,” the Gunny joked, before he ended up behind the wheel of our current main battle tank, the Abrams M1A1.

A Pleasant Visit
I caught up with the Gunny and his Lock N’ Load crew out at Wes Thompson’s Lake Piru, CA shooting ranges, where the Steel Challenge is held each year. Ermey was filming an episode of Lock N’ Load on the history of combat handguns, highlighting GLOCK pistols, including the fully automatic GLOCK 18 C in 9×19.

When I arrived, he was getting a little help from Team GLOCK’s rising young superstar, Jessie Abbate, 2009 Steel Challenge and USSA Pro-Am Championship Ladies Limited and Open Champion, a girl with a smile to match her winning ways. In seven short years, the perky Jessie has gone from a beginning shooter to top-ranked professional, earning eight Ladies National and eight Ladies World Champion shooting titles, as well as other regional champion titles, in four different shooting disciplines. In the summer of 2006, she joined Team GLOCK and became a representative to the shooting industry. Jessie trains with her husband Billy, a former professional shooter and one of the first competitors in the nation to earn the Grand Master classification.

Despite her competition schedule, Jessie is a part-time college student and an avid hunter who has harvested trophy whitetails with both bow and rifle, and also has taken several different species of African big game. In fact, for her honeymoon, she enjoyed a “huntingmoon” in the bush of Tanzania going after Cape Buffalo, one of Africa’s “Big Five” most dangerous game! But, like the Gunny and millions more, the sun rises and sets on Jessie’s GLOCK pistols. 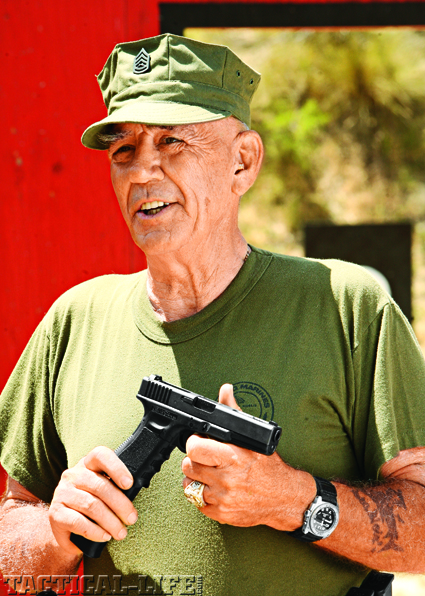 Burning Ammo
After running a combat course to show the Gunny how she handles competitions with her near stock competition GLOCK, Jessie and our favorite drill instructor loaded up a truckload of GLOCK 33 round magazines and got to work with the select-fire GLOCK 18 C 9×19.

The temperature that day was in the low 100s, but the sweltering heat was quickly forgotten as fountains of brass spewed from the amazingly controllable compensated GLOCK 18 C, putting a smile on Gunny, Jessie and the crews’ faces. The GLOCKs on hand ran flawlessly through the repeated “takes” required for filming. The GLOCK 18 C in particular is an incredible weapon, and, in the hands of police or military units, would serve the role of squad submachine gun with ease.

After watching Jessie and the Gunny drain several GLOCK 33 round magazines through the select-fire GLOCK 18 C, I got a chance to talk to filmdom’s most famous drill instructor about his latest television endeavor.

What Brought Him Here
Ermey retired from Marine active duty in 1972, but he never stopped going to work creating awareness of the U.S. military and its role in preserving our freedom and way of life. “I believe in payback,” Gunny laughed. “If I hadn’t joined the Marines I’d probably be doing a life sentence in Walla Walla state prison because I wasn’t headed in the right direction, and so everything I’m doing now to shed light on our military is payback for saving my life.” Is that why he gravitates towards military projects like Lock N’ Load?

“It gives me a chance to show Americans how their defense dollars are being spent—that it’s not being squandered—and show them who the real troops are—and we should respect and love them. And I’ll be honest. I used to worry when I saw the kids hanging outside the malls with their skateboards. How were we going to fight a war if we had to? But then there’s a whole generation of kids who stepped up to the plate when we went into Iraq, and my fears were unjustified—so we need to support those young troops. They put their asses on the line so we can sleep soundly every night.”

And Gunny definitely sleeps soundly after a day working on his new show! Traveling the length and breadth of the country, Lock N’ Load is a lot of work even for a battle-weathered grunt who still competes in Service Rifle matches with his beloved M1 Garand and M1A. He must love what he’s doing. “Look, I’m 65. I can retire, thank the Lord. I don’t need the money. But I knew we needed a bigger, better show. Lock N’ Load is Mail Call on steroids. It’s twice as long—one hour long –and I do it all: I drive the tanks, I shoot the guns. When I drive home from the day’s shooting, my adrenaline is pumping so much, heck, I can’t get to sleep until one o’clock in the morning!” 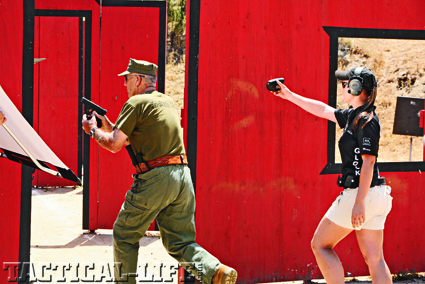 An Expert’s Choice
Today’s shooting brings in another of Gunny’s loves: The GLOCK “Safe Action” pistol. “I love the GLOCK. I have to tell you, a lot of people over the years had asked me to endorse their product—but I refused. The “Gunny Approved” trademark is not something I give lightly, because I can’t be the spokesman for a product I don’t use myself! But when GLOCK came to me to become their spokesman, I was so damn relieved because here was a gun I already owned and used.”

Like the Gunny himself, GLOCK pistols continue to march. “I don’t care if you bury a GLOCK for six months,” the Gunny beamed. “Dig it up and it will shoot. You know, I’ve been to the GLOCK facility in Georgia and I went into the repair shop, and the repair guy at GLOCK is like the old Maytag repairman—he’s sitting back there covered with cobwebs. Unless you put the wrong ammo in them, the GLOCK will keep on running.”

And how much longer will he be at it? “I’ll be going at it until I’m too crippled to hold my weapon. But that’s a long way off. I’m in the best shape of my life. I’m too old to charge up the hill at high port and shoot the bad guys—but I can get up the hill—I just have to rest before I start shooting.”