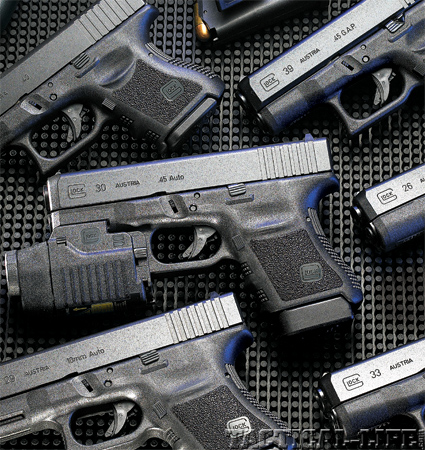 One of the most trusted weapons platforms available, Glock has a substantial line of subcompact offerings of every caliber for every shooter. Steve Woods photo

In the world of concealed carry, there are two kinds of people: those who carry a gun because their work demands it, and those who carry a gun because their environment demands it. The differences, though subtle, are in the choices made in carry guns. The focus here is on the latter, because concealed carry when it is not part of your profession is both an emotional and a physical commitment. The emotional part is very personal and everyone with a CCW must come their own terms with the use of deadly force; the physical side is more a matter of practical choices. Carrying a semi-automatic pistol and keeping it out of sight—which is 99.9 percent of the time—takes some planning. This is the Glock plan.

When Glock entered the civilian firearms market in the mid-1980s, the Austrian armsmaker only offered one model—the original Glock 17, a medium-frame semi-auto chambered in 9mm with a capacity of 17+1. It was a holster gun best suited for military and law enforcement use and open carry. It took Glock until 1994 to introduce its first subcompact model, the G26 chambered in 9mm, which was later followed by the G27 model chambered in .40 Auto, a round that was quickly replacing the 9mm as the first choice of law enforcement officers. It was the Glock 27 that really defined the high-power subcompact. 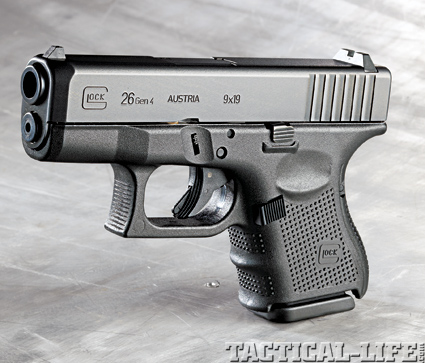 Easy Crossover
In terms of Glock models, subcompact has a somewhat different characterization than a more conventional small semi-automatic like a Walther PPK or even the new Ruger LCP and LC9 which, despite sharing polymer frames like all Glock pistols, have more traditional slide and grip configurations.

When it comes to subcompacts, Glock is its own category because each caliber model bears the same design characteristics as its larger counterpart, what one might call the counter melody or counterpoint. Glock intentionally created subcompacts in matching calibers so that individuals who carry a full-size pistol in a specific chambering like 9mm, .40 Auto, 10mm, .357, .45 ACP or Glock’s proprietary .45 G.A.P. caliber can have an identical subcompact.

Since their introduction in 1982, all Glock models have used a composite polymer frame combined with a durable surfaced-hardened steel slide. Regardless of the size or caliber, all Glock pistols share common design features and it is this familiarity that makes the pairing of full-size and subcompact models work so well. One might not carry both guns but consider the use of a 9mm Glock 17 as a home protection arm and the subcompact 9mm Glock 26 as a concealed carry gun. Knowing the fundamentals of one gun is knowing both. 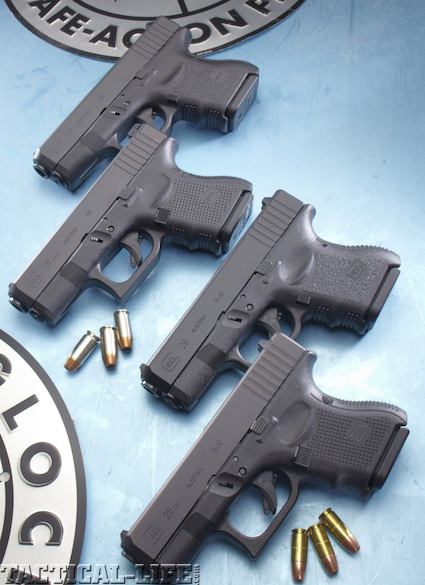 There are two visual tells about a Glock’s condition, though one of them can be misleading. If the trigger has been pulled and no round discharged, it remains it its rearmost position (locked back with the safety toggle almost flush to the trigger). When the action is cycled, the trigger moves forward and the safety toggle extends. It is also easy to see (and feel) if a round is chambered because the extractor will project slightly away from the slide when a cartridge is loaded. This is a very important visual check because if the gun has been cleared without pulling the trigger afterward, and a loaded magazine reinserted, the trigger will be in the firing position even though a round hasn’t been chambered. A Glock will also fire a chambered round with the magazine removed, which many consider a tactical advantage.

The average trigger pull on a Glock is 5.5 to 5.85 pounds with 0.5 inches of take-up. After staging the trigger (pulling back to full tension), the effort required to discharge the gun is minimal, and releasing the trigger instantly returns the Glock to a safe condition. This is far more advantageous than having a gun that has to be decocked, or manually returned to safety before being reholstered.

A subcompact Glock presents a very small profile, about the area of an average-sized man’s hand, and weighs an average of less than 20 ounces empty. With a full magazine and one in the chamber, subcompact models still average under 2 pounds. The width of Glock subcompacts averages 1.18 to 1.28 inches, with the exception of the G36 Slimline .45 ACP, which measures a svelte 1.10 inches.

Excluding the G29 and G30 (measuring 1.28 inches in width), the majority of subcompact models will conceal in a pocket holster carried in the front pocket of casual or dress slacks. Most, with the possible exception of the G36 Slimline, are a bit more difficult to carry in a jeans pocket. There are, however, a great variety of IWB, paddle and belt holsters that make carrying a Glock subcompact no more cumbersome than a smartphone.

The LEO’s Pick
Today, 65 percent of law enforcement officers across the U.S. carry Glocks, an extraordinary accomplishment considering that just 30 years ago no one had even heard of Glock. While the 9mm G17 is still widely used, LEOs from city police, to county sheriffs, state and federal officers, have mostly switched to the .40 Auto for its superior penetration and stopping power. An “intermediate”-sized round, the .40 Auto is relatively new for a cartridge (only 22 years old), but the .40-caliber bullet is considerably older, dating back to 1874 when Winchester introduced the .38-40 W.C.F. cartridge. Originally intended as a rifle round, the .38-40 (a .40-caliber bullet backed by 38 grains of powder) found greater popularity in Colt and S&W revolvers during the 1870s and 1880s. Because it offered less recoil than a .44-40 or .45 Long Colt, and more punch than a .38, it was a cartridge preferred by many frontier lawmen. This rationale translates directly to the .40 Auto. 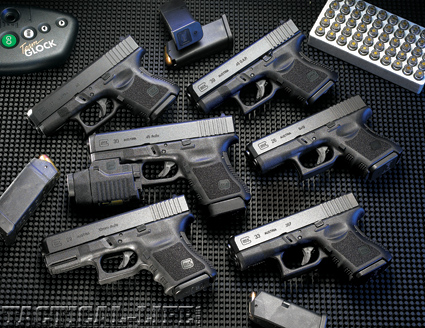 The .40 Auto cartridge introduced in 1990 brought about a sweeping change in law enforcement sidearms. Up to this point, semi-auto options had been the traditional 9mm, the more potent but heavy-recoiling 10mm (initially for the FBI), or traditional .45 ACP. Glock was the first armsmaker to respond to law enforcement needs, introducing the .40 Auto Glock 22 in 1990. Since then, Glock has developed a full line of .40 Auto models: the G22, G23 compact, G24, G27 subcompact, and G35. With the Glock 27 now available in 2012 as a Gen4, it rises to the top of just about every concealed carry list.

Gen4 Models
The Gen4 series adds one additional layer of convenience to the subcompact category—interchangeable backstrap pa-nels. On the Gen4, the standard grip is slightly smaller than previous models, and there are two easily attachable backstrap panels that step up grip size (i.e. distance from trigger) incrementally. The panels cover the entire backstrap surface from the top of the grip frame to the bottom of the magazine well, thus increasing the entire area of the grip—not just a portion of the backstrap like most interchangeable grip panels. The change in distance from the trigger is from standard (no panel) measuring 2.76 inches, to the medium panel, which increases distance to 2.84 inches, and large, for a maximum of 2.92 inches, an overall extension of 2mm and 4mm, respectively. The panels are added by attaching the base of the grip cover to the magazine well and locking it into place with the crosspin at the top of the grip frame. A longer crosspin is included, as well as a small tool to remove and insert the pins. Gen4 subcompacts include the 9mm G26 and .40 G27.

There are seven Glock subcompact models covering calibers from 9mm to .45 ACP. Whether as a backup gun or a primary concealed carry sidearm, the latest Glock technology can be as close as your trouser pocket. 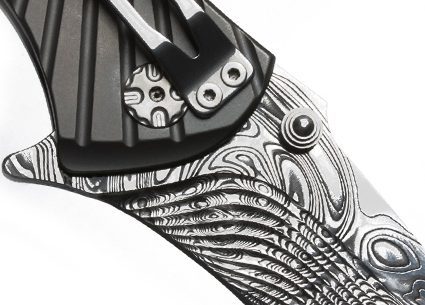 One of the most trusted weapons platforms available, Glock has a substantial line of…