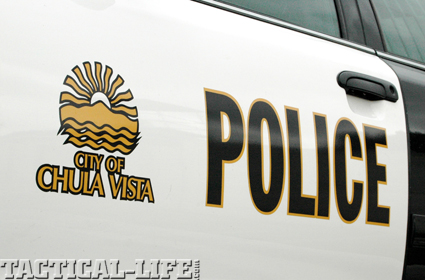 San Diego County, California, is unique. In less than an hour, you can travel from desert to mountains to the Pacific Ocean. It is a beautiful area, but beauty does not stop the crime that has only accelerated because of the economy’s downturn. Luxury homes that once sold for a cool million sit vacant and abandoned, many now almost half their value. The rise in foreclosures and drop in property values has hit everyone here, and the result is the same everywhere you go: government coffers run low and budget cuts follow. At the same time, the demand for government services is rising due to the same economic factors.

San Diego County also sits on the southwest border between the United States and Mexico, with the city of Tijuana just across the fence, comprising one of the epicenters in the war on drugs and a spawning ground for cross-border crime.

Just a few miles north of that border resides the city of Chula Vista. Here, there is an older, well-established portion of the community that goes from San Diego Bay on the west and stretches eastward, until it hits the new areas of the early 2000s boom developments. This area has been hit harder than most. People came here to buy a home during the housing boom—but now that those times are gone, the city’s budget has also gone with them. 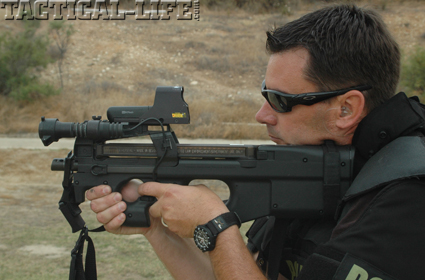 Budget considerations aside, the citizens of the area hold their Chula Vista Police in high regard, and the CVPD continues to enjoy a high rate of citizen approval.
But now the agency is now seeing an increase in criminal activity from cross-border violence, with increased kidnappings and other crimes. Many of the suspects come from Mexico. Officers are receiving specialized training in how to look for these cross-border connections to better deal with this emerging issue. The officers are also seeing other issues, such as gang violence and drug crimes.

The Chula Vista Police Department expanded rapidly to deal with the explosion in growth from the 1990s and mid 2000s. It now comprises slightly more than 230 sworn personnel, and is an agency that would be the envy of any city with a mid-size department. The Chief is just retiring after being in command for more than 17 years, and is still highly regarded by everyone I spoke to.

The CVPD protects the second largest incorporated population in San Diego County, an area of about 50 square miles. (It ranks third in agency size, only behind the San Diego PD and the San Diego SO.) As any such police agency, they have patrol, investigative and various task-force positions to meet the needs of the citizens they serve. 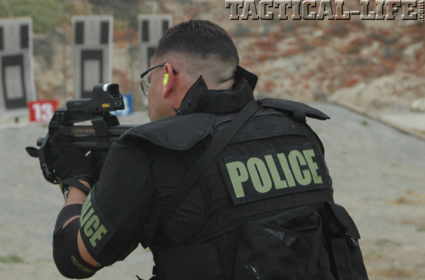 One thing I noticed about the CVPD right away is their ability to think outside the box when there it benefits them to deviate from conventional policing strategies. While budget woes have caused many agencies to pull personnel from specialized units, the CVPD has taken a different approach. Captain Leonard Miranda says that they see personnel in these positions as a vital part of keeping up with the continuing violence in Mexico. Intelligence and information in an area of cross-border violence can mean the difference between closing cases and seeing them go cold. Such task forces allow Chula Vista’s police to better know whom the players are and what they are up to, thus enhancing public safety in the region.

As for counter terrorism, there is the usual high level of preparedness that is the “new normal” for us in law enforcement. All officers are trained in Level-C Hazmat gear as well as LERT (Law Enforcement and Regulatory Training). SWAT is also in preparation to be set up in Level-B Hazmat equipment.

One of the most impressive and visible signs of the CVPD is their new home. They recently had a new, state-of-the-art headquarters built. This building is a very functional police services building that looks first rate as well. As you enter, there is a lobby that, while secure, allows for easy access by the public with nearby records and meeting rooms. Below is a modern lead-free range, and inside, the department staffs its own prisoner-holding facilities. In my opinion, this building is the one that sets the mark for police headquarters in our San Diego County.

Guns of the CVPD

The CVPD has also set its own course in selecting a duty weapon. In an era where the .40 S&W has become king of the heap, Chula Vista has decided to stay with the 9mm. I asked their Lt. Arsenault, head of their SWAT team, if they felt under-gunned. The answer was an emphatic “No.” The 9mm has done everything they have asked of it and there are no plans to change.

Carrying the Sig P226 in 9mm, they are well protected by a weapon with a stellar reputation. Officers can opt for the smaller P239 in 9mm when a smaller weapon is needed. One other innovation is the use of laser sights. Chula Vista PD officers can carry laser grips, such as those made by Crimson Trace, on their weapons. Such sights can increase accuracy in point shooting, as well as be an added deterrent: place a red dot on a suspect’s 10-ring and he may think twice about what he is doing.

For long guns, officers have a 12 gauge with 00 buckshot in the car, and are issued slug rounds to use as needed. Ruger 9mm carbines are available as well. The Department is currently looking to purchase an AR platform, such as those offered by S&W, Colt or Ruger, but as with all things in a tough economy, the funding must come first. 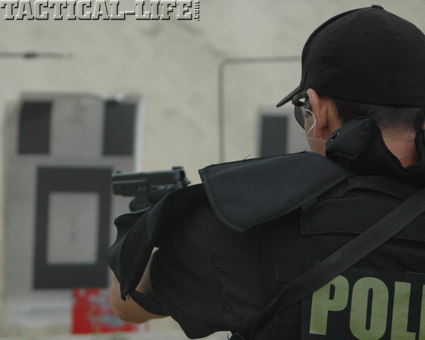 CVPD issues the Sig Sauer P226 9mm as its duty sidearm. When asked if they felt outgunned with a 9mm in an age of .40 S&W, the answer was an emphatic “No.”

Each officer is equipped with a Taser, and SWAT personnel have pepperball or beanbag shotguns at their disposal.

As a medium-sized agency, they maintain a healthy SWAT team. With 17 members who do SWAT part-time while working other units, proportionately, it is a good-sized unit. Their SWAT team also has chosen to take an innovative tack on arms. While they have some older Bushmaster ARs, they have chosen to go mainly with the FN P90 as their weapon of choice. This short, 5.7mm caliber is a bullpup design with an innovative magazine that takes the rounds, which are stored perpendicular to the barrel axis, and rotates them as it feeds them.

Recoil is mild, and these short, lightweight weapons are ideal for close-in and entry work. Full-auto fire is far more controllable than anything I have tried. All weapons are equipped with a high-intensity light and EOtech sights.

While these weapons are great for entries, they will also work for perimeters, a task usually delegated to the .223 rifles. Chula Vista had usually left this type of assignment to the AR platform, but according to Sgt. Redmond of CVPD SWAT, they are able to shoot accurately out to 100 yards, and perimeter units are deploying the P90 without complaints. 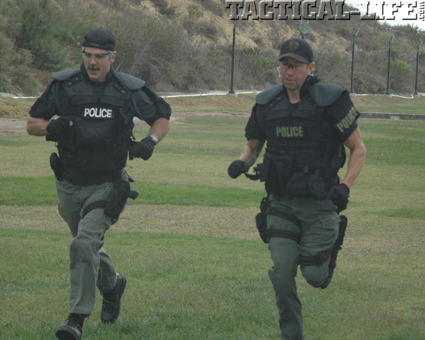 CVPD officers train well together, and SWAT members train between 30 to 40 hours (40 hours for snipers) per month.

The CVPD SWAT team’s four snipers use the Remington 700 in .308, and for optics they are switching to the Leupold Mk-4 long-range tactical scopes. Training on ranges from 50 to 200 yards, they are called on to be the eyes at any tactical deployment.

At a recent Aardvark Tactical competition, CVPD SWAT did very well with the P90s, finishing in the top half of the group for their first time with these weapons.
I was fortunate enough to see the CVPD SWAT team in action during a recent day at the range. During their qualification, they fired full-auto at ranges out to 10 yards and had to keep all rounds in an approximate 8-inch box on the target. Their weapon control and team coordination were impressive. Later, they transitioned to drills and other training, and it was evident the group works well together.

Training is an important priority for Chula Vista Police as well. Officers get 10 hours of training a month. SWAT officers get 32 total hours, with SWAT snipers getting 40 total hours a month. In the coming budget months, ideas are being floated to try to better incorporate that time and save money.

Not only does the department’s SWAT work well together, but they also work well with local agencies. In 2000, an active shooter went on a rampage in a local retirement home in what happened to be, at that time, the city’s only high-rise. CVPD’s SWAT entered on the ground while the local sheriff’s agency went to the roof by air in a coordinated effort to stop the shooter. 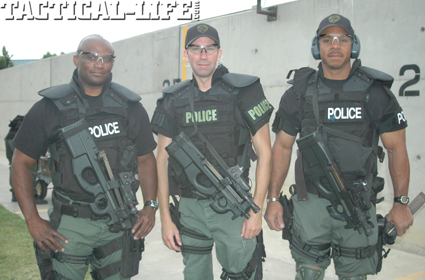 With a city perched on the border with a nation in chaos over warring drug cartels, in a time when resources are tight, it is gratifying to see the Chula Vista Police holding their ground and looking proactively to the future. Lack of money may be an obstacle, but it’s obvious they plan to keep their priorities straight for their citizens. Good funding is a helpful resource, but good personnel are the crucial resource needed to make an agency work. 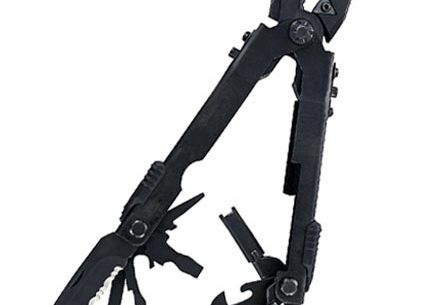