Regular readers of this annual are probably aware that in the 21 years the Complete Rifleman has been published, not one word has ever appeared on scout rifles. And I think it’s safe to say that that hasn’t gone unnoticed. The reason for the scout rifle’s conspicuous absence through the years is because I’ve always doubted its efficacy as a general purpose hunting rifle. Rather, I’ve always seen it more as 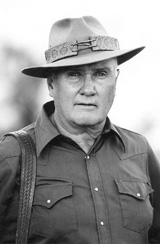 a survival/home-defense weapon, and indeed much of the rationale I’ve read has seemed to reinforce that impression.

The scout rifle concept was the brainchild of the late Jeff Cooper, who for many years was a staff contributor to Guns & Ammo Magazine. Cooper was best known for his affinity for the 1911 .45 Colt and his many contributions to combat pistol shooting, but he was also an experienced hunter. In was in the early 1980s that Cooper formulated the specs that would define the scout rifle. Ironically, the one feature most closely associated with the genre is the barrel-mounted intermediate eye relief (IER) scope of low magnification, yet Cooper said a scope was not mandatory on a scout rifle. What is mandatory are iron sights consisting of a ghost-ring aperture and, preferably, a square-post front sight. If a scope is mounted, it should be with quick-detachable lever rings.

The rationale for the forward-mounted, low-power, fixed-magnification scope (2X to 3X) was to maintain peripheral vision and provide fast target acquisition, as well as to facilitate quick reloading from the top or with a stripper clip (the latter would preclude commercial actions). Detachable magazines were also approved, but I don’t think Cooper was a fan of fixed boxes with hinged floorplates, at least not on a scout rifle.

Specs of a Scout
Other defining specs are that a scout rifle be a short-action (.308 Winchester family) bolt rifle weighing no more than 3 kg (6.6 pounds) field ready but unloaded, and no more than 1 meter (39.4”) in overall length. In light of the latter requirement, we’re really talking a carbine rather than a rifle, because even with the shortest of short actions, a barrel would have to be in the 19- to 20-inch range to make the cut as to overall length.

Caliber-wise, Cooper specified the .308 Winchester as being the best choice, with the 7mm-08 Remington as the next best. Today he probably would approve of cartridges like the .338 Federal and any of the 7mm or .30-caliber short magnums. Accuracy requirements were 2 MOA using either the aperture or the scope.

Last, a scout rifle must be equipped with either a Ching Sling or a CW sling for both carrying and to help steady the rifle. Retractable bipods are also approved, as is an accessory rail for mounting a flashlight, for example.

That, in a nutshell, defines the scout rifle as Cooper envisioned it. Steyr of Austria was the first to offer a production version of the scout in the late ’90s, but it was chambered for the .376 Steyr, a cartridge developed for Steyr by Hornady that came close to matching the power of the .375 H&H Magnum. Bottom line: In the light Steyr rifle it proved to be brutal on the person behind the gun. Steyr still offers its Scout, but it now can be had in the Cooper-recommended .308 Winchester as well as .223 Remington, .243 Winchester and 7mm-08 Remington. Ruger and Savage also offer their versions of the scout rifle. All comply fairly closely to Cooper’s specs, but with this being my first venture into the scout rifle arena, I looked around for a custom shop that more or less specializes in building rifles of this type. The name that came up most frequently was Lew Bonitz’s Grizzly Custom Guns of Columbia Falls, Montana. 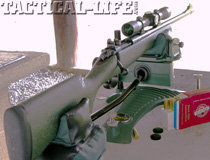 The Grizzly Rifle
The gun consigned to me for T&E was typical of the kind of scout rifle Grizzly produces, all of which are strictly custom jobs built around the client’s choice of action, which can be supplied either by Grizzly or the customer. Grizzly will build a gun around any suitable action, but it recommends the Winchester Model 70 Classic short action or the Kimber 84M. Both, of course, are controlled-round-feed Mauser-type actions. Because these rifles are made to order, the customer can specify anything he wants, but, lacking that input, there is a fixed set of specs that go into a Grizzly scout rifle. Starting with the action, the face is trued, the locking lugs are lapped, and the rails are modified if needed and polished for smooth feeding. A special Scout-contour cut-rifled barrel by Danny Pedersen’s Classic Barrel & Gun Works with integral pedestal scope mount bases accepting Talley QD rings is installed. The OEM trigger is replaced with a Timney set at 2-1/2 pounds. The barreled action is then given a satin matte blue and Acraglas bedded into a Hi-Tech Specialties Kevlar-reinforced fiberglass stock with three flush-mount sling swivel bases to accept a supplied Langlois Ching Sling. A Pachmayr Decelerator recoil pad and a Leupold 2-1/2X IER scope in Talley lever rings are also standard. Last, the customer gets to choose between aperture iron sights or a muzzle brake.

That pretty much describes our .308 Winchester test gun, which was built around a Kimber 84M action, the lightest production-grade short action on the market. With its 18-7/8-inch barrel, its barrel-band front sight and ghost-ring-aperture rear, and Leupold’s 2-1/2×28 IER scope in Talley QD lever rings, the test gun weighed a wispy 6 pounds 13 ounces empty, and without its leather Ching sling. Overall length was just a hair less than 38 inches. All in all, with the exception of the blind magazine, it was right out of Jeff Cooper’s “The Perfect Scout Rifle” spec book.

Short But Sweet Testing
Whenever I’m testing any .308, I like to try at least one match load to compare with a mix of hunting loads, because almost invariably they turn in the best groups. So for this range session I chose to start with Black Hills’ “red box” 168-grain Sierra MatchKing BRHP load, with the full intention of following up with two more factory loads. As it turned out, this proved to be one of the shortest bench sessions I’ve ever conducted.

Summarizing the Scout
This is an extremely well built rifle assembled to the highest standards using the highest-quality components. The balance point of the rifle is exactly at the front guard screw so that, lacking a scope in the usual position, its wonderful one-hand-carrying qualities approach those of an iron-sighted Marlin 336 or Winchester 94, because it allows you to wrap your thumb over the top of the receiver. Even with my small hand grasping the gun at its balance point, my thumb came within a half-inch of touching my middle finger when carrying the gun at my side.

Over the course of firing a mere 18 rounds, the test gun obviously performed without a hitch. There were no failures of any kind with feeding, extraction or ejection, and the 2-1/2-pound Timney trigger was perfect, with no discernible creep; it just broke like a glass sliver.

Has my mind changed any about the efficacy of the scout rifle as an all-around hunting rifle? No. I will say, though, that this rifle can easily—and with a great deal of class—fill the needs of those several million hunters who hunt whitetail deer exclusively and do it under conditions where shots of more than 100 yards are rare. The 2-1/2X IER scope offers so little magnification that one naturally keeps the other eye open, and that provides a panoramic sight picture in which what you see through the scope appears to be of the same size as any other object in your field of view. Target acquisition is extremely fast, which makes the scout rifle

very well adapted to hunting dangerous game in close quarters, an application where I believe this genre deserves to be more popular. Replace the IER scope and aperture sight with a typical mid-range variable, and you have an all-around rifle that can take on any North American game short of the big bears.

A scout rifle, or a very close approximation thereof, can be had from Ruger or Savage for no more than the cost of a conventional rifle from those manufacturers, but if you demand the real thing, as prescribed by Jeff Cooper himself, then nothing short of a custom job like our Grizzly Custom Guns test rifle will satisfy you. It will cost you, though, as the test gun with all of the features described runs $4,750 using the Kimber M84 action, or $4,250 using your own action. For more information visit www.grizzlycustom.com.