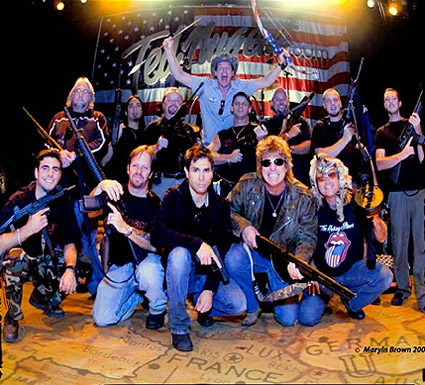 Anybody see what the evil Brady Campaign and other anti-gun cults have created? I personally have zero tolerance for evil and denial. And America had best wake up real fast that the brain-dead celebration of unarmed helplessness will get you killed every time, and I’ve about had enough of it.

Nearly a decade ago, a Springfield, Oregon, high school student, a hunter familiar with firearms, was able to bring an unfolding rampage to an abrupt end when he identified a gunman attempting to reload his .22-caliber rifle, made the tactical decision to make a move and tackled the shooter.

A few years back, an assistant principal at Pearl High School in Mississippi, which was a gun-free zone, retrieved his legally owned Colt .45 from his car and stopped a Columbine wannabe from continuing his massacre at another school after he had killed two and wounded more at Pearl.

At an eighth-grade school dance in Pennsylvania, a boy fatally shot a teacher and wounded two students before the owner of the dance hall brought the killing to a halt with his own gun.

More recently, just a few miles up the road from Virginia Tech, two law school students ran to fetch their legally owned firearm to stop a madman from slaughtering anybody and everybody he pleased. These brave, average, armed citizens neutralized him pronto.

My hero, Dr. Suzanne Gratia Hupp, was not allowed by Texas law to carry her handgun into Luby’s Cafeteria that fateful day in 1991, when due to bureaucrat-mandated unarmed helplessness she could do nothing to stop satanic George Hennard from killing 23 people and wounding more than 20 others before he shot himself. Hupp was unarmed for no other reason than denial-ridden “feel good” politics.

She has since led the charge for concealed weapon upgrade in Texas, where we can now stop evil. Yet, there are still the mindless puppets of the Brady Campaign and other anti-gun organizations insisting on continuing the gun-free zone insanity by which innocents are forced into unarmed helplessness. Shame on them. Shame on America. Shame on the anti-gunners all.

No one was foolish enough to debate Ryder truck regulations or ammonia nitrate restrictions or a “cult of agriculture fertilizer” following the unabashed evil of Timothy McVeigh’s heinous crime against America on that fateful day in Oklahoma City. No one faulted kitchen utensils or other hardware of choice after Jeffrey Dahmer was caught drugging, mutilating, raping, murdering and cannibalizing his victims. Nobody wanted “steak knife control” as they autopsied the dead nurses in Chicago, Illinois, as Richard Speck went on trial for mass murder.

Evil is as evil does, and laws disarming guaranteed victims make evil people very, very happy. Shame on us.

Already spineless gun control advocates are squawking like chickens with their tiny-brained heads chopped off, making political hay over this most recent, devastating Virginia Tech massacre, when in fact it is their own forced gun-free zone policy that enabled the unchallenged methodical murder of 32 people.

Thirty-two people dead on a U.S. college campus pursuing their American Dream, mowed-down over an extended period of time by a lone, non-American gunman in possession of a firearm on campus in defiance of a zero-tolerance gun ban. Feel better yet? Didn’t think so.

Who doesn’t get this? Who has the audacity to demand unarmed helplessness? Who likes dead good guys?

I’ll tell you who. People who trample on the Second Amendment, that’s who. People who refuse to accept the self-evident truth that free people have the God-given right to keep and bear arms, to defend themselves and their loved ones. People who are so desperate in their drive to control others, so mindless in their denial that they pretend access to gas causes arson, Ryder trucks and fertilizer cause terrorism, water causes drowning, forks and spoons cause obesity, dialing 911 will somehow save your life, and that their greedy clamoring to “feel good” is more important than admitting that armed citizens are much better equipped to stop evil than unarmed, helpless ones.

Pray for the families of victims everywhere, America. Study the methodology of evil. It has a profile, a system, a preferred environment where victims cannot fight back. Embrace the facts, demand reform and be certain that your children’s school has a better plan than Virginia Tech or Columbine. Eliminate the insanity of gun-free zones, which will never, ever be gun-free zones. They will only be good guy gun-free zones, and that is a recipe for disaster written in blood on the altar of denial. I, for one, refuse to genuflect there.