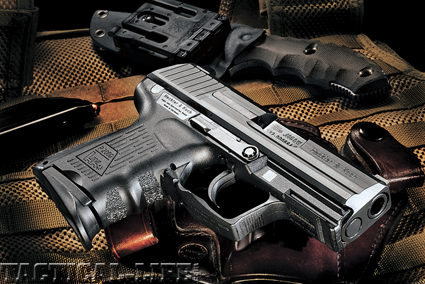 Heckler and Koch have always had a reputation for building some of the most durable and reliable firearms, which explains why they are used by police and military units all over the world. Their quality has also put them in high demand among civilian gun owners as well. While HK is well known for many of their full size tactical pistols, they also make several that are outstanding for concealed carry. 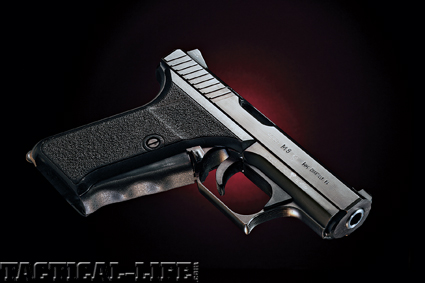 HK’s innovative P7 squeeze cocking pistol is a forged steel engineering marvel. While they are no longer in production, thousands of German police trade-ins have found their way to our shores and they make great everyday carry guns. The police trade-ins are the P7 PSP type pistols that use a heel magazine release. Although they are not quite as fast to reload as the “M” series P7’s, which use a magazine release that is located in a more traditional position, they do have several benefits that I believe outweigh that for carrying concealed. The PSP style P7 has no external levers or protrusions and they are very thin. They are totally ambidextrous. Because they are so flat they work very well when carried both inside the pants and in pockets. The unique action of the pistol requires 18 pounds of force to cock it with the squeeze cocker (and only a couple of pounds to maintain its cocked status). Until it is cocked, the trigger is totally disconnected. If the gun is dropped or the grip is relaxed, the P7 is automatically un-cocked and totally safe. Another advantage to using the P7 as a concealed carry pistol is that they are both exceptionally accurate and easy to shoot. Many small carry guns are very difficult to shoot at longer distances. Having a 9-shot pistol with the ability to easily engage targets at 25 yards is a huge benefit. Because of their unique operation, the P7 requires some dedication to learning to really use the system. This is often an issue that works itself out naturally. P7 owners tend to be very devoted to them, and they usually work themselves into the front of the rotation for daily carry.

HK P2000SK
The P2000SK is almost a polar opposite to the P7, using the latest technology to embody a lightweight, small, rugged and easily concealed pistol with good magazine capacity in high-performance calibers. They are very reliable and a great concealed carry pistol for both law enforcement officers and CCW holders. They also make a great back-up pistol for police officers that carry a P2000 or other HK pistol that uses compatible magazines. The P2000SK has many modern innovations such as back-straps that can be tailored to individual tastes, multiple options for the trigger action (the excellent LEM system or a traditional DA/SA function), an accessory rail, and ambidextrous controls.

The P2000SK is shortened from its full-size brethren in both muzzle and grip length. For those with adult-sized hands, the pinky finger will actually curl under the grip. The P2000SK is sized where it could be easily used as both a pocket or ankle pistol with appropriate holsters. Once a shooter has mastered the actual operation of the gun, the size is not a detriment to any kind of mechanical accuracy. This is true of every HK pistol reviewed for this article. Heckler and Koch pistols have a well-deserved reputation for exceptional accuracy.

HK45C
While the HK45C is not what we would normally look at as a “pocket pistol”, it’s a great design because a single gun can function as both a daily use concealed carry pistol to a suppressed full-size tactical pistol. The U.S. Navy S.E.A.L.’s also found this as well and have adopted the HK45C as a replacement for the MK23 SOCOM pistol. The HK45C is the result of HK’s work in development of smaller pistols for the special operations community due to new roles for our elite soldiers in which discrete carry is a need for unconventional operations against terrorists. Combined with the developments of these guns with input from Ken Hackathorn and Larry Vickers (Larry is a decorated Delta Force veteran and renowned gunsmith, while Ken Hackathorn is one of the finest firearms trainers in the world with extensive experience training special operations personnel). By using the input from endusers and experts, combined with taking the best aspects of previous HK designs, the HK45 and 45C have emerged as two of the finest .45 caliber combat pistols ever produced. With un-paralleled reliability, match grade accuracy, and exceptional ergonomics, both guns are winners.

The HK45C can be carried with flat magazine base-plates that make it smaller than most compact/midsize pistols, and they are easy to carry without “printing” in lighter clothing. By using the supplied extended magazine base-plates covered in a rubberized material, they are both easier to shoot and durable when dropped on hard surfaces. The owner can also carry 10-round magazines that are compatible with the full-size HK45. These can be had with an ugly, but very functional base-plate that covers the exposed portion of the longer magazine when used in the compact pistol. The HK45C owner can daily carry their gun with a flat base-plate while concealed, or switched to 10-round magazines to essentially convert it into a full-size gun, when concealment is not a need or factor. The HK45C utilizes a user configurable backstrap that can be tailored to the owner’s hand size. The HK45C also uses HK’s “o” ringed barrel that was previously available only on their “tactical” pistols. They are capable of superb accuracy. A factory threaded-barrel is also available for use with a sound suppressor or if the owner wants a little more velocity from today’s modern .45 loads. I carry mine exclusively with Federal’s 230 gr. +P HST that has a well-documented reputation for exceptional performance during actual shootings. I have several HK45C’s, and they are all disturbingly reliable with everything from training ammunition to high performance self-defense loads.

The versatility of the HK45C is seen further in its ability to be catered to an individual or organizations needs for specific trigger operation. The HK45C operation can be configured as DA/SA, S/A Only, De-cock Only, or with a light or heavy LEM (Law Enforcement Module) system. You can also get right or left-handed control levers or ambidextrous levers. This modularity combined with ambidextrous magazine and slide release levers make the HK45C a true “do-it-all” pistol.

Choices
Heckler and Koch offer a wide variety of pistols available to fill almost any need. All of the above pistols are extremely accurate and reliable, in easily carried sizes. They have the added benefit of all using magazines with capacities in line with the legalities of states with 10-round magazine bans. Many professionals chose HK guns who don’t compromise on selecting tools to stake their lives on. For more info, see HK-USA.com. 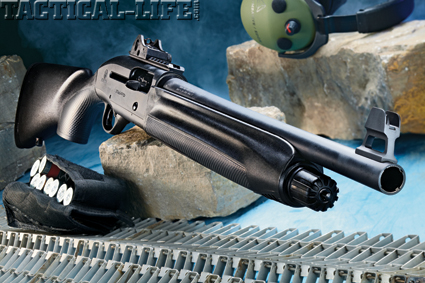 The Beretta Tx4 Storm shotgun is loud as thunder, strikes like lightning, and brings...