The advent of polymer holsters has meant that previously unimaginable methods of retention and release are now possible for law enforcement. Some recent holsters are truly ingenious – evoking the movie RoboCop with a sort of “the future is now” freshness.

On the leading edge of holster innovation is the Speed-Draw holster from Holster Tech Finland. This Level 3 holster is an aggressive new design that not only securely and comfortably carries a pistol, it also actively arms the operator at the push of a button.

You read it right; the Speed-Draw is spring-loaded and, at the press of a thumb button, ejects the pistol directly into the operator’s palm. 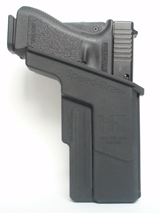 A Firm Foundation
One of the more conventional aspects of this duty holster is that it’s made from fiberglass-reinforced polymers. Thanks to a host of other duty holsters already in service, we already know what that means: lightweight, low maintenance and impervious to rot and mildew.

The Speed-Draw also offers clean, uncluttered lines and its contours give it a high-tech look. The Speed-Draw has a modular design so that it can be easily disassembled for routine cleaning or individual part replacement. Moreover, its belt fastener is infinitely adjustable with the included Allen wrench. The operator may adjust it to his or her preferred degree of cant and lock it in place. Further, there are two models offered: one with the belt fastener positioned high on the holster, the other with it positioned low, so the purchaser has a choice of getting either a high-ride or low-ride unit.

The Speed-Draw uses a locking mechanism that holds the pistol by the trigger guard. It will not release the gun until a thumb button, located on the outer surface of the holster on the side closest to the belt, is pressed. Security is further enhanced with an extra safety catch that renders the thumb button inoperable. The safety catch may be used at the discretion of the operator.

The Gizmo
Okay, let’s get to the star of the show – the ejecting mechanism.

To draw, the operator places his hand over the backstrap of the weapon. The Speed-Draw encloses most of the pistol’s frontstrap, so a firing grip is not possible with the gun holstered. However, the operator may lightly touch the area covering the pistol’s frontstrap just to quickly orient his hand. If the safety catch is engaged, the operator then slides it rearward, exposing a red dot and covering the green one. That done, or if the operator has opted against using the safety catch, he may draw the gun by simply pressing down firmly on the thumb button.

When the pistol was inserted into the holster, a spring was compressed and locked into the compressed position. Pressing the thumb button releases the trigger guard and spring, ejecting the gun into the operator’s palm. This all takes far less time to execute than it does to describe. A video of the draw sequence is available at www.holstertechfinland.com.

Reliability
The spring force is considerable and the system works exactly as designed, which allows it to actually propel an unobstructed gun upward about four inches with the holster in the vertical position.

There were no failures of any kind during testing. According to the company, the mechanism has worked 25,000 times without failure. The Speed-Draw’s metal parts are Teflon-coated to promote longevity and reliability. 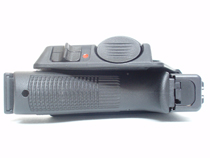 Matters of Concern
There is more than a little “gee whiz” factor at work here. This is something new and, well, cool. However, as we have continued to examine the Speed-Draw, issues have arisen.

First, the mechanism is very noisy. A law enforcement officer sneaking up on a potentially dangerous suspect is going to give himself away when he presses the thumb button. The clatter of the spring releasing and the gun moving against the holster’s interior is considerable. The company says that this is due to the Speed-Draw’s hollow walls and that activating the release button slower and more softly reduces the sound. We tried that and while it reduced the sound, it did not eliminate it. Also, how much “touch” is a nervous officer going to have in a tense situation?

Secondly, the safety catch is both good and bad. It functions as designed, but also slows down the draw so much that any speed advantage offered by the spring mechanism is negated. Sure, it’s optional, but should it be? Whether it should be engaged or not gives a law enforcement officer one more thing to think about when he should be focused on the suspect.

The company explains that the safety catch is to be used in situations where the officer is exposed to the general public and does not have control of his immediate surroundings. The idea is that he can take the latch off safely before going into a specific, known hostile environment.

Because you cannot take a firing hold on the gun when it’s in the holster, you have to position your hand vaguely, with it hovering over the gun. Or else you orient your hand by placing your fingers on the portion covering the frontstrap. While doing that, you have to find the safety catch (if you’ve engaged it) and then find the thumb button. There is a discomforting vagueness in these movements at a time when simple, concrete movements better serve.

Again, the safety catch seems to be the primary culprit. The draw is much smoother and quicker without it. It is not part of anyone’s natural draw stroke and never feels right. Without it, one simply moves his hand as if to make a conventional draw. The thumb naturally arrives at the thumb button well before the web of the hand reaches the backstrap. In one quick movement, the thumb depresses the thumb button and the pistol is thrust into the palm.

The last concern consists of drawing in less-than-ideal circumstances. A conventional holster, once all the retention devices are released, still often holds a gun in place with nothing more than a friction fit. That might not be much, but it still requires a firm, positive pull by the operator. What happens to the officer on the ground wrestling with a suspect and groping for his sidearm when he (or the suspect) depresses the Speed-Draw’s thumb button while the officer’s hand is out of proper position or is injured? The gun is not just going to sit in the Speed-Draw. It is going to be propelled forcefully out of the holster where it belongs to whomever can get their hands on it.

Granted, this last concern is hypothetical, but nonetheless a serious worry.

An immediate thought we had was that the Speed-Draw concept might be very suitable for speed shooting competition. That may be an area that the company should investigate.

A Novel Piece of Gear
Holster Tech’s Speed-Draw is a clever, well-executed example of the holster marker’s art. If nothing else, it is a splendid exercise in the design and execution of a new concept in duty holsters. Whether that concept is valid, safe and serviceable on the street is something that is yet to be determined.

That said, a holster that thrusts the gun into your hand, well, that’s still pretty darn cool.