0
SHARES
16
VIEWS
Share on FacebookShare on Twitter
The shotgun, a 12-gauge Mossberg 590 in this instance, has power and simplicity, but considerations of function, environment and individual capabilities are critical to making it your primary weapon for home defense. Sean Utley Photo.

As a weapon of personal defense, the benefits of the shotgun are undeniable. The most obvious is power. At close range (say 10 yards), an attacker shot accurately with 00 buckshot will have to deal with the equivalent mass of 4.5 rounds of 9mm pistol ammo—all at once. The impact alone is likely to permanently incapacitate most mortals. But is it right for everyone?

In many ways, particularly when compared to a magazine-fed AR or a semi-automatic pistol, the shotgun will at first, seem simple. Big clunky cartridges, big round holes to put them in, and actions so loose and open that even a first-timer can perform basic functions in an intuitive way. Countless American homes have ‘Grandaddy’s’ side-by-side that only requires breaking the action at the trigger and loading the rounds straight in to each barrel. Click, it’s closed—safety, trigger, check—point and shoot. Its’ the equivalent of going to the fat, baby Lego blocks from an erector set. The parts are so meaty and simple, how could you go wrong? The answer has many layers and even more misconceptions.

Let’s start with the most visually obvious: wield-ability. Typically, shotguns are longer and particularly when fully loaded, heavier than most ARs and certainly more so than handguns. Getting the weapon up and on target requires space, strength and coordination. Can your 130-pound wife pick up your fully loaded Bennelli Super Nova loaded to the gills with 3.5-inch goose shot, chamber a round, and engage an attacker? Is there adequate physical space in your bedroom to do so? What about the bathroom? Further, can she get it from a kid-safe location without pulling sweaters, hidden Christmas presents, and the three pairs of shoes she just bought on sale down on top of her head? One might argue that the shotgun can be used as a physical weapon as well as a firearm. OK, when was the last time you delivered a vertical butt-stroke to anything? Twenty years ago in basic training? What about her? Likely never. Perhaps you sleep in an open bay, have no children, hang your shotgun fully loaded over your bed, and have a wife who is a former Marine and a Krav Maga instructor, so none of these issues come into play. Well, this article isn’t for you anyway, and most of us live towards the other end of the spectrum and need to ask tough questions and contemplate the sober answers about the physical constraints of our homes and loved ones. 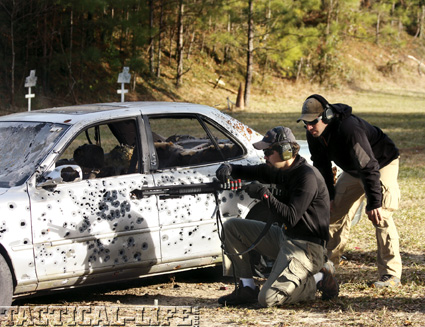 Under the watchful eyes of Magpul Dynamics Instructor Mike Olivella, a student works through a shot-to-slug changeout to engage a distant target through a vehicle. 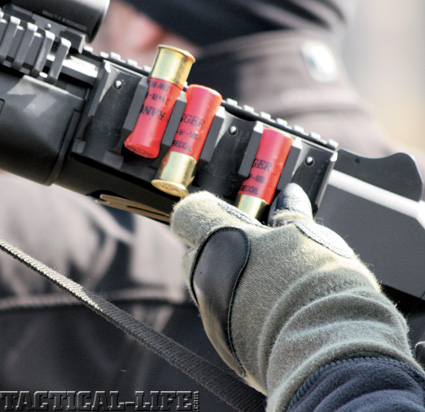 One Up, Two Down: This purposeful offset shell placement facilitates efficient shot-to-slug changeovers (brass up) and re-loading the magazine (brass down).

Now consider the control of rounds downrange. No doubt, a chest full of buckshot from across the bedroom will put an end to most home invaders. But what lies beyond your bedroom? Where do your kids sleep and what are the walls made of between you and them? Do you believe you can control all nine 00 buckshot projectiles, or in the event of a miss, feel comfortable and find the space behind the target expendable? Dial up to a slug and you increase power but also the requirement for accuracy and you risk over-penetration. Dial back to birdshot and you reduce the lethality of your shots as the range increases. Keep in mind that at extreme close range, birdshot is still very tightly packed or may not have even detached from the wad column and, upon first impact, might as well be a slug. Round choice is a continuum, and you need to decide where circumstances lie within it.

Reliable And Flexible
With healthy respect given to the factors mentioned previously, consider the other side of the shotgun coin. Shotguns are relatively inexpensive, widely available, lightly regulated and simple to operate in a basic way. On most varieties, there are relatively very few moving parts and maintenance requires little expertise and even less time. Because of its inherent close range role, optics can be as simple as a single bead welded to the end of the barrel, thus reducing the absolute necessity for optics or range time to zero-in sights. Patterning is critical, but more on that later. Most of all, the shotgun can deliver a variety of munitions. From tiny skeetshot to large rifled solid slugs—a single shotgun can be used to effectively shoot everything from clay disks to big game, all with just a simple change of ammunition. No AR and no handgun can come close to that. This is the primary reason the shotgun is, and will remain a viable option for civilians, law enforcement, military and outdoorsmen.

Consider the following impact energy comparisons (measured from the muzzle) between a 00 buckshot round other common caliber choices. Realizing of course that many ballistic factors change over distance, but at close range, the shotgun is a powerful and lethal choice.

Advanced Training
So you have decided the shotgun is a fit for your personal defense needs. What next? Training. I attended the Magpul Dynamics, Dynamic Shotgun course held at Roberts Range, in Louisiana to get Chris Costa and Travis Haley’s take on mastering the shotgun. Magpul Dynamics recently released their fourth instructional DVD set, The Art of the Tactical Shotgun, so I was primed on their curriculum and philosophy. Most of the attendees were LEOs or experienced 3-gunners, but there were more than a few civilians who wanted improve their skills. Individual shotgun setups varied from off-the-shelf Mossberg pumps to highly customized Benelli M-4 auto loaders. I ran a Nighthawk Custom 870 12-gauge pump with a Vang Comp barrel, Picatinny rail-mounted ghost ring sights, a GG&G sling mount and Hogue stock. Nighthawk Custom’s work on the actions and the shortened stock made this weapon smooth, fast and intuitive. I would need all the help I could get as we would be working through a variety of functional problem solving and shooting scenarios.

Along with the appropriate safety briefs, the Magpul Dynamics team methodically worked through each student zeroing and patterning his shotgun. I ran Hornady TAP Buckshot and Winchester slugs. The results were telling. Many experienced shooters had made assumptions about their weapon systems with regard to both basic accuracy and the performance of their respective ammunition choice. Accuracy varied more between ammo manufacturers than shotgun types. This takeaway cannot be stressed enough—zero and pattern your weapon with a consistent brand of ammunition, as over distance, the performance will vary dramatically between loads.

Unlike mag-fed ARs and pistols, shotguns load and cycle rounds in a manner unique to each manufacturer. Magpul Dynamics did thorough work of teaching to the guns their students carried—both pumps and autos—not simply demonstrating with their own personal and familiar setups. This is an important point, as with a shotgun you are either “shooting or reloading” so not only must the procedures be practiced, but they must be practiced on your respective model of shotgun. If you switch shotgun manufacturers, guess what: safeties, mag tube/bolt releases, and cycle procedures are likely different.

Additionally, the drawback of the lager cartridges is that they eat up precious real estate on the weapon and the gun has to be fed constantly. This then requires practice on procedures to feed from a variety of shell carriers both on the weapon and on the shooter. I found the set up of a four-shell horizontal belt caddy (the shells lie horizontal) along with a four-round caddy mounted directly to the shotgun opposite the breach. The weapon-mounted caddy was particularly useful in the many shot-to-slug changeover drills we ran. The slugs could be carried ‘brass-up’ to be pulled upwards and loaded directly into the open breach. The remaining slots could be filled with shells mounted ‘brass-down’ and pulled down and so more easily loaded into the magazine. 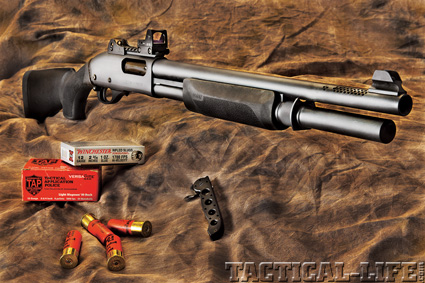 Shot-To-Slug Drill
The shot-to-slug changeover is likely the single most important drill to master in fighting with the shotgun. The ability to adjust to targets at distance (slugs having greater range and accuracy) as well as target type (barricades or heavy foliage) extends the operator’s survival rate whether on the battlefield, in the streets as an LEO or in one’s home. Be a one-trick pony with the shotgun and you invite tactics that leave your safety in jeopardy.

The Dynamic Shotgun course is not intended to be tactics training. Rather, it is a course designed to start the operator on his way to mastering the weapon system and its capabilities. However, the class worked through scenarios of engaging multiple targets at various ranges, requiring shot-to-slug changeovers and problem solving to determine the appropriate choice while shooting through and over vehicles, and around barricades and obstacles. We also ran several drills to transition to secondary weapons where I ran a Wilson Combat Spec Ops 9mm. It was a quick and snappy complement to the 870.

You HD Shotgun
One concept the Magpul Dynamics instructors challenged the students to consider was their choice of the shotgun as a home defense weapon. They dedicated a segment in their instructional DVDs to an experiment whereby instructors moved through a simulated hallway shoothouse and shot a man-sized torso target from 15 feet. The shot placement, while profoundly combat effective on the target, resulted in just over 10% of the buckshot balls missing the target. Using a typical 00 buck round, that is between six and seven hits on target and one to two flying past. So it begs the question: Can you afford a 10% miss rate in your home? Consider it carefully both in your choice of weapon and if its a shotgun, your choice of munitions (larger shots have greater penetration). It is the duty of the gun owner to master the function of his weapon and be aware of its pros and cons.