0
SHARES
1
VIEWS
Share on FacebookShare on Twitter
My passion for stealth started when I was a young bow hunter. Examining bow-hunting books of the late 70’s, you will notice that the concept of stealth was starting to catch on in that sport. Gone were the jeans and 1948 leaf-pattern fatigues. Most hunters were starting to use the new M81 Woodland and Vietnam-era Tiger Stripe. Even then, a growing concern was developing among the civilian camo experts. They were testing military camouflage patterns and reporting the lack of performance by the Army-fielded ones.

During this period I entered the Army in my home country of Spain. We had some very good and battle-proven patterns based on old German SS-Leibermuster. The Spanish amoeba pattern was tested in the desert war with the Sahara Polisary rebels and later on, against the Moroccan regulars. The design proved itself very effective. That performance did not save it from being phased out, however, in favor of the less-effective Woodland pattern. 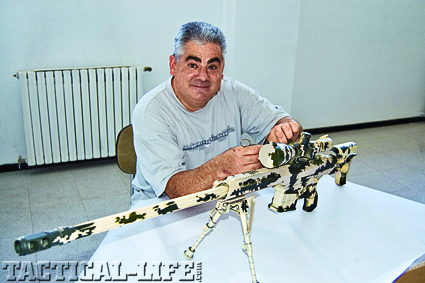 The same cycle is going on today. The military is way behind hunters, paintballers and civilians in general. Most military professionals will camouflage their equipment very crudely, but very efficiently as time is measured against results. Only when the Army brass buys the equipment fully camouflaged from the factory, do common soldiers go into the field with their rifle, radios, and all the equipment camouflaged in their issue pattern. It is the exclusive domain of very select SF units to expend the independent effort in fully camouflaging themselves and all their kit.

At first I thought that this article should be a step-by-step explanation on how to camouflage your Barrett. Then I realized that the information was available on the web, and that the actual process was not the really important issue.

The issue is how to do it within a military or police environment. Bureaucrats rule the world and our military/law- enforcement hierarchy is no different. If you have 10 Barrett rifles inventoried with the regular Parkerized finish, many snipers will get into trouble in no time if they dare to paint them. On the other hand, amateur warriors can, and do, paint all their kit in their preferred patterns.

You have basically two options: the non-removable finishes and the removable ones. Between them they cover most of the possibilities.

Temporary If Necessary
If your unit has a strict doctrine against painting your equipment, you should use removable paints from Brownells, Duracoat, or NFM. Of the removable finishes there are two that are very effective and easily obtainable: McNett Camo-Form tape and an environment-adaptable Ghillie rifle wrap. The only problem with these is that all the tapes and “ghillie” kit you stick to your rifle, detract from its lightness, ergonomics, and can be a liability.

But why is it so important to disguise your sniper rifle? Barrett builds the finest semi-automatic .50-caliber rifle, the Model 82A1. But even though it is has been refined like a Swiss watch, no manufacturer can hide the fact that all big bore sniper rifles are very big. The Barretts are not the biggest ones out there, but for the Special Forces soldier whose survival depends on stealth, making a Barrett “invisible” is a hell of a task. The same goes for the new Barrett Model 98B. It is extremely light, but it is still very long. The best way to get yourself killed in combat is to allow the enemy to know you are a sniper, the predator they fear most. 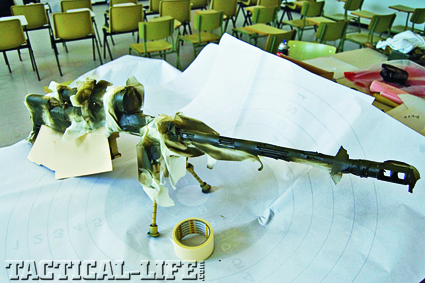 Painting sniper rifles is one of the maintenance jobs I have most fun doing. I see it as a challenge. Adapting the rifle to an environment and making that straight, long barrel as invisible as possible is really difficult. I approach this as a simple task to be achieved with minimal effort. I would like to have the time for an eight-color Multicam paint job, but I do not. Normally I get along with two colors, which is simpler and works nearly as well.

Normally all snipers paint their rifles with the well known Krylon Camo or HS Camo flat paint. It is a durable finish that can be applied nearly everywhere. It works fine and it is economical, but there is a much better way. Duracoat is a finish that is applied with a very precise protocol. It can replicate any pattern that can be painted and it is extremely durable. Forget about chemically stripping the sniper rifle for inspection; the finish will stay intact forever. Along the same line, use the best finish available: Cerakote. It has a limited color catalog, and needs a long curing time, but is a step above Duracoat. I have both finishes on two rifles which I own. The “ceramic” finish seems more durable, corrosion resistant and less reflective. 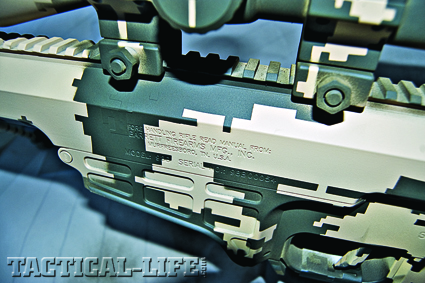 For this article I have painted the Barrett Model 98B that the Spanish Army is using for their .338 Lapua Magnum tests. They asked me to demo a camouflage pattern for a possible deployment to Afghanistan. I em­­­­­­ployed a two-color desert digital pattern using Krylon, NFM re­­­­­­movable paints and pre-made stencils. With this two-color scheme you can have the rifle camouflaged in a day, including base-coat drying time. If you have the extra time and resources, go for a more complex Multicam pattern. But if you are a professional sniper with a tight schedule, then this quick camo job, will be more than enough.

To learn more about the Multicam process, search for Charlie-Echo posts at Special Ops Paintball Forum and Chunger posts at calguns.net.

The Best When Necessary
You will see all kinds of complex procedures in the above links, and if you have the resources I advise you to follow them. But once again I am a practical guy and will tell you about my tried-and-true quick system. I do not like to disassemble my rifles for painting as the coat tends to produce all kinds of mechanical problems. I paint them assembled and masked. I remove only the parts that can be a liability to the process, for example the rubber buttplate. Paint on rubber will chip so easy that there is no use in painting it at all. 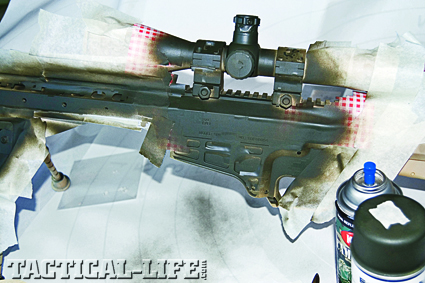 First, clean it thoroughly with rubbing alcohol. Then clean it again. The adhesion of the paint depends on the complete elimination of surface dirt and grease. You can lightly sand the plastic surfaces to promote adhesion, if needed.
Never spray outside as the wind will blow your paint and it will be wasted. Use a room that can be conveniently cleaned afterwards. The paint will turn to dust in a foot or less from the nozzle, so you need to protect the support you use for the rifle and that is all. Be ready for a general cleanup as the room will be full of paint dust upon completion. Easy to clean, but dust after all. Next, hang the masked rifle from the ceiling or even from a coat hanger.

The first step is to paint the base coat, either tan or coyote for desert. Use medium green or olive drab for forest. Allow it to dry as per paint manufacturer recommendations, and then start with the pattern. If you want to do it professionally and quick, you can purchase pre-made masks from bulldogarms.com. If you are of an eco­­­nomical inclination, then get some masking tape to replicate your selected pattern, and cut it yourself.

After masking, apply another blending to the rifle with your selected color. There are some parts of the rifle that need to remain the same base color. Some parts need to change radically at the mask line, and other areas need to blend in. The best method is to combine all techniques in an imaginative way. Do not be shy: Paint it.

You will discover that it is actually much simpler than it looks. It is just a matter of painting and masking one sequence after another, proceeding step-by-step, and with a pattern plan. Follow your desired pattern, copying it loosely from a pair of fatigues. Do not go crazy with unnecessary details. Balance time against detail and decide how far you want to go. If you screw up, let it dry, sand it, add some base paint over the part and start again.

It is fun, simple and effective. If you are conservative with colors, patterns and details, it is also quick. Making your Barrett invisible is not that difficult.