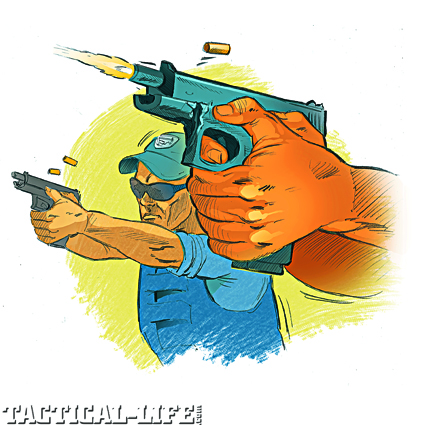 Taking One For The Team

The Pennsylvania State Police’s (PSP) Mercer Barracks (Mercer County, PA) recently responded to a call about a gunman. The shooter, a mental patient, got the drop on our PSP Troopers and shot one of them directly in the holster. The round-nose .38 Special bullet struck his GLOCK 37 in the forward lower front receiver and recoil spring assembly. It damaged the rod and spring badly. The PSP trooper was still able to get the first round off from the pistol and, with the aid of the other officer, put the shooter down. The one PSP trooper got a scratch to the hand and the other nothing.—Cpl. Dean C. Lawrence 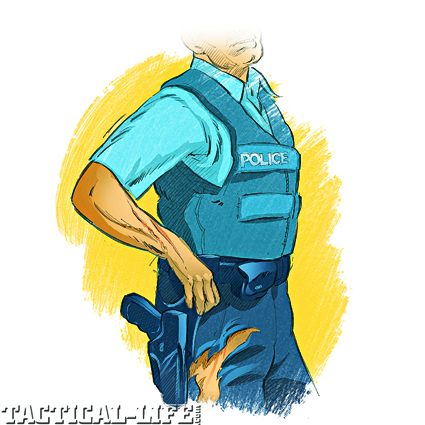 We all know that GLOCKs are tough, but this story might come as a surprise to even the most ardent fan of these hardy pistols. Marlin Weisheit, chief of police in Chandler, IN, has a GLOCK 22 in .40 that has an interesting history. “I now say, if you are going to take a hit with a 12-gauge deer slug at 30 feet, you want to take it in the GLOCK,” he wrote in a recent letter to GLOCK, Inc. You read that right. Officer Weisheit took a hit from a 12-gauge slug directly in his GLOCK duty pistol. The pistol remained surprisingly intact after this catastrophic hit, with three rounds going off—one of them being the chambered one. Once all was said and done, Weisheit’s injuries consisted of some burns to his side and some scrapes and scratches from rolling over the gravel and pavement. He was immediately coming up to his feet as his back-up was returning fire at the suspect. “Before this incident, I was always a big fan of GLOCK, but ever since this happened I have even more respect,” he continued the letter. “Thanks to you all for building the best weapon for law enforcement.” I think it is safe to say that GLOCK, Inc., is glad that their product was there to help him that day.—Michael O. Humphries 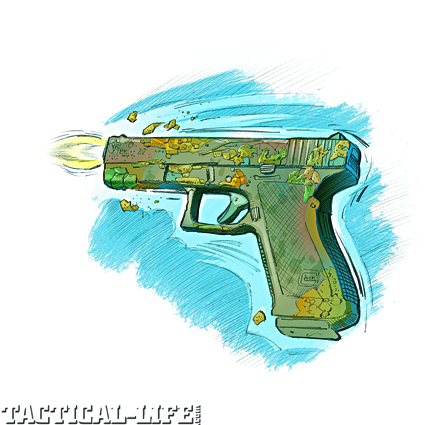 GLOCK reliability and durability are both well documented, but some stories really jump out at you. Here’s a letter of thanks that GLOCK recently received that truly hits upon the durability factor: I had the opportunity to go on an inexpensive cruise out of Galveston, TX in September 2008. My wife and I drove to Galveston and parked our car at the Lighthouse parking lot, only about two blocks from the ship dock.

Before leaving for the ship I locked away my GLOCK 22 in the tire boot of my Jeep Commander as well as the magazine and ammunition. We boarded the cruise ship on the 7th and headed for the Caribbean. Fortunately for us, unfortunately for many others, we watched as Hurricane Ike moved northwest towards Galveston as we sailed eastward towards Jamaica. Ike struck Galveston on September 13. We watched the news reports on TV waiting to see our Jeep floating around the city. Never saw it, but when we arrived back home, we learned that our vehicle, along with thousands of others were towed to an impound lot in Houston.

A buddy of mine, through another buddy of his, knew a friend in Houston (a retired Houston lawman) who did the favor of retrieving the pistol from my Jeep. He sent me an email with photos of the gun. Unbelievable—it was rusted shut! The slide wouldn’t budge. The man, who at the time was involved in cold case murder investigations for the DA’s office, was able to take my loaded, rusted gun to a test tank. When the trigger was pulled it fired and it loosened the slide. The gun was then cleared and unloaded. Collectively, no one could believe that the gun actually fired after seeing the condition of the other ammunition in the magazines. The gun has since been sent back to me. It spent about five weeks in salt water. I’ve got to say, it is pretty remarkable that after all that time under those harsh conditions, that my GLOCK still was able to fire.—Donald L. Wehmeyer, M.D. 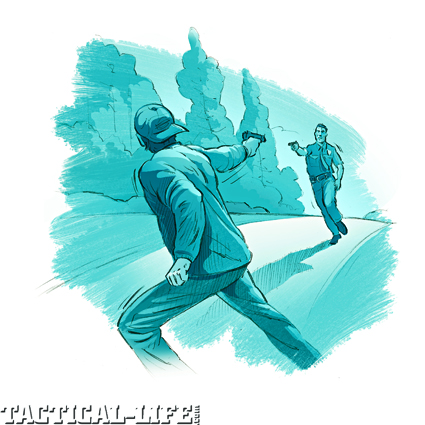 I am a member of the New York State Police stationed in Endwell, NY. On July 19, 2008, I pursued a suspect that was reported to have had a gun. The suspect fled the area on a bicycle and led me on a pursuit through local streets. The suspect struck my car while on a bicycle and continued to flee on foot. Once the foot pursuit was initiated, the suspect produced a handgun from his waistband and began to point it toward me. I then drew my GLOCK .45 G.A.P. sidearm and fired six shots, striking the suspect four times. This put him down, decisively. I just wanted to thank you and your company for producing a gun that has the stopping power needed to stop a threat. Thank you for helping save my life.—Trooper Michael J. Woytach