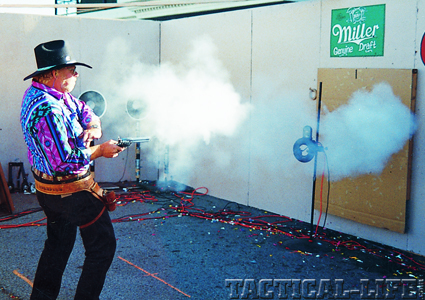 A younger Dunham performing the drop trick at a chuck wagon dinner show.

In the mid-1950s, I became fascinated with the Colt SA revolver while watching many of the then new “adult” TV Western series such as Gunsmoke, The Life And Times Of Wyatt Earp, Have Gun Will Travel, The Rebel, Bat Masterson, Rawhide and The Virginian. It wasn’t long before I got involved in the sport of Fast Draw, joining the Shawnee Fast Draw Club and starting with a Colt .22LR Scout SA and a home made Fast Draw rig. I was envious of the professional Fast Draw exhibition shooters such as Dee Woolem and Joe Bodrie, who made a living touring the US, demonstrating the Fast Draw. Many of us dream of becoming a professional shooter, but few of us are successful. One of the few is Jim Dunham, who’s been making a living with a “Gunfighter and Fast Draw” act for close to 40 years. I first learned of Jim when I read an article written by him. Recently I purchased a nickel plated second generation Colt SAA .45 with a 4.75-inch barrel, which had been tuned for Fast Draw by “ Arizona Thumber” Bob James and used as one of a trio of Colts by Jim Dunham.

I was fortunate to witness one of Jim’s shows at a Fast Draw Reunion in Tombstone, Arizona, several years ago. For those who have never had the pleasure of seeing Jim perform, he’s one of the performers on the videotape Gunplay, which belongs in every CAS shooters’ video library.

I contacted Jim to obtain verification that this Colt had once been one of his, which he verified. He also supplied me with a spare Alfonso of Hollywood number 4 style Fast Draw holster that he had used with my Colt. I took the opportunity to interview Jim Dunham for Guns Of The Old West.

GOW: Jim, welcome to GOW. It is a pleasure to visit with you and I consider it a privilege to have one of your personal Colt SAs in my small collection. Please tell us how you became involved with Fast Draw.

JD: Mr. and Mrs. Bell ran Bell’s Gun Shop in Franklin Park, Illinois, and sponsored one of the first Fast Draw clubs in the mid-west. Their son, Junior Bell and author/Western historian George Virgines, founded the Fast Draw club, which met and practiced on the shooting range in back of the shop. I joined the club when I was 14 years old, and had to have approval, as I was a minor. Junior was very good at the thumb cocking style of Fast Draw and he taught me. I began with a Crosman “Single Action 6” CO2 powered revolver until I was old enough to have my own Colt. After graduating from high school in 1961, I went to college majoring in art in Colorado. While there, I shot with the Boulder Sidewinders FDC in Bouder from 1961 to 1965. 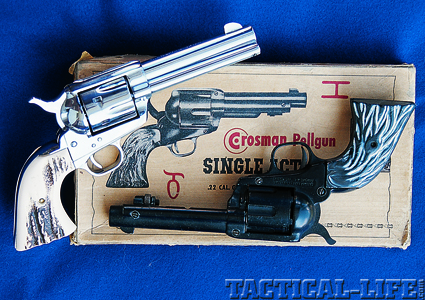 The Colt is shown with a Crossman CO2 pelletgun, a popular Fast Draw training gun.

GOW: I also started in Fast Draw with a Crossman SA CO2 sixgun. Did you shoot in competition?

JD: Yes, I shot in several Fast Draw contest. I developed a slightly different thumbing draw, where for safety, the gun was not fully cocked until it was clear of the holster. My best self start time was 0.12 of a second. My reactions are only average, so my best reaction times, hitting a silhouette target with wax bullets, were in the .40s (.40 – .49 of a second).

JD: I had three matching second generation 4.75-inch nickel .45 SAs, one of which you now have. I always use nickel guns in my act, as they look so much better on stage. And I have a first generation Colt I use for CAS matches. I have used only genuine Colts until recently, and still use my matched pair whenever I drive to an engagement. But when I must fly, I leave my Colts locked up at home and use either a matched pair of Cimarrons or US Firearms SAs.

GOW: How did you end up doing a Fast Draw and Gunfighters show?

JD: While in college, I took an acting class and fell in love with performing. The head of the theater department told me they had many requests for Gunslinger shows from organizations like Rotary Clubs, and knowing of my Fast Draw interest, he suggested that I might work up such an act. In 1965, they referred me to the Chamber of Commerce in Estes Park, Colorado. The Chamber sent me to a local chuck wagon dinner show, where I started making $10 per night. I was with them for nine summers, and performed a similar show for seven summers in Colorado Springs and 11 years in Arizona. These were live shows for tourists. 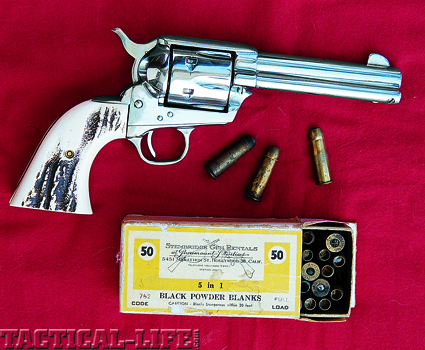 Jim Dunham used his second generation Colt SA .45 with Hollywood 5-in-1 blanks, while performing his Fast Draw and Gunfighter shows.

GOW: How did you get to Hollywood?

JD: In 1967 I was in Los Angeles visiting friends. One of them suggested that I try and sell my gun skills to the studios. I ended up at 20th Century Fox, performing with the Gunfighters for the studio tour shows. We performed on the movie set used to film Bandalero, which starred Dean Martin, Jimmy Stewart and Raquel Welch. I continued with the studio show until I received greetings from Uncle Sam, when I was 25 years old. I was sent to Germany in the US Army, but was able to continue my Fast Draw and Gunfighter act there. I was forced to keep my Colts locked up in the armory, checking them out to practice or do a show. One time when I checked them out, one was broken, as I recall a locking bolt. Someone assigned to the armory had been playing with them. I wrote to my mother and asked her to contact Mrs. Bell and see if she had the needed part. Bell’s did not have the part in stock, but Mrs. Bell had one removed from a new in the box Colt and gave it to my Mother to send to me.

GOW: Now that is service. Who tunes your sixguns?

JD: Bob James has been tuning them since 1974. I was performing my show at the Dick Van Dyke Studio in Phoenix, Arizona. A local newspaper had run an article describing me as the Fastest Gun in the World, a claim that I have never made. During one show I noticed these two guys glaring at me from the audience. When I asked if there were any questions, one of them asked if I had heard of Thell Reed? I replied that I knew of Thell, and that he was probably the fastest man ever with a SA Colt and live ammunition. This guy said that he had beaten Thell. Following the show, the two came back stage to visit. Showing them my Colts, they asked who tuned them? They then referred me to Bob James to super tune my Colts. Bob has tuned all of my SAs since then.

GOW: Those two guys were my close friends Claude Gosney and Ron Phillips, two of the greatest shooters in the history of Fast Draw. And Claude did outshoot Thell Reed to win the first and only Thell Reed Live Ammunition World Championship Leatherslap held at the Apacheland Movie Ranch in 1972. Whose leather do you use?

JD: I started with the legendary Arvo Ojala rig, and also had an Ed Bohlin rig with the long drop built into the gunbelt. While in Los Angeles, I met Andy Anderson of the Gunfighter Shop, and used his rigs exclusively until he retired. I favored Andy’s rigs because they were as fast as any, but were trimmer and lighter in weight, and I found them to be more comfortable for long hours of wear. After Anderson retired, I used double rigs made by Alfonso of Hollywood. I also have two Ernie Hill Speed Leather rigs. Ernie called me while I was appearing in Phoenix, and he ended up making me both a brown and black double rig. After visiting with Alfonso’s son Omar Pineda several years ago at an NRA Con­vention, I have been using a beautiful hand carved double rig with nickel silver spots made by Omar. I now use this rig exclusively for Fast Draw shows. My CAS gun leather is made by Shaky Jake Johnson out of California.

GOW: I believe you have been a regular entertainer at EOT. How many years have you been at EOT? 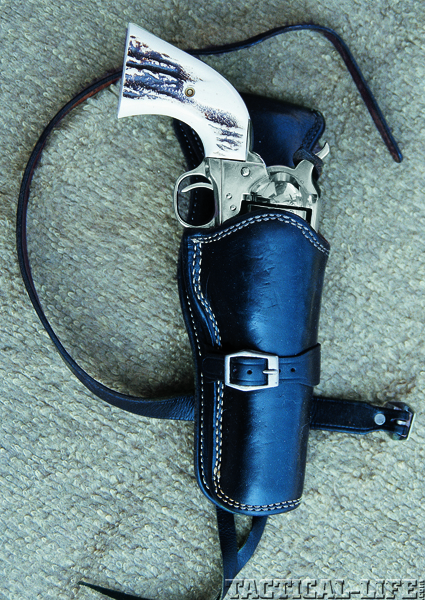 Dunham used this Alfonso of Hollywood number 4 steel lined Fast Draw holster with the Colt in his shows. This was a spare holster for a matching double rig.

JD: I have been at EOT almost from the beginning. For my first four or five years there, they let me shoot free, so I did not join SASS. Deciding that if I was going to be a regular, I joined SASS as Kid Rio. Kid Rio was the Marlon Brando character in One Eyed Jacks. (Author’s note: Dunham does a right on impression of Brando’s Kid Rio.) With SASS’s emphasis on historical accuracy, as well as the Hollywood version of the West, I have developed a one man show as Wyatt Earp, as well as a one man “Old Gunfighter” show. In addition to EOT, I perform annually at Mule Camp and it is the only major match that I both shoot in and entertain. And I am a member of the local Cherokee CAS Club.

GOW: What type of shows do you do?

JD: That depends on who books me. I want to entertain, while using a lot of Hollywood history and humor. I do not attempt to be the fastest draw, but will slow down just a bit in order to ensure a flawless performance. I demonstrate speed both by dropping a soda can from the back of my gun hand and firing a shot before the can hit’s the floor, and by the handclap draw. But when I perform the handclap, I place my gun hand between the outstretched hands of the volunteer. I then draw and sweep my Colt between their hands before they react and clap their hands together.

GOW: I have seen your performance on the video Gunplay. Are there any other videos that you are on?

JD: No, though I was a script advisor on the movie Tombstone. And I was to have a part in Tombstone, but it was cut, though my name appears in the credits. And I have appeared on the History TV Channel’s Tales Of The Gun. I hope to be able to produce my own video.

GOW: So what is new with Jim Dunham?

JD: Currently I’m excited about being associated with a local museum, the Booth Western Art Museum, as Historian and Director of Special Projects. And I still enjoy performing my one-man show, Trails Plowed Under, portraying the legendary Western artist Charlie Russell while painting a water color of a bronco rider similar to his work.

GOW: Jim, thank you for sharing your time with our readers, and I will treasure having one of your Colts. 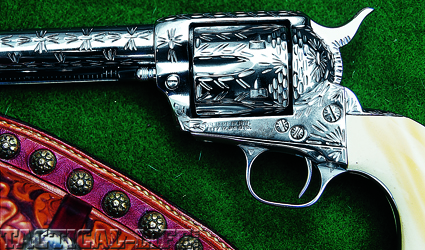 A Pair of Sixes to Draw To

A younger Dunham performing the drop trick at a chuck wagon dinner show. In…