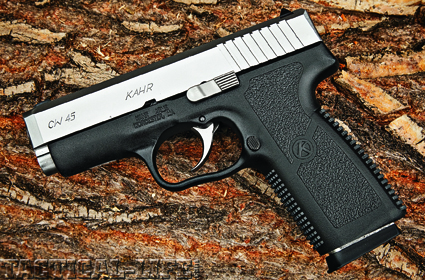 While the newer .380s are a delight to carry, most shooters are familiar with the adage: “Never take a knife to a gunfight.” The .380 is a step up from a knife—but not a huge step. Carrying a .380 or even a .25 ACP pistol can be comforting. However, if you’re still concerned about protecting yourself in a deadly confrontation, you want a bigger gun—the bigger, the better!

Ever since the Army trained me to use a 1911, I’ve been a fan of this great gun and the ammo it shoots—hard-hitting rounds that penetrate well and pack a real punch. I have a handful of both factory and custom 1911A1 pistols, practicing with them every chance I get. While the right holsters make it possible to carry a 1911 fully concealed, the gun’s bulk and substantial heft make daily carry problematic.

Kahr came up with an excellent answer. The CW45 has a locked-breech, tilting barrel design very similar to that used in the venerable 1911. Disassembly is an even simpler process than the 1911 requires. However, the Kahr operates in double-action only (DAO) mode and is fired by a striker—not an external hammer.

Fitting the gun’s innards into such a compact package was a real engineering feat. One space-saving innovation was relocating the feeding ramp slightly to the left of center. In addition to reducing the height of the frame, it created extra space for the operating system. While the feed ramp is no longer centered, it funnels cartridges into the chamber with excellent reliability.

The slide is machined from stainless steel, while the polymer frame reduces weight without sacrificing needed strength. The stippled grip feels good in my hand (unlike pistols with much blockier grips), and the gun points very naturally. There are no manual safeties—not even one that prevents firing when the magazine is removed. The gun’s multi-patented firing system blocks the striker-activated firing pin unless the trigger is pulled. External controls are limited to the trigger, slide stop and magazine release.

The CW45 is basically a lower-priced version of the larger TP and KP-series pistols produced earlier, and the compact PM45 pistols that came along a little later.

Economy measures include creating the magazine release, slide stop and firing pin block by metal-injection-molding. Only one magazine is provided (other Kahr .45s come with two). Also, the front sight isn’t drift-adjustable, but is pinned in place. A vertical white bar guides your eye to the rear sighting notch, while the front sight face features a large, white round dot. This is a highly effective combination for fast aiming at close quarters.

Trigger action is exceptional. The DAO trigger travels smoothly through a 5/8 inch-long arc, with barely noticeable stacking just before it breaks. The trigger on my test sample breaks cleanly under 5-1/2 pounds of pressure. This compares very favorably with the 12-plus-pound trigger pulls most revolvers require in double-action firing.

I expected serious recoil from this lightweight .45, but was surprised at how easy the gun was to control. The bore line lies close to my shooting hand, significantly reducing muzzle flip. While smaller than that found on most .45s, the stippled grip fit my hand very nicely. A firm, two-handed hold made the gun remarkably easy to shoot.

The operating manual contains a paragraph that reads: “ The KAHR Pistol must run through an initial break-in period before achieving fully reliable feeding and functioning. The pistol should not be considered fully reliable until after it has fired 200 rounds.” 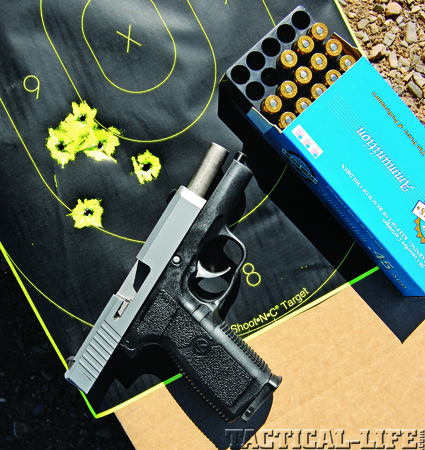 Fired from a sandbagged rest at 25 yards, the Kahr CS45 punched this 2.4-inch group with Black Hills ammo.

Ignoring this caveat, the little CW45 chewed through everything I put through it, feeding and firing without a single bobble. During the first firing session, the gun digested more than 250 rounds of mixed ammunition—that’s remarkable performance for any auto pistol right out of the box. I already own way too many guns, but I was beginning to have second thoughts about returning the CW 45 to Kahr when the consignment period ends.

I was impressed by the ergonomics of this little gun. It nestled nicely in my hand, and the narrow 1-inch slide had tapering cuts along the top and at the muzzle end. The smooth-faced trigger was situated so I could comfortably use the tip of my finger or the first joint to fire the gun.

The sights were easy to see, and could be quickly lined up on target. If you couldn’t see the square-shaped rear sight notch, you simply placed the white front dot over the white line on the rear sight, then tripped the trigger. The rear sight is drift-adjustable for windage, while the front blade is pinned permanently in place.

Reliable, accurate and easy to carry (concealed or openly on your belt), Kahr’s CW .45 offers bigbore firepower in a surprisingly small package. The 1911A1 pistols I own weigh nearly twice as much and have considerably greater bulk. I love my 1911s, but this Lilliputian .45 ACP is tempting me to reach for my checkbook. Believe me when I say I don’t test many guns that have that affect on me. 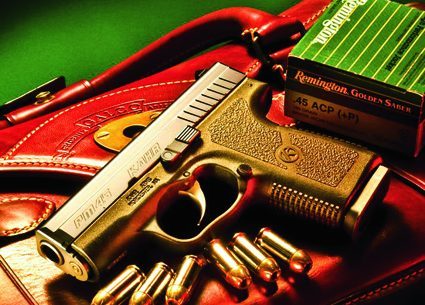 While the newer .380s are a delight to carry, most shooters are familiar with…