0
SHARES
234
VIEWS
Share on FacebookShare on Twitter
The Kahr P380 takes all the positive characteristics of its popular larger Kahr siblings and reduces them to a pint-sized .380 ACP package.

In the last 20 years or so, it’s difficult to think of a phrase in the firearms industry where the meaning has changed as dramatically as “pocket pistol” has—or a pistol that’s as good an example of that change as Kahr’s P380. Looking for all the world like a smaller version of their popular polymer-framed semiautomatics, Kahr’s long-awaited .380 maintains all the features that made the bigger pistols so well-received—features such as usable sights, manageable controls, and a locked breech.

Pocket Pistol Defined
In its simplest definition, a pocket pistol is just that—it’s a gun you can carry in your pocket. Since they represent a compromise between carrying a full-size pistol and carrying no gun at all, they’re usually small in both stature and caliber. .22 LR, .25 ACP, .32 ACP, and .380 ACP are all time-honored chamberings for hideout guns, with the bottlenecked .25 and .32 NAA rounds being petite, yet potent latecomers to the game. Since the 9mm Luger is generally regarded as the minimum power threshold for a serious belt gun, though, it’s fair to consider the .380 the top of the heap when it comes to pocket guns. And while larger caliber bullets are better performers—as with cars, there’s still no replacement for displacement—recent advances in bullet technology have made the .380 much more formidable than once it was. Still need convincing? Gunsite Academy, founded by the legendary Jeff Cooper and long known for their strict adherence to the .45 ACP, now actually offers a class devoted to pocket pistols.

The big reason to accept the reduction in fight-stopping power, of course, is that a smaller, lighter gun is more likely to be carried than a larger one—especially if it can be slipped into a pocket holster without the need to change your personal dress code. No doubt the P380, at 11½ ounces empty, is far lighter than something like a full-sized M1911 .45, which comes in at over two pounds unloaded. Yet the weight difference between a .380 and full-sized defensive pistol should come as no surprise; what’s surprising is how it compares to what we usually think of as a pocket gun.

One of the most venerable of the early pocket guns is Colt’s 1903, which was so well-received that it was carried by Gen. George S. Patton, and later adopted as the issue General Officer pistol for the U.S. Army. While you may not know it by name, it was enormously popular, and if you’ve ever seen any film noir movies (such as those with Humphrey Bogart) you’ve probably seen one. Chambered for the .32 or .380 auto cartridges, the scaled-down M1911-looking auto tips the scales at a hefty 1 pound, 10¾ ounces loaded—a couple ounces more than a snub-nosed Colt Detective Special .38 (1 lb, 8 oz), and nearly a quarter-pound more than James Bond’s beloved Walther PPK (1 lb, 7½ oz), perhaps the greatest pocket pistol of them all. What’s stunning though, is that the Kahr is a mere 13¾ ounces loaded—not only lighter than the .38, .380, and .32 but also lighter than Colt’s classic Vest Pocket .25, which weighs 14½ ounces, fully loaded. 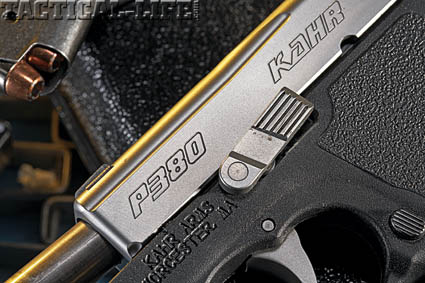 Light, Sleek and Accurate
The polymer frame makes it possible to now have a .380 auto that weighs less than yesterday’s .25’s. There are plenty of polymer frame pistols that share the Kahr’s light weight—the Kel-Tec .380 and Ruger LCP chief among them. The problem that many compact pistols often share, however, is that in order to be small and snag-free, they sacrifice usefulness in ways that would be unacceptable in larger handguns. Take the lack of sights, for example—fairly common on pocket guns.

There’s a lot of truth to what Louis Seecamp is quoted as saying when asked why his diminutive .32 didn’t have sights: “you just stick it in their face and pull the trigger.” This is especially true for those that carry a pocket pistol as a backup and having a larger pistol as their primary line of defense, but less valid for those who only carry the smaller gun and must rely on it exclusively. You can’t usually select the range at which you’ll be involved in a defensive shooting—if you could choose such things, the wise man would arrange to be elsewhere. While a compact pistol in .380 is, in a friend’s words, “not a hero gun,” you may be placed in a position where you have to fire a shot that requires the use of sights. Shooting without sights under stress is a very difficult skill to master, and most people woefully overestimate their ability to do it successfully. I’m not suggesting you have to be able to make 25-yard head shots with your pocket pistol, but you must be able to hit, and for that, sights—such as those on the P380—are usually required.

Dovetail-mounted front and rear, and consisting of a white bar in the rear and dot in the front, the Kahr sights are low-profile and snag-free, but still fairly easy to pick up. Shooting it at 7 yards, I was able to print groups under two inches, and was able to whack down steel plates quite handily.

Less crucial than the sights—but still handy—are the standard controls on the P380, which are the double-action-only trigger, a pushbutton mag release in the traditional location behind the trigger guard, and an external slidestop lever.

While you’re not likely to be doing a speed-reload with your .380 (if you are, you’re probably in real trouble), the slidestop is a valuable safety feature, because it lets you manually lock the slide back when you’re handling the weapon—something impossible on the PPK, for example, which has an empty-magazine slide lock but no external lever so that it can be manually engaged. I’m also a big believer in commonality of weapons systems, so for those who carry a larger (none of them are large, per se) Kahr, it’s an added benefit that all the switches are in the same places. 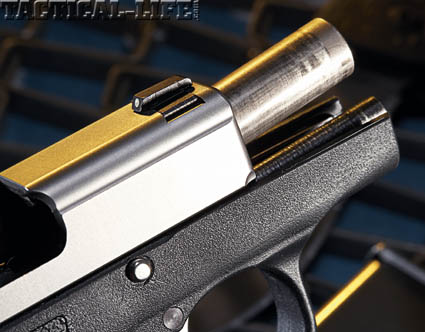 It’s also helpful that the P380 comes with a locked breech. While most of the classic pocket guns (again, the PPK, as well as the SIG P230/232, etc.) are blowbacks with fixed barrels, the P380 uses a recoil-operated Browning-style tilting barrel arrangement. The same system that’s used on the vast majority of larger-caliber pistols, the tilting barrel system keeps the barrel and slide locked together at the moment of firing; they recoil together for an instant, which lets chamber pressure drop before the slide separates from the barrel and continues its rearward travel ejecting the spent cartridge. While in blowback pistols the recoil of the pistol is only governed by the combined weight of the slide and power of the recoil spring, locked-breech systems dampen recoil, which can be surprisingly sharp in pocket guns.

By combining big-gun features and technology in a little-gun package, Kahr’s .380 is redefining what it takes to make a pocket pistol.