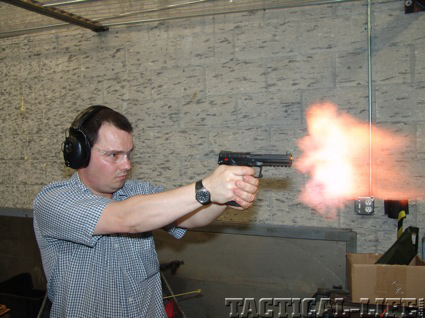 I visited Kel-Tec CNC Industries in Cocoa, Florida to shoot their newest pistol, the PMR-30 and to demo their full-auto tactical variant. The PMR-30 is a lightweight, full-size pistol chambered for the flat-shooting .22Magnum cartridge (.22WMR). The PMR-30 operates on a unique hybrid blowback/locked-breech system, allowing for the use of a wide variety of ammunition as it seamlessly adjusts between locked breach and blowback operation, depending on the pressure of the cartridge.

The PMR-30 uses a double stack magazine of a new design that holds 30 rounds and fits completely in the grip of the pistol. The single action trigger has an over travel stop and the thumb-activated ambidextrous safety lever is placed similar to Browning’s 1911, just like the release for the slide that locks back after the last shot. The light, crisp trigger pull, under-barrel MIL STD 1918 rail and fiber optic sights make the PMR-30 ideal for competitive shooting, personal defense and hunting small game.

We also were able to squeeze the trigger on the PMR-30 submachine gun that is a full-auto version of the PMR-30 pistol. Although not planned for production, the fast-firing prototype demonstrates the extreme reliability of the design and magazine. The PMR-30 subgun can empty the thirty-round magazine in less than a second and a half! 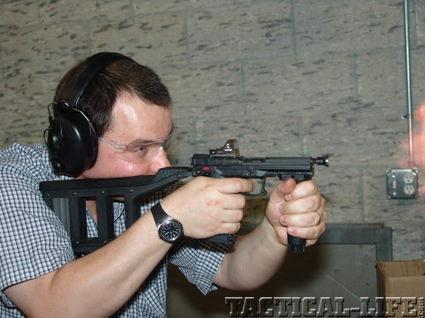 We shot the semi and full-auto versions of the PMR-30 at Kel-Tec’s indoor, fifty-yard range and immediately noted that the grip on the Kel-Tec PMR-30 was comfortable and had a natural point. The brilliant light-gathering fibers on the brilliantly colored front and rear sights made target acquisition easy, even indoors.

I released the slide, picked my point of impact and clicked off the very smooth safety with my right thumb. The trigger pull was smooth and the report was accompanied by an impressive muzzle flash, but no muzzle flip–leaving my sight picture undisturbed. I shot again and again, placing my CCI rounds dead on target with my first fifteen rounds and then emptied the magazine with rapid fire that shredded the target. I had forgotten how much fun the .22 WMR (.22 magnum) round really was! The accuracy was excellent, even with the full auto prototype built to test the PMR-30 magazines. The PMR-30 submachine gun emptied the full thirty-round magazine in less than a second and a half! With no recoil (it was like shooting a paintball gun), keeping the rounds on target was easy with its red-dot mini sight. 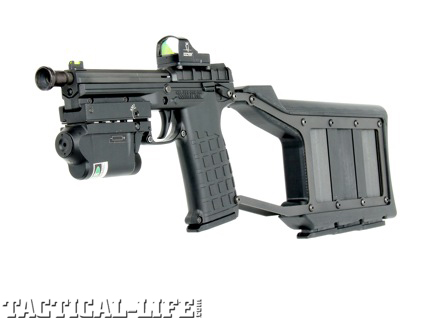 Do I want one? YES! I have not found a gun that was all fun with no vices like this one in a long time. With a MSRP of $415 they will be hard to keep on the shelves as its appeal as a inexpensive plinker, competition or defense weapon grows. Kel-Tec has brought fun back to the range.

For more information about Kel-Tec and their line of weapons, including the best-selling .380 P-3AT, the 9mm sub rifle 2000 and the .308 RFB bullpup rifle, visit Kel-tec-cnc.com.

NYPD Officers catch bad guys and get five pistols of different calibers off the street.

I visited Kel-Tec CNC Industries in Cocoa, Florida to shoot their newest pistol, the…