0
SHARES
82
VIEWS
Share on FacebookShare on Twitter
La Legion is one of the most decorated military units in history. Organized by Colonel Millan Astray during the early 20th century, following the model of the French Foreign Legion, it has shared and maybe surpassed the French heroism and “Espirit de Corps.” Both share the same bold and aggressive tactics and both have died in great numbers facing their enemies. The Spanish Foreign Legion nickname, Novios de la Muerte, the “Bridegrooms of Death,” and their motto, Viva la Muerte, “Long Live Death,” reflect their combat attitude.

Their creed reflects their ethics and morale: never avoid confrontation, never leave a comrade behind, and seeking death as the way of defeating any enemy, through superhuman aggressiveness. Its members, regardless of rank, are titled Caballero Legionario, or “Knight Legionnaire,” and since women were admitted, they were titled Dama Legionaria, or “Lady Legionnaire.” Legionnaires wear a special cap called Chapiri and have some traditions like tattoos, long beards and wearing their shirts open to expose their chests. These allowances, part of the Legionnaire mystique are being attacked for the sake of normalization, and may be part of the past soon. Times have changed and decades of politically correct governments and restricting ROEs have tamed that “old school” aggressiveness, but La Legion still mystifies death as a goal, as a way to conquer any enemy. 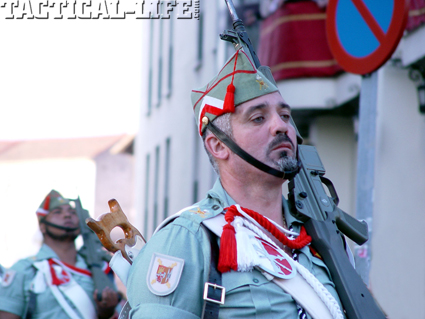 Sniping is typical Legionnaire job. One that requires a special set of skills: working alone, being aggressive but patient, technical but intuitive and working in harm’s way for the safety of your Bandera, or “battalion.” They eliminate threats and serve as scouts. The sniper assignment has become a very technical one. Sat-Comm, Para, Scuba, SF skills and extreme range ballistics have made advanced military snipers something that takes years to train.

Zeroed In
The Brigade Command is based in Almeria, Southern Spain. Two Legionnaire commanders, Brigadier General Varela and Col. Rodriguez, share the same tactical approach to soldiering, having commanded Special Forces under Spanish and NATO structure. As soon as they took command, they recognized the need for a more technically trained and accurate shooting soldier, who could fight in the 360 asymmetric environments with current Rules of Engagement safely, and with minimum collateral damage. The solution: a training program based around a shooting simulation building and some specialized outdoor ranges. A full-size urban street scenario, a full-size Afghan village, and a known and unknown distance tactical sniper range where built. To add to the training effort, they also use the advanced range system at CENAD Base in Albacete, equipped with state of the art SAAB LOMAH “miss-and-hit” electronic target systems. 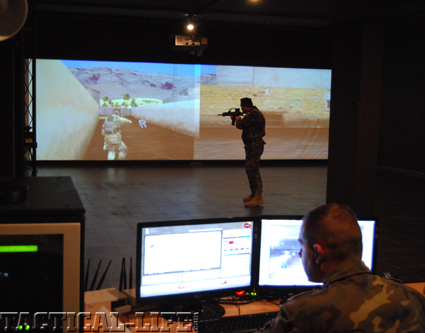 In the simulation building, you can train already capable Legionnaires with top marksmanship skills in a controlled environment. The original focus was in training snipers and designated marksmen equipped with scoped HK G36 rifles, but now the program also includes their TALOS artillery command and control system operators in the same simulation building to synchronize the efforts between different combat groups. 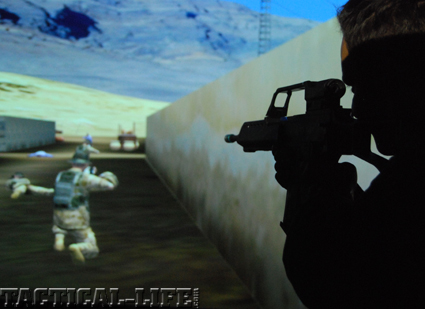 It is a crash course, with a yet-to-be-defined duration, on precision shooting and high-tech soldiering that is just starting to take place. Last December saw the opening for the training compound and I was honored to be the first to teach there with a two-day seminar on advanced .50 cal ballistics. 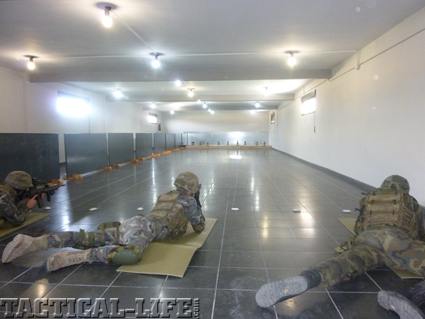 Precision Training
The program is likely to change as things are tested before the finished program can be established, but I wan tot give you an outline of what the main training phases will be.

La Legion soldiers will start in the main multimedia classroom, where they will be given the course outline, the focus of the program and the goals of the course. After a few days of sniping theory and a math and physics refresher course, they will start shooting. They will be tested and refreshed on the basics of positional shooting, sight picture and trigger control. Then they will start the actual shooting course with a Walther Dominator air rifle with a mil-dot scope installed. In a 10-meter indoor air rifle range, any flaw is corrected and they are checked for the basics of marksmanship and scope use. They train ranging on scale silhouettes and have to pass a group and minimum point standard. Once they demonstrate their basic skills, they advance to Phase II on the 25-meter air rifle range where they do the same exercises at a more challenging distance on reactive steel targets. The computer controlled NOPTEL laser simulator is used during this phase too, as a good way to introduce variables and press the marksmen into shooting smaller groups, being more consistent, fighting the wind and engaging moving targets. 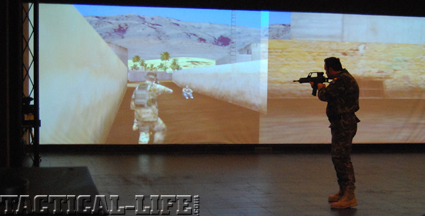 Once they are cleared on the marksmanship basics, they pass to the next level: a huge room with a state of the art INDRA computerized simulation system. The 40-foot projection screen can simulate urban scenarios, sniping situations—it returns fire via a laser system and can even simulate communications with command for extraction of WIAs or gas attacks. INDRA, a leader in fighter plane simulations, manufactures this awesome system in Spain. I have not seen a system so complete, flexible and large. With true HK G36s converted to laser rifles, you can make the soldiers, marksmen or even snipers face challenging scenarios and even no-win situations. The simulation room is so large that you can get a whole platoon section trained there, and make them fight and even “die” as a team.

After these simulations and real-fire phases, the soldiers are upgraded to a U.S. Marine marksman status. They are tested on the outdoor ranges, where they have to prove their performance with live fire up to 600 meters with their Leupold-scoped G36s. They have to prove their wits on the CQB-urban street scenario course, in the Afghan village and on known and unknown ranges with standardized rating exercises used by various NATO Armies. 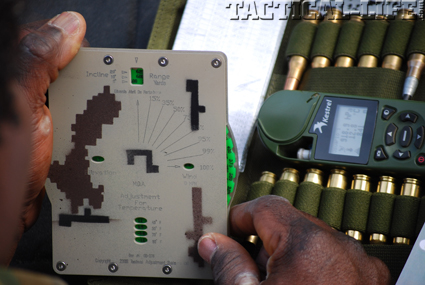 Once they have passed this phase, they will come to me. I help La Legion’s own superb NCO sniper instructors with advanced ballistics and sniper tactics. My job is to make their snipers deadly accurate, to their weapons’ limits and beyond. Military .50 caliber sniping has a more sensible envelope, but I never really understood the reasoning behind NATO limiting the .308 Win. (7.62x51mm NATO) range to 800 meters (880 yards). Most .308 rifles, even the short-barreled ones, fly supersonic well over the 900-yard line. That range is easily reachable with the 170- to 175-grain military ammo and even with the much less capable 168-grain HPBT “police” loads. Therefore, the 800-meter limitation is removed in the advanced La Legion sniper course and they learn to push the envelope of their Accuracy International AW and Barrett M95 .50 BMG rifles to predict the bullet’s point of impact (POI) in transonic flight. 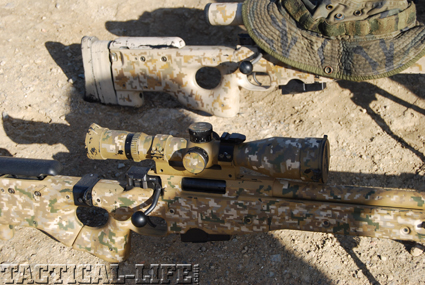 These shots are made possible by the use of advanced software in different presentations, be it paper tables, TAS rotary calculators or even PDA-based systems using tried and true Patagonia Ballistics LoadBase 3. That is my area of expertise. Being a “high mileage operator,” I have dedicated the last decade to the technical aspects of sniping, especially advanced ballistics. What affects long-range shots? What makes those factors so important at extreme ranges? How do you predict POI? This is what I teach the Legionnaires. 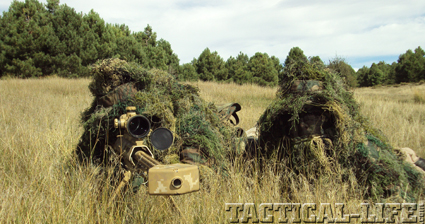 On this course they will be exposed to the new developments in software calculations and they will generate their own “customized” tables with chonographed speeds from their own personal ammo and rifle combinations, fed to the LoadBase 3 software, and using the BC and deceleration data from the Spanish Army radar tests at La Marañosa.

A Legionnaire sniper is taught and trained to make his own software-assisted “data book.” However, it’s important to note that such “data books,” or even the more elaborated tables, have something in common: the limited set of factors for which they can account. They cannot cope with all the ballistics variables since there is no way a sniper can consider all the environments that can be encountered during a real engagement. 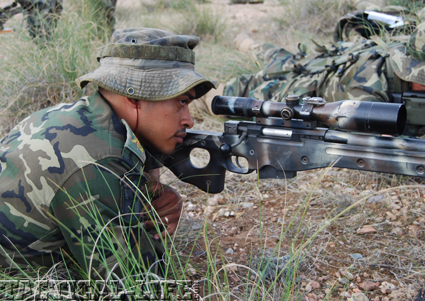 The critical factor to understand here is that the new record shots reported lately are made possible because after about 400 years of research, we have a much better understanding of exterior ballistics and, fortunately enough, the tools, hardware and software to make those very complex calculations a practical matter at the reach of every shooter. 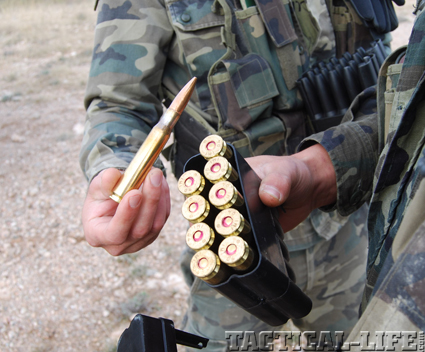 Breaking Records
“My” Legionnaire snipers have made reported successful combat shots at over 2,100 meters and we are shooting even further out now, thanks to the new software available. I have used ballistic software for 15 years and it never gave me an accurate enough extreme-range shot solution until recently. For the past three of four years, the new programs available have changed my mind and helped my shooting. After testing most of them, I settled in using Patagonia Ballistics LoadBase 3 and Barrett BORS for my long-range shooting. Under 1,000 yards there is no real need for them, but if you like to push the envelope, then they become not a gadget but a true critical need. Even a simple 5.11 HRT watch can be a big help when facing changing winds on the shooting position. And if you hate batteries, you can use software to build very accurate paper tables or use a ballistic wheel, such as the superb TAS system. This is what I teach in my extreme-range sniper courses to great success up to 2,000 meters and more. 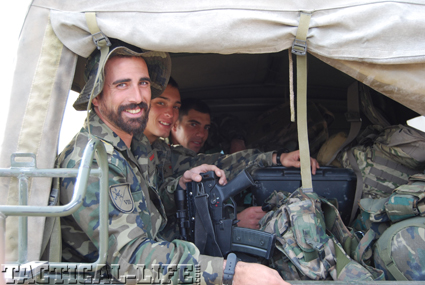 La Legion command has not yet settled the parameters for the qualification level of their Advanced Extreme Range Sniper Course, but performance expected will be as good or better than any sniper course, anywhere. This is the Legionnaire attitude, and now with the full support of La Legion Commanders, they have the training and the means to become the best snipers in the world.