The quest for comfortable duty footwear has gone on forever. When I started my career, the “stove pipe” Wellington boots were the order of the day. These slip-on not-quite cowboy boots gave nothing in the way of support and if your trousers were a fraction of an inch too short the cuff would hang up on the boot top to show it.

As an Army veteran, I had a few sets of boots from my time with Uncle Sam. Lace-up boots were okay since they do lend support to the ankle. During a firearms’ instructor school, a student was wearing the old “stove-tops” was in a rapid movement exercise. He slid a little. He stopped, the boot kept going and we heard the “snap.” He suffered a fracture. After that, these boots were proscribed on the range.

Since then, searching for the right boot for the job has been a quest. As someone assigned to work out of automobiles, it shouldn’t have been a big deal. It never failed, though, if I was forced to wear patent leather pumps (“corfam” or “clarino” low-quarters), that’s when we had to track someone across a field, walk a few miles of rail lines looking for lost children or an absconded fugitive, or climb up on a roof.

Danner Striker 45 II GTX Uniform
Danner has their new Striker 45 II GTX Uniform Boots. Plain toe (polishable) in black, these are featherweights. They feel like athletic shoes but have the durability of duty footwear. The TERRA Force construction is a series of internal and external shanks. Along with polyurethane cushioning, the support is firm. A mid-sole plate gives stability along with the cushioned support.

The wonder fabric GORE-TEX is used for lining inside the Striker. Breathable GORE-TEX keeps you cool while it keeps you dry. The upper is made of leather and fabric. The Striker 45 II GTX is a 4.5-inch boot, which is shorter than the typical 8-inch boot; it gives the structure and support of duty boots while feeling more like shoes. www.danner.com

Center of Mass In-Car Gun Safe
Have you ever taken a prisoner into the jail, put your sidearm(s) in the wall-mounted locker, gotten the prisoner processed and then simply driven away from the jail? It happens more often than you think. Conversely, have you ever gone on an airplane with the gun inside the checked baggage as you are outbound and then worn on your person for the return flight with the prisoner? You have to keep that gun secured then too.

How about being on HR218 status, commissioned law enforcement, while on a vacation trip out of state, and out to dinner with some friends in a location that sells alcohol? In many states, your status on HR218 puts you in a class that state citizens carrying on a permit are in and they have to leave the gun in the car when entering a liquor-selling restaurant.

Center of Mass makes in-car gun safes to keep your handgun secured while you can’t carry it. They meet the standard set by TSA (Transportation Security Administration) for the locked container in checked luggage. They are sold with a security cable to be looped around a fixed object.

They can be hidden under the car seat, cabled around the seat track. If you want a more permanent installation in the car, there are pre-drilled holes that can be used to secure the safe to the car.

Available in size medium (for guns from Chief’s Special to Glock 19, Springfield XD, and SIG SAUER P229) and large (for 4-inch revolvers and full-size 1911 pistols), if you buy multiple safes they can be keyed alike. I got mine keyed alike.

Even if you don’t take a vacation, wouldn’t use it in a patrol car and will not travel by air, you’ll be retired some day. They won’t get any cheaper. This is a “must have” to keep that sidearm away from prying eyes and hands. www.center-of-mass.com

Eagle Industries M4 Chest Rig
At the risk of sounding alarmist, things will not be getting better around this country in the near future. With terrorist threats, underage maniacs shooting up schools, hardened convicts dressing in armor with automatic rifles holding up banks and the likelihood of restrictive laws on possession of regular capacity magazines by citizens and gunshops, if you have a 5.56mm carbine you better have plenty of loaded magazines handy now.

How do you carry lots of magazines? For now, I’m looking at the Six Mag M4 Chest Rig from Eagle Industries/LE Division.

Worn over armor, the MOLLE (Modular Lightweight Load-carrying Equipment) style Chest Rig gives the user immediate reach to six magazines carried in three flap-covered pouches. More gear can be carried in MOLLE pouches that affix to the MOLLE webbing attachment points. Having put this rig on with only three magazines, I got the idea how it was to work. It’s a quick way to have replacement defensive ammunition close at hand.

SureFire E1B Backup
SureFire, makers of terrific flashlights as well as firearms suppressors, ear protection and cutlery, now offers what could be the single most practical light they’ve ever made. The E1B Backup fulfills a role that’s often talked about but seldom followed up on.

Actually, it wasn’t me; it was Clint Smith of Thunder Ranch fame. Or maybe he got it from someone else. It points out the need for redundancy in needed gear (like handguns).

The E1B is a 4-inch, sub-3-ounce flashlight that’s designed for the back-up role in uniform patrol and potentially a front line flashlight for the plainclothes, undercover or retired cop. The dual-output light-emitting diode is, like most LEDs, durable and a power miser. Its high output is 80 lumens, which is enough to wreck someone’s night vision. The low output (that will give about 37 hours of usable light on a single SureFire 123A lithium battery) gives off 5 lumens. That lets you read a driver’s license, take notes or look to see where you are about to step.

The flashlight is naturally made of hard-anodized aluminum. To minimize wear on clothing, there are no sharp edges or knurling. A pocket clip gives you a handy way to carry the E1B Backup. The clip is reversible, so the light can be carried bezel up or bezel down. www.surefire.com

What duty gear do you swear by?  Let us know by leaving a comment below! 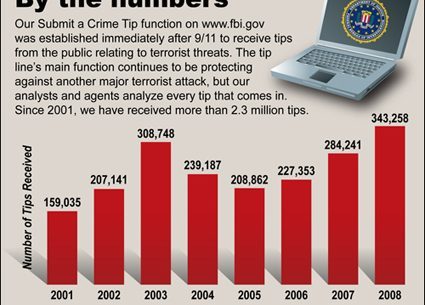 To Track A Threat: Inside The FBI Internet Tip Line

The quest for comfortable duty footwear has gone on forever. When I started my…