0
SHARES
73
VIEWS
Share on FacebookShare on Twitter
Named for the Norse god of mischief, the trick to this Loki is delivering rugged reliability with fantastic features at a viable price. shown here with a Trijicon Accupoint 1-4x.

A lesson that I learned a long time ago is that quality parts help make reliable weapons, but the care in fit, finish and hand craftsmanship really make the difference between a good rifle and a great rifle.

This is the second Loki Weapons Systems AR-style rifle I have tested over the past few months. One of the benefits of smaller semi-custom AR builders is their flexibility to anticipate the wants and needs of law enforcement, special operations military or the general shooting public, and Loki Weapon Systems, from Atoka, Oklahoma, is no exception. Shortly after Advanced Armament Corporation announced the release of the 300 AAC Blackout, Loki was one of the first manufacturers to bring a new 300 Blackout AR to the market. That rifle was Loki’s top-of-the-line, billet-receiver LWSF M4 Patrol Rifle. The introduction of their M4 MOE adds a forged-receiver AR-style rifle to their lineup at a price point that should please shooters.

“The typical purchaser of our M4 MOE rifles are guys who are buying their second AR-15-style rifle,” said Loki Weapon Systems. “They bought a cheap base model and started taking training classes for the carbine and realized it is time to upgrade to a more reliable rifle. They are looking for benefits and durability, for a little more. You get a lot of benefits with an M4 MOE, including accuracy, longer life and easier maintenance. Most police officers who buy Loki rifles will purchase their MOE-style rifle with a free-float modular handguard.”

The most prevalent aspect of Loki’s M4 MOE rifle is the Magpul Original Equipment (MOE) furniture and accessories. The model I tested included a Flat Dark Earth Magpul MOE collapsible stock, pistol grip, polymer handguard, MBUS rear flip sight and one PMag. Magpul’s MOE handguard is a mid-length design that accepts rail sections. You can also accessorize the Magpul MOE pistol grip to accept MIAD storage cores. This rifle’s other furniture color options include black or OD green. “We chose Magpul furniture over the standard mil-spec furniture due to the higher quality, fit, ergonomics and improved features,” Loki said. “The stock comes with a recoil pad and is much better fitting. The winter triggerguard is a nice feature over the standard mil-spec flat guard. The Magpul pistol grip offers a more ergonomic feel and better grip surface. The handguard has a more ergonomic shape better suited to today’s shooting stance.” 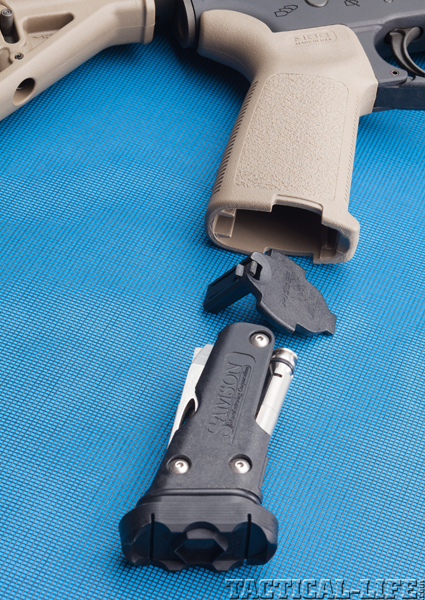 An A2 front sight post and mid-length gas system are standard, but the rifle I tested was upgraded with a Yankee Hill Machine (YHM) flip-up front sight. “The A2 is the standard sight, which can be upgraded to an YHM flip-up or a Picatinny rail gas block,” Loki added.

Starting at the muzzle, a 1/2-28 thread-per-inch A2 flash suppressor does its job, but that’s where the barrel starts to differ from a run-of-the-mill M4-contour style. The barrel is cut with a 1-in-8-inch twist. “We chose the 1-in-8-inch twist because it stabilizes the most common grain weight of bullets used in AR-15 platform, 55 to 75 grains,” they said.

The 16-inch barrel is nitride-treated for accuracy and longevity. “Salt bath nitriding is the process of nitrogen-bearing salts producing, through catalytic reaction, a tough, ductile compound layer with exceptional properties,” Loki said. “This compound layer has wear properties that are 200 percent to 1,000 percent greater than the original material, and greatly enhances resistance to corrosion and galling. The nitrided barrels maintain their intended accuracy while increasing the lifespan of the barrel greatly. Chrome-lined barrels have a similar lifespan as nitride-treated barrels, but they give up some accuracy with acid-etching and then adding a chrome layer that is not uniform.”

The Loki M4’s barrel is heavier than an M4 contour. “The barrel profile is designed to offer benefits over the typical M4 barrel,” they said. “The taper after the chamber is longer to provide more steel to help dissipate heat quicker while offering less whip. The profile is designed to promote less muzzle rise.”

Powering this gas impingement system is a gas block located at the mid-length position. When asked why Loki picked this setup, they said, “The mid-length gas system exerts less pressure on the bolt and gives it a longer lock-up time than a carbine gas system.” 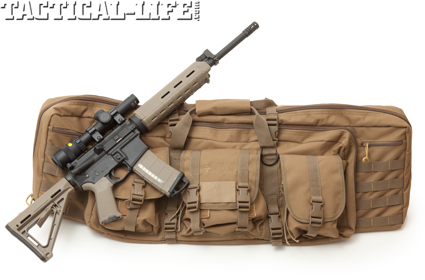 The Magpul MOE buttstock slides back and forth on a rear bench bag without activating the stock extension lever. 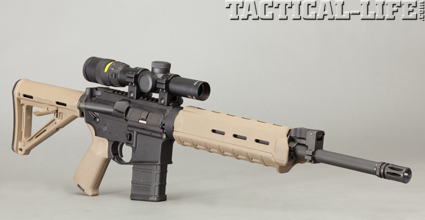 Extra care goes into building the receiver of a Loki M4 MOE. “Our gunsmiths handpick the receivers to offer a tighter fit for a solid start,” Loki said. The receiver locks up tight as a bank vault on the Loki M4 I tested. “They adjust the trigger to a crisp 5-pound break,” they said. “We hand-stone the trigger and adjust out some of the creep to produce a crisp trigger with a shorter take up. Stoning the trigger is just lightly removing the machining burrs left on the engagement surfaces. The creep is adjusted by a take-up screw that is Loctited in place.”

To take advantage of today’s high-quality optics, the Loki M4 upper receiver has an integral Mil-Std-1913 rail. A Magpul MBUS rear sight comes standard. “Once the rifle is built, it is inspected, cycled and test-fired,” they said, “and, all our parts are made in the U.S.A.”

With all of the workmanship, one might expect this rifle to perform well on target. “We have seen sub-MOA three-round groups at 100 yards,” they said. “We attribute the accuracy and reliability to quality machining and assembly by our gunsmiths.”

The range portion of the testing for the Loki MOE rifle was performed by shooting several five-shot groups at 100 yards from a Bulls Bag sitting on a steady bench. A minimum of four five-shot groups were fired with each load. The optic chosen to wring the best performance out of the MOE was a Trijicon AccuPoint 5-20x scope in a set of Trijicon rings fastened to the weapon’s Picatinny rail. A Shooting Chrony Beta chronograph gathered velocity data for 10-shot strings with each load. After shooting for groups, I fired another five 30-round magazines offhand with a 4x ACOG in place on steel targets ranging from 25 feet to 50 yards. Each load functioned flawlessly. 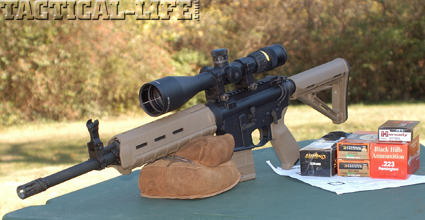 Summit Ammunition’s 77-grain match load averaged 2,585 feet per second (fps). Although the smallest group measured 1.29 inches, the average opened up significantly to 2.38 inches. Hornady’s 60-grain TAP load produced the smallest group of 0.71 inches. This load also ran significantly faster, too, at 2,869 fps. During the latter part of testing, when I had the 4x ACOG mounted and a magazine full of 60-grain TAP, I decided to shoot a couple of 100-yard groups. Even with the handicap of lower magnification, I was still able to put five shots into 2.10 and 2.05 inches.

Usually a top performer, this rifle didn’t like Federal Premium’s 69-grain Gold Medal Match loads as much as I predicted. The best group measured 1.19 inches, with the average opening up to 1.69 inches. Black Hills’ 55-grain spire points are economical plinking loads that commonly produce larger groups in 1-in-8-inch twist rate barrels. The 2.97-inch average for all groups was bested by its smallest group, which measured 2.89 inches. 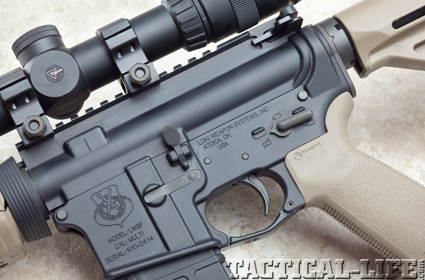 The MOE M4’s receivers are precisely fit by the Oklahoma manufaturer’s skilled gunsmiths.