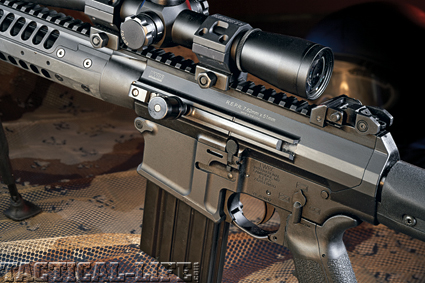 The R.E.P.R. features a FAL-style charging handle on the left side of the receiver.

Direct gas impingement (DGI) operating systems are not unique to the AR-15, but have been associated with the gun since it was adopted as the M16 by the U.S. military in the mid-twentieth century. Properly maintained and lubricated, a DGI AR-15 will run well for a very long time with few, if any malfunctions. Contrary to what many believe it is reliable, but it does require much more lubrication of the bolt carrier group than that required of a piston operated firearm.

A DGI gun bleeds hot combustion gasses from the barrel and vectors them via a gas tube into the receiver, where they impart energy to the bolt carrier group to cycle the gun. Those gasses deposit carbon and unburned powder residue into the operating parts where, unless a great deal of lubrication is present to keep the particles suspended, they cause friction which eventually binds the system. Heat deposited into the receiver also increases stress and reduces the service life of components. All of this requires more frequent cleaning and maintenance, and dusty environments like those encountered in the mid-east make it necessary to clean the gun even more frequently.

Gas Piston
Recognizing all this, many AR-15 manufacturers have recently introduced gas piston operated AR-15-style guns that have less intense maintenance and lubrication requirements than DGI guns. One company that has been producing piston guns for longer than many is LWRC International of Cambridge, Maryland. The company was founded with the intent of developing and perfecting a short stroke gas piston system for the AR-15 and began offering them in 2004.

LWRC offers several black guns, and each one is characterized by the company’s proprietary gas piston system. One unusual characteristic of the system is the segmented piston rod rather than the one-piece piston rod design that is so common on other guns. Darren Mellors, LWRC’s Executive Vice President, explained that one of the challenges in developing a reliable piston system was the difficulty in machining a long, thin, one-piece piston rod to proper tolerances and then correctly heat-treating it so that it would not eventually bend and cause a stoppage. To solve the problem, LWRC developed the segmented piston that consists of a piston cup that fits over the gas plug, an operating rod that contacts the bolt carrier and an intermediate rod that connects them. The design allows a bit of play which reduces the possibility that the rod will bend and stop the show which in a self defense or battle situation could be catastrophic.

According to Mellors, during tests the LWRC piston system ran without maintenance or cleaning for the entire service life of the test weapon with no failures and no build-up of carbon. He explained that the design of the piston cup and gas plug permits the cup to scrape itself clean and expel carbon into the atmosphere with each stroke.As the piston assembly moves to the rear about six-tenths of an inch, the operating rod strikes a thrust shoulder that is machined into the bolt carrier. It has been found that a bolt-on thrust shoulder that replaces the gas key is prone to failure, so LWRC decided to use a thrust shoulder integral to the bolt carrier. Another problem with piston guns is carrier tilt where the bolt carrier’s body tends to tilt downward at the rear because of the off-center thrust of the piston. This tilt tends to wear the lower receiver and buffer tube unevenly, which can eventually cause a failure. To remedy this, LWRC made the outside rear diameter of the carrier larger and machined skids at the bottom to more evenly distribute friction over a wider surface and reduce wear. The sides of the bolt carrier are also partially faceted instead of round in order to give any debris that might get into the receiver a place to accumulate instead of causing a stoppage. Lastly, the bolt carrier has a nickel-boron coating to increase lubricity and resist corrosion, and although the bolt appears similar to that of a standard AR-15, it is made of a material used in NASCAR transmissions and is much stronger. 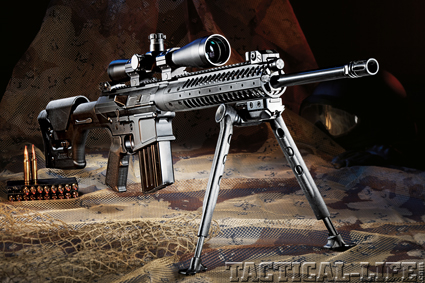 The R.E.P.R. is one of the most radically advanced AR variants from LWRC, incorporating not only piston operation but also the heavy-duty .308 Win. cartridge.

Another interesting feature of LWRC black guns is the barrel finish. Starting with 41V45 chrome-moly vanadium steel, which is very strong, LWRC hammer forges the barrel for very smooth, consistent rifling. Then, instead of applying hard chrome to the bore and chamber, LWRC treats the entire barrel, inside and out, with NiCorr which is a ferritic salt bath that actually hardens the surface of the steel to about .005-inch according to Mellors. The company says it resists corrosion better than phosphate or oxide finishes and because it is not plating, the bore is smoother and there is no concern about flaking, pits or nodules that can be a problem with chrome. 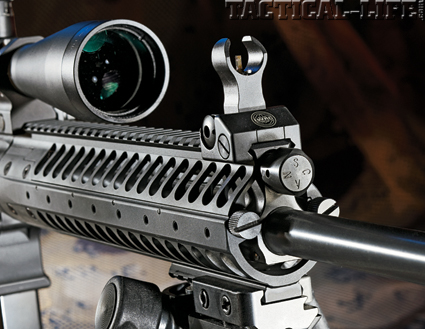 Offerings
LWRC lists a number of black guns on its website. The M6 is the company’s basic model similar to the M4 carbine and sports polymer handguards and an A-frame style front sight. With folding front and rear sights and a rail fore-end, the M6-G is similar to the common M4 except that it has a mid-length rail that offers more room to attach accessories. LWRC says the M6A1 is its SOPMOD M4 equivalent and comes with a free float rail fore-end and an A-frame style front sight that is preferred by some. The M6A1-S Patrolmen’s Carbine is available only to law enforcement officers and features the mid-length rail system and an A-frame style front sight. The mid-length free float rail fore-end is also found on the M6A2 along with a low profile gas block and folding front and rear back up irons sights (BUIS). The M6A2 D-DEA has the same features as the M6A2 plus an Advanced Combat Bolt and comes with a gun case, VTAC sling and three magazines. Equipped with folding BUIS and a mid-length rail fore-end, the M6A3 has an adjustable gas system and can be ordered with an optional Geissele two-stage trigger. LWRC calls the M6A4 its Infantry Automatic Rifle which is designed to fire from a closed bolt on semi-automatic and an open bolt on full auto. Then there is the PSD, a short barreled select fire gun designed for law enforcement or the military which is well suited for concealment or very close quarter engagements. Also very small is the M6A2-P Pistol which is semi-automatic, features the proprietary LWRC gas piston system and is available only in 5.56 NATO. Last is the R.E.P.R. which is an upsized version of the semi-auto carbine and is chambered in 7.62 NATO. With various barrel lengths available, it is suitable as a designated marksmen or sniper rifle.

LWRC International specializes in piston operated AR-style black guns and with its wide selection, has a model suited to just about any mission. Contact: LWRC International; 410-901-1348, lwrci.com 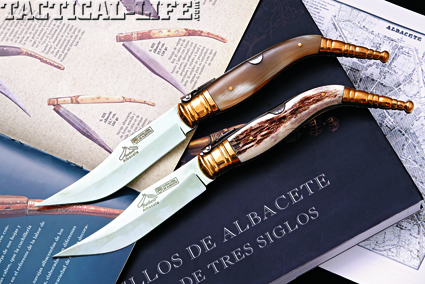 The R.E.P.R. features a FAL-style charging handle on the left side of the receiver.…