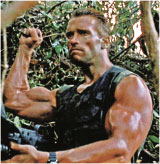 Okay, most Hollywood sci-fi blockbusters like Alien Vs. Predator, Independence Day and Cloverfield are designed from the ground up to be unabashed fantasies. Unfortunately, they usually include characters that are supposed to resemble real military personnel or today’s police officers. However ridiculous or dangerous, errors in their depiction are fair game to the predators who stalk Bad Hollywood.

Problems With Predators
“We’re a rescue team. Not assassins,” says cigar-chomping “Governator” Arnold Schwarzenegger to Carl Weathers (“Apollo Creed” in Rocky, Rocky II, Rocky III and Rocky IV), in the 1987 action/sci-fi classic Predator. Arnold’s character “Dutch” has been asked to take his covert ops team into a Central American country to recover a lost “Cabinet Minister,” and he’s explaining that his men are like “surgeons,” getting in and out as low-signature as possible—all cool tact-team jargon for the time.
When Arnold and his black ops team do fly into the operations area, they act like anything but professional operators. Their “plan” for a successful hostage rescue is to blow up the compound, run in while shooting everyone with triggers yanked back to magazine-draining full-auto fire. Now that may have been exhilarating to watch (and it must have been a hoot to film!) but if I were the nervous guy with the G-3 assigned to watch the prisoners, I think I might have pulled the trigger as soon as I heard the rest of the compound going up.
Predator was the first of a spate of Hollywood sci-fi epics made in the last two decades to foster the idea that well-armed groups of trained law enforcement or military men act like jerks and are helpless against aliens and dinosaurs. No matter how hard they train, how powerful their weapons are or how much experience they have in the field, they’ll fire their guns over the heads of the dinosaurs in Jurassic Park II and run away, screaming like school girls hitting the mall for the latest YuGiOh cards.

While we’re talking about things from Asia, Roland Emmerich, the man who ruined War of The Worlds when he remade it as Independence Day, did as equally a good hatchet job on my childhood favorite Godzilla with his 1998 “re-imagining” starring Matthew Broderick. There are so many scientific errors in the film it would take this entire magazine to go through them all, but the military and gun mistakes are just as astounding. Who can forget the thrilling scene of Godzilla chasing the military helicopter through the concrete canyons of Manhattan—his chomping jaws just inches behind the terrified chopper pilot—who never thinks to fly, say, up?

Helicopters can fly up! This guy flies at Godzilla’s mouth altitude the whole time! And I guess we’re supposed to cheer when Godzilla eats him. Later in the film a crack French tactical squad is seen preparing to face Godzilla with table after table of assault weapons and munitions—and then go into battle with HK MP-5s slung over their shoulders. Hello? Godzilla is several hundred feet tall—even the French should know that a 9mm ain’t gonna cut it. 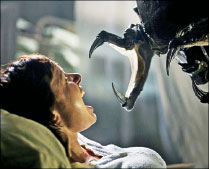 Requiem is a Lightweight
Aliens Vs Predator: Requiem is one of the latest cinematic disappointments to show blatant disregard for military accuracy. U.S. Army Capt. Logan Kerschner, who recently returned from two tours in the sandbox, found its depiction of its U.S. Army-veteran main character played by Reiko Ayesworth quite interesting:

“About 20 minutes into AVP:R is my favorite scene, the long-awaited return home from deployment. This scene reminded me of the chafing you get on mile eight of a marathon. It starts off bad and it only gets worse. ‘Fill in the Blank’ O’Brien (I say this because she has no rank anywhere on her uniform) gets out of a cab with her kit bag and rucksack. How she survived a year to 15 months with that little equipment is beyond me, since the basic load when deploying will easily fill two large duffle bags and a rucksack, and that’s just the basic load. The director must have been intentionally trying to piss me off when he put her in a Marine combat uniform instead of the U.S. Army combat uniform. If he wanted to get the uniform right, all he had to do is turn CNN on for 10 minutes and take notes. From top to bottom, she is a soup sandwich: no rank on the cover or blouse; popped collar like she’s back in high school wearing an Abercrombie & Fitch polo shirt; old desert camouflage nametapes.

“Her patches identify her as 101st Airborne, but she is wearing them incorrectly. The U.S. flag goes on the right shoulder along with the person’s combat patch (hers would be the 101st ABN). Instead they have it backwards and the Airborne patch that is supposed to be placed directly over the “Screaming Eagle” is placed on the upper flap, making her look ridiculous to anyone who is in, or has ever served in the Army. Since they decided to place the flag on her left shoulder, I only assume that is where her missing combat patch should be.

“Finally she re-unites with her husband and daughter at the doorstep of their home. Every re-deployment I have been on, they hold an enormous reunion ceremony with all the soldier’s friends and family. It is an Army standard. This husband must have been the only one not to attend. Immediately, the daughter rummages through the kit bag to find soldier O’Brien’s NODs (Night Optical Device). When I saw that I knew someone back at her unit is pissed right now trying to account for the missing NODs. This woman will be spending the rest of her short military career in the front leaning rest position. NODs are what we consider sensitive items. They are tracked just like a weapon, by serial number and inventoried constantly (trust me, I used to be the guy in my company who had to inventory all 215, by serial number, each month). After the deployment or training exercise is finished all sensitive items are locked up. She might as well have taken home an M4. 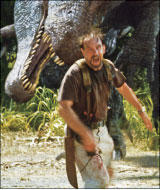 “Then she just lets her daughter fool around with the NODs like they were a Cracker Jack toy. It’s not like they are a piece of high-tech military equipment. I am not quite sure what this lady’s MOS was or what kind of training she received, but throughout this movie she is able to fire multiple types of weapons, drive a Stryker vehicle, and fly a helicopter. That’s the kind of Army I wish I were in, pick any soldier, and ask them to fly a helicopter, ‘No problem.’

“I am sure they thought, ‘We’ve got Aliens, Predators, an Alien/Predator love child, action and over-dramatization. What else do we need?’”

Capt. Kerschner has picked up on what is part of a larger problem. Most of the elites in the creative community see those in the military or police as stupid. This creates a schizophrenic situation. While in many of the films we see, the bad guys are renegade operators and ex-military, and so they must be presented as stupid so they can easily be defeated by the film’s hero—who is usually also a cop or an ex-SEAL (just)—“He was one of the good ones.” Like The Marine or Die Hard.

It also highlights their low opinion of the value of firearms. Think about how many of this type of film you’ve seen where the hero survives—a la Arnold in the first Predator—by “going back to nature” and forgetting his military training. The contractors in Jurassic Park III train with their Barrett .50s—but drop them and run when confronted by dinosaurs. Only kids and their unarmed parents can get off the island alive. See? Man cannot fight the animal—his weapons don’t make him superior, they’re crutches. To win he must become like the animal.

I invite the people who make these films to wander around Fallujah in their Birkenstocks or come with me, weaponless, to the polar bear mating fields of Churchill, Manitoba in the winter. I will be waiting, safe in the giant snow cat, while they “commune” with nature.

Good Hollywood Star: Tom Selleck should be no stranger to our readers, from his star stints as Magnum P.I. on TV in the 1980s to many a gun-owner’s favorite western, Quigley Down Under. On top of being an excellent actor, Tom has also been one of the most vocal pro-gun voices in America. A board member of the NRA, Selleck has tried to stress realism and responsibility where possible in his projects. In his newest small-screen incarnation, Selleck can be seen as Police Chief Jesse Stone in a series of CBS-TV movies of the week. It was in two of his latest projects that Selleck received praise and criticism from watchful TW reader D. Larson, a security specialist in Newmarket, VA.

Good—Stone Cold: This 2005 telefilm was the first adaptation of author Robert B. Parker’s (of Spenser fame) Jesse Stone novels. Tom Selleck plays Stone, the new Police Chief of Paradise, MA. I must disclose that Stone Cold was written by your faithful TW columnist, and can attest that Mr. Selleck was keen on the gun stuff being correct. He chose to have the character carry a 1911 as it is his favorite pistol. As our TW reader points out: “In the first one, Stone Cold Tom Selleck shoots a bad guy and after a couple of seconds during which he scans the scene you clearly see him remove his finger from the trigger and place it in the ready position back on the frame. Very admirable.”

Bad—Death in Paradise:
TW reader D. Larson’s admiration did not hold for Death in Paradise, the third of the Selleck “Jesse Stone” flicks: “I was watching Tom Selleck in Jesse Stone: Death in Paradise. He and his fellow officer known as “Suitcase” are on the range sighting in an AR-15 with an Aimpoint Comp M-3 on it. Tom tells Suit to “Give it two more clicks to the left” and Suit promptly adjusts the elevation and then shoots a perfect cloverleaf in the bull’s eye. The POV through the spotting scope shows absolutely perfectly round bullet holes that must have been at least .40-.45 cal. in diameter and I don’t think he was shooting a .458 SOCOM, since he was adjusting the scope with a .223/5.56×45 round!”

Keep your scopes set for gun gaffes and if we use your observations in an upcoming column of Bad Hollywood in TW, we will have someone pay you for them!

Okay, most Hollywood sci-fi blockbusters like Alien Vs. Predator, Independence Day and Cloverfield are…