by Tactical-Life.com
in Accessories, Exclusives, Gear
0

The Smith & Wesson Military & Police pistol has been on the market since 2005, and it’s making serious inroads. It’s fair to say that most of the agencies that I hear of switching pistols are going to the M&P. Available in a couple frame colors, four calibers, two trigger weights, two sizes with or without a magazine disconnect and internal lock, the M&P is a true contender.

And why not? It’s super reliable, a few M&Ps at the S&W Academy have over 10,000 rounds through them without cleaning or oiling and no malfunctions. Everyone who picks it up, and I mean everyone that I know, says that it’s the most comfortable pistol they’ve held. With three backstrap sizes to pick from, it fits hands that range from large to the smallest hands I’ve ever seen on an adult man. It has all of the inherent safety and reliability characteristics of all modern polymer-framed service quality pistols.

The striker is held in a partially cocked position by the slide’s forward motion, making it much safer than the alternative of holding it fully cocked. The slide is through hardened, not just surface hardened. The stainless steel fire-control chassis of the gun is set in a body of Zytel 8018, which incorporates a right-sized beavertail. The Melonite finish is tough enough for any environment. The M&P is lefty friendly with an ambidextrous slide lock and a left to right changeable magazine release.

S&W has obviously put a lot of thought and features into their flagship pistol, and it’s perfectly shootable right out of the box. Nonetheless, a pistol carried for protection of life is a very personal item, and everyone will have a little something that they either want to change or personalize. I’m no exception there, and so I got in touch with uber-gunsmith Karl Sokol in Vermont. Karl is a factory-certified M&P armorer, his work is world renowned, and he spends your money like it was his own. His guns are in the hands of US Special Forces personnel worldwide.

My M&P version is a full-size 9mm model without the internal lock and magazine disconnect. If I had to buy a gun with the internal lock, I’d have Karl remove it. It is an unauthorized user-access mechanism, not a safety, and I’d feel comfortable defending that action. Magazine disconnects are a religious preference and either way, Karl can add the feature to your M&P or remove it. I didn’t opt for one of Karl’s full-house makeovers, but simply asked him to modify a few things for me. Here’s what he did and what he didn’t do, and why.

Custom Details
Karl is well known for his stippling of Glock frames (he’s done mine), and he can texture additional areas of the M&P frame if you desire or make the existing texture more aggressive. Grip texture is an individual taste; while some people like it coarse as saw teeth, I prefer a middle-of-the-road approach. I find the factory texture satisfactory, and in fact had the opposite problem. For some reason the rear underside of the triggerguard is stippled and in a high round-count day, I discovered that it tore up my middle finger. Karl undercut and smoothed this area for me. 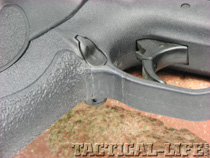 Trigger
The M&P comes with a reasonably acceptable trigger, but one known for overtravel. Karl did a complete trigger job on mine, polishing the parts of the trigger assembly, striker assembly and sear that touched each other. Of course, no springs were altered (that’s important with a gun you carry on the street). The M&P comes with a choice of two factory trigger weights: 6.5 and 10.5 pounds. I prefer the nominal 10.5-pound trigger because this is a duty/defense gun. After the trigger job, I had a pistol with a very controllable, extremely smooth trigger, the perfect small amount of creep (desirable on a street gun), and a crisp break. An M&P trigger job by a master like Karl also eliminates overtravel and provides a more positive reset.

Coating
The M&P doesn’t really need any additional protective coatings, but the ceramic-based Mountain-Tuff coating that Karl provides is the hardest non-plated finish available for guns. It will not only snaz up a pistol considerably, it will 1) add even more protection to the slide’s metal surface and 2) provide lubricity to it. I figured I would be a better shooter if I was going to choose a pink slide, but opted instead for “sniper gray,” which gives my M&P a classy subdued and refined two-tone look. Karl left the extractor black, a very nice touch. 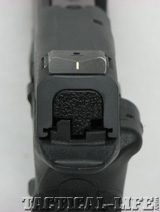 XS Sights
Changing the sights on the M&P is a job that can go south if you’re not careful, since the rear sight has a little firing pin plunger spring under it that will fly away and get lost if you don’t take precautions to capture it. Sight installation is best done by someone with the tools and experience to precisely fit them to the slide anyway. I asked Karl to install XS 24/7 Big Dot sights on my M&P, as he’s done on all of my carry pistols.

These are combat sights, and yes, they are a little bit coarser than post-and-notch sights. But I can hit pepper poppers at 75 yards with them consistently, so they are more than accurate enough for the kind of work that handguns were designed to do. XS sights are based on the old express sight, used on hunting rifles when large, dangerous game had to be stalked and taken at close distance. Kinda sounds like the predators we face, doesn’t it? Plus, with my current reading glasses dependence, I can actually see them without my glasses.

Crimson Trace
With but a few exceptions, there are  two kinds of shooters in the world of survival shooting as opposed to sport shooting or range shooting: those that have converted to lasers and those that haven’t given them a fair shake-out. Others and I have written quite a bit about the laser’s advantages, and I could fill this whole article with counters to the objections that some people come up with to them. Instead, I’ll just bottom line it for you: try to name a law enforcement or military unit that’s stopped using them by choice.

Crimson Trace makes the premier, combat-tested lasers that dominate the guns of the serious people in the field. The CTC Lasergrip for the M&P is contained in a replacement backstrap and like the factory backstraps it installs in seconds. Once you zero it, you’re done. It activates automatically when you acquire a shooting grip on the pistol. The only consideration with this unit is that it’s sized halfway between the medium and the large factory backstraps; if you need the small backstrap, you’ll have to compromise.

Shooting Impressions
In terms of accuracy, the M&P 9mm has been extensively tested by many others who report 2- to 3-inch groups with various ammunition at 25 yards. My original gun could do that too with my usual practice ammo of Black Hills FMJ or Winchester FM, both in 115 grains. But all of these results were from sandbag rests with post-and-notch sights, and closing one eye if necessary, which is only a theoretical indicator of the gun’s actual using accuracy.

To test the human shooting accuracy of the gun, which involves the relationship between accuracy and speed, I first like to use the Higginbotham Controllably Drill, which requires putting 5 shots into a folded 8.5×11-inch piece of paper at 5 yards in no more than 2 seconds from a low ready. This isn’t a hard drill, so if I can do it reasonably easily, I believe that the gun is accurate and controllable in real-life situations. I also like to be able to hit a 4×5-inch target at 15 yards with a controlled, but not slow, trigger press. Karl’s work helped me to perform these drills better than I could with the out-of-the-box gun because of the smooth trigger and the elimination of trigger overtravel, even with the XS sights. 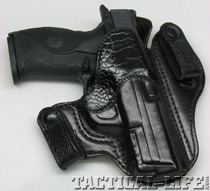 Holster Options
Any gun is only as good as your ability to access it. My favorite outside-the-pants holster is the K1 from FIST. This cant-adjustable Kydex holster makes the gun seem like its Velcro’ed to my body, and its speed and access is superior. With its unique belt loops, the K1 is another ergonomic masterpiece from Jim Murnak, the man behind the FIST suit. Almost everyone to whom I’ve recommended the K1 has reported that it’s their favorite, too.

As far as an inside-the-waistband (IWB) holster goes, Mark Garrity’s In-Cognito is the most comfortable and least bulky IWB I’ve worn. This holster has a Kydex-reinforced mouthband, and an extensive list of unique features: smooth kangaroo lining, a thin suede backing that covers the entire rear body of the holster to reduce shifting and prevent it from sticking to the wearer on a hot day; underneath the suede backing is a thin plastic membrane that protects the pistol from perspiration. Exquisite finishing touches can include the ostrich mouthband and loops. Mark is one of the best-kept secrets in the holster business.