0
SHARES
0
VIEWS
Share on FacebookShare on Twitter
ADCOR’S NEW 7.62 B.E.A.R.
Adcor, earning a strong reputation with several U.S. government contracts, is a leader in the AR-platform marketplace. Their B.E.A.R. (Brown Enhanced Automatic Rifle) piston gun is a new development in ARs. And, the B.E.A.R. GI is a 5.56mm NATO gas impingement with a handguard-mounted charging system and an easily cleaned removable gas tube. Just announced at the NRA show is the birth of the B.E.A.R.’s new big brother chambered in 7.62mm NATO. The first 7.62mm rifle should roll off the line later this summer. (adcorindustries.com; 888-612-3267)

ALEXANDER ARMS’ NEW CALIBERS
I had a nice chat with Bill Alexander at his booth and learned that Alexander Arms has added two more calibers to their AR lineup. They are now shipping guns chambered in 5.56mm NATO and 300 AAC Blackout. In addition, their .17 HMR rifles have evolved into highly dependable rimfire powerhouses. (alexanderarms.com) 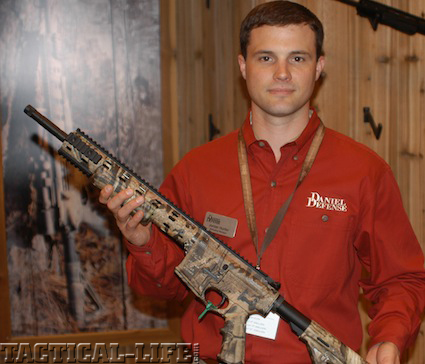 AMBUSH FIREARMS’ NEW CALIBERS
Daniel Defense has earned a stellar reputation as a provider of dependable AR-platform rifles for the military and law enforcement markets. Many of the guys at Daniel Defense are avid deer hunters and wanted to join the “modern sporting rifle” movement, but their line of rifles didn’t seem to quite mesh. To answer their dilemma, they introduced Ambush Firearms. The first rifles, in camo and black, were offered in deer-hunter-friendly 6.8 SPC and enjoyed quick acceptance in the market place after the 2011 SHOT Show. Answering the needs of serious predator hunters, Ambush Firearms introduced several new rifles in 5.56mm NATO. Bringing the number of rifles offered to 10, Ambush also introduced rifles chambered in 300 AAC Blackout. In addition to black rifles, Ambush offers models in Mossy Oak Breakup Infinity and Realtree AP, and even a 5.56mm Mossy Oak Infinity Pink. (ambushfirearms.com; 855-262-8742) 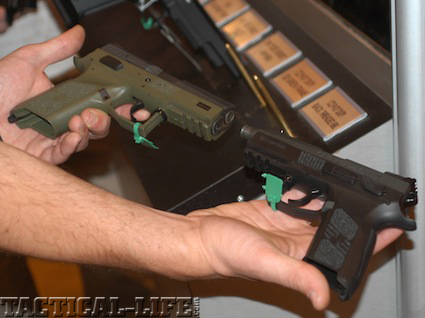 CZ USA P-07 DUTY
New for 2012 is the suppressor-ready P-07 Duty. The 1/2-28 threaded muzzle accepts most suppressors made for the U.S. market. The sights on this variant of the CZ 75 are higher than standard sights. These will clear 1-inch-diameter suppressors. This polymer-framed 9mm pistol is ready for duty. (cz-usa.com; 800-955-4486) 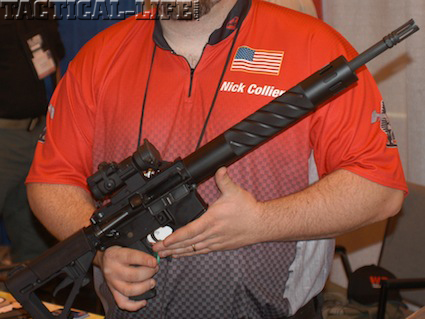 DOUBLESTAR 300 BLK AR
J&T Distributing and their sister company, Doublestar, just released their AR version of the highly popular 300 AAC Blackout. This rifle sports a 16-inch 5/8-24-threaded barrel ready to mount a suppressor. Another new AR from Doublestar is their 5.5-pound “Bug-Out” rifle. Chambered in 5.56mm NATO, this rifle gets its feather weight from features like a short, fixed-length buttstock and a polymer handguard. (star15.com; 888-736-7725) 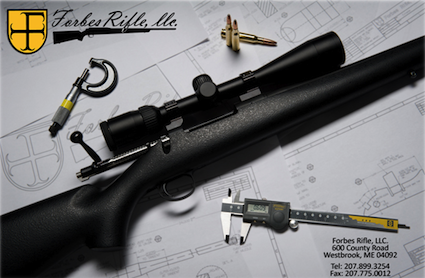 FORBES RIFLE BOLT ACTION
Westbrook, Maine’s Forbes Rifles is now offering a line of bolt-action rifles. Their Model 24B is available in five calibers. One of the most impressive features of this rifle is its weight, which tips the scales at 5.5 pounds. Fitting the niche between standard factory-built rifles and custom guns, the Model 24B splits the difference with its $1,394 retail price. (forbesriflellc.com; 207-899-3254) 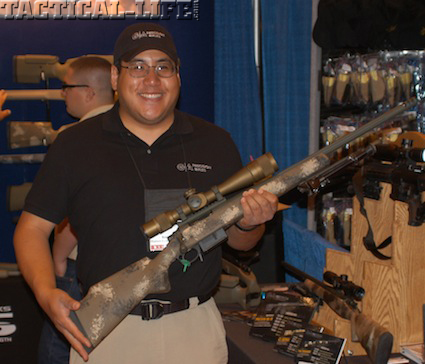 GA PRECISION’S THUNDER RANCH RIFLE
GA Precision went to accuracy guru and Thunder Ranch instructor Clint Smith for some tips on his ideal “teaching” rifle. The end result is a .308 bolt action that’s tricked out for long-range performance. The rifle is built on GA Precision’s Templar short action. The barrel is a Bartlein, 1-in-11.25-inch-twist 5R stainless steel with a special Thunder Ranch contour. The gun’s stock is a Manners MCS T, with molded-in Field Grade GAP camo. The triggerguard is a Manners Mini Chassis, and the metal surfaces are mil-spec OD Cerakote.

The Templar action features a solid 4320 CM one-piece bolt that is turned from a solid piece of billet. The bolt’s M16 extractor is one of the most solid available, according to company representative Ken Lin. The gun’s trigger is tuned to a crisp 2.5 pounds, and is guaranteed to produce 0.38-MOA groups with match-grade ammo. (gaprecision.net; 816-221-1844) 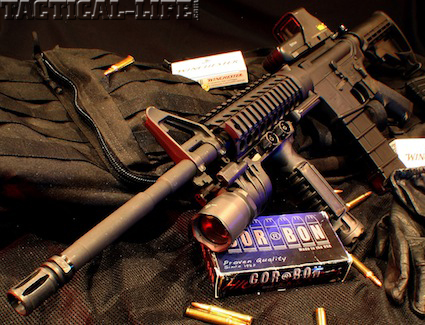 HYDRA BELT-FED AR
One of the most interesting AR-platform weapons at the NRA convention was MGI’s belt-fed Hydra. This belt-fed Hydra can be retrofitted to use their existing interchangeable magazine wells and includes the QCB upper receiver with MGI’s specially patented locking system. The belt-fed Hydra comes ready to shoot out of the box, including 100 specially modified links along with an M249 SAW-style box. Experience the fun of shooting a belt of ammunition on an AR-15-style platform, if you’re ready to cough up $4,499. (mgi-military.com; 207-817-3280)

RUGER’S NEW PRODUCTS
Ruger’s ever-popular 10/22 rifle now comes in a takedown model, just released at NRA’s national convention. The stainless rifle has a takedown collar that separates the action from the barrel for storage in tight spaces. Another new model from Ruger is their SR22, which is a polymer-framed .22 LR pistol. This compact pistol features an integral accessory rail on the bottom of the frame. Completing Ruger’s trifecta of new products is their 22/45 Lite. This semi-auto pistol has a lightweight barrel shroud, and its muzzle is threaded for a suppressor. (ruger.com) 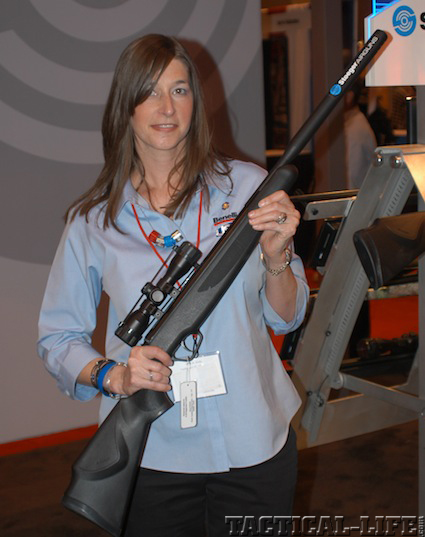 STOEGER’S NEW GUNS
The Stoeger M2000 semi-auto 12 gauge has been on the market for almost a decade, so now parent company Benelli USA decided it’s time to evolve this shotgun into the new M3000. This inertia-driven shotgun will handle 3-inch magnum ammo without adjustment, and is offered at a low MSRP of $599 for their Realtree-dressed version. (stoegerindustries.com; 800-264-4962)
Stoeger’s new lineup of airguns added another model at the NRA show. The new X20 Suppressor features European styling and is one of the quietest airguns in its class. (stoegerairguns.com)

UBERTI SILVERBOY
When I stopped by the Uberti booth, I was surprised to meet Troy Landry, star of the new Discovery Channel television series Swamp People. One of the rifles that caught Troy’s attention was Uberti’s new .22 LR lever action, the Silverboy. Similar in profile to the legendary Yellowboy, the Silverboy features a chrome action and barrel. Although it might be a tad fancy for use as a gator dispatcher in the Louisiana swamps, the Silverboy might be just the rifle to add to your collection. (uberti.com; 615-595-2255)

USELTON ARMS A4 BLACK WIDOW
Rick Uselton built a reputation on his custom 1911 pistols, and recently introduced a new 1911 frame that uses a new technology called “exploded fusion.” The net result is a pistol frame that welds together an alloy frame with stainless steel frame rails for a super lightweight finished pistol that weighs a third less than a comparable all-steel 1911. Adding to the firearms using Uselton’s patented exploded fusion is their A4 Black Widow AR-platform rifle chambered in 5.56mm NATO. (useltonarms.com; 615-595-2255) 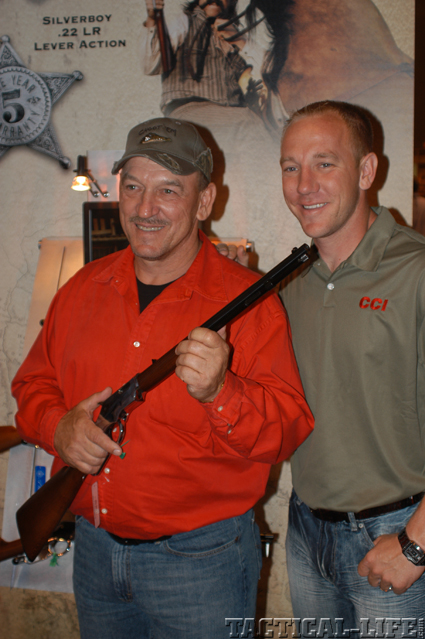