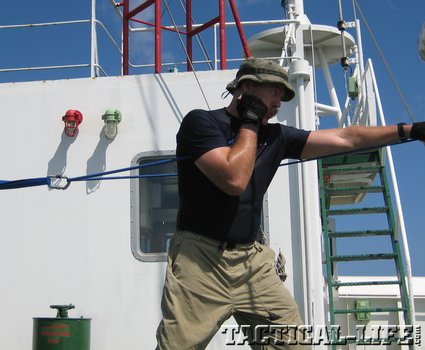 Business travel can push a person out of his or her “comfort zone” and temporarily trash a carefully established, healthy routine—which, for many of us, includes exercise workouts. Hitting the road for a paycheck, however, does not mean your painstakingly achieved fitness has to decline significantly—and, maybe not at all. I speak from experience.

In November 2012 I returned home from what would be my ultimate business trip: a two-month, maritime-security job on the Indian Ocean. I came back in perhaps slightly better shape than when I left, too. I had swapped my normal, twice- or thrice-weekly workout routine—kettle bells, calisthenics, and Nordic Track at home; dumbbells and weight machines at a local gym—for an improvised, shipboard routine. I used minimal personal gear and a variety of metal fixtures on the lifeboat deck and navigation deck of the Asian-flagged cargo ship I helped guard against Somali pirates.

Those heavily armed thugs never threatened our vessel, by the way; they were somewhere else in the “High Risk Area.” (The only shooting on our ship was the test-fire and sighting of our contracted security team’s battle rifles.)

My workouts occurred while our client’s ship was at anchor in a secure harbor. I had to improvise; the only exercise gear I had had room for in my duffel bag were two exercise bands, the rubber-tube variety—one light-to-medium and one medium-heavy—plus a 3-foot loop of tubular-nylon webbing and a carabiner. A pair of half-finger workout gloves—which doubled as shooter’s gloves while I was on guard duty on the ocean—protected my hands when I did knuckle pushups on the sun-heated deck.

So you think your road-warrior motel’s musty “exercise room” is a challenge? Try pumping out inclined pushups above the poop deck. With some reality-based planning, you can stay fit even during extended business travel. I used different exercises on different days to make life aboard an ocean-going cargo ship a memorable experience.

Here were my “Dirty Dozen” exercises and my no-frills gear… 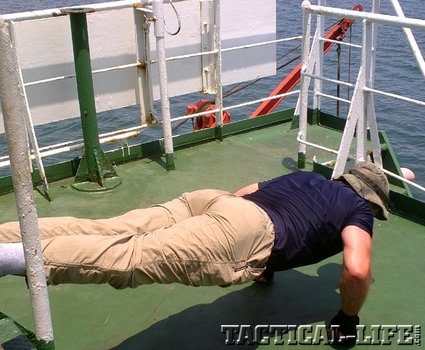 Incline push-ups on the knuckles: My packing list for east Africa and the Indian Ocean was so heavy and bulky that I reluctantly had to leave behind my “Perfect Pushup” set (the swiveling exercise handles created by an ex-SEAL). I made do, though, with an exercise I did decades ago as a teen-ager in karate classes: the knuckle pushup. The elevated feet, however, were a recent modification. My chest and arms felt the familiar burn. It didn’t take that many repetitions, either. Good form is very important; the body needs to be straight. 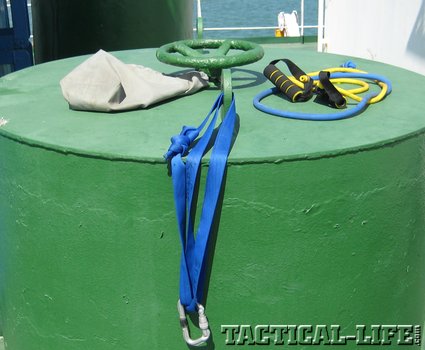 Use-anywhere resistance rig: Lightweight, simple, and relatively inexpensive—I used this rig in my outside workouts and even in my tiny cabin during transits, when the ship was in “pirate waters” and our armed security team was on 24/7 duty. The loop of tubular-nylon webbing provided a base wrap on a solid object; the carabiner allowed easy installation of the heavy- or medium-thickness exercise band and kept abrasion on the rubber tubes to a minimum.

Boxing-punch drill with resistance: With knees bent and feet in a realistic, shoulder-width stance—nothing long and deep—the exercise comprises a set of jabs with the front hand and a set of straight-punches with the back hand. Then, a combination set: jab-jab-straight, jab-jab-straight, etc. Breathing: short exhalations with each punch. At muscle fatigue: stop, take a quick breather, then change stance and resume with the other foot/hand forward. Do not sacrifice technique for speed or number of reps: Keep the wrists straight and fists tight. Keep elbows in close to the body—no “chicken-winging”—as if to protect the ribs against a kick. Lower the head slightly, using the chin as if to protect the throat from a punch. 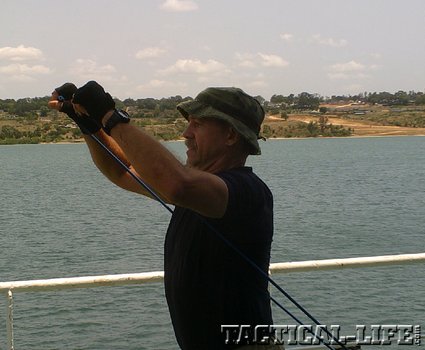 Standing, inclined chest press: In a good stance with torso straight, slowly raise both arms to above eye level; hold briefly, the return. After one set, switch stance and put the other foot forward. Arms, chest, and shoulders benefit—but, so does the “core”: the abdominal and lower- back muscles also have to be on board for the big win or the technique becomes sloppy and the exercise suffers. 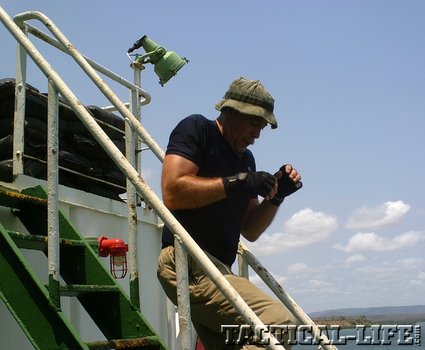 Jogging sets of stairs: Life aboard an ocean-going, working ship (as opposed to a luxurious cruise liner) means having to use steep, metal stairs many times a day: some are inside, some are outside. If the main deck of the big ship is off limits to unauthorized activity—like jogging—then why not use some of the outside stairs toward the stern for some roadwork? There was a set of stairs—10 steps each—on each side of the ship’s smokestack. One lap required about 45 steps in my “Airborne shuffle” pace: up one set of stairs, across a deck, down the other set of stairs, across the deck, and repeat. Just for grins, sometimes I’d pause to knock out 1 or 2 body-dips at the top of the handrails of my “up” steps. During a 20-minute stair jog, that translated into about 45 upper-body reps.

Body dips: Very useful for chest, arms, and shoulders either as a stand-alone exercise or as part of a stair jog.

Situps: Very straight-forward: use the lower part of the handrail to hook the feet, then perform slow and deliberate sit-ups. Nothing fancy. 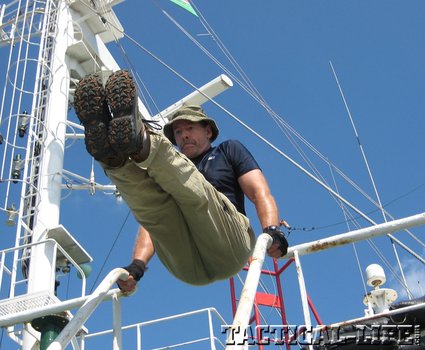 Leg raises for lower abs: This exercise was kind of fancy; almost gymnastic looking. Using the arms to elevate yourself to a stable, vertical position, bring the legs up to—or past—the 90-degree position. The slower the movement, the better the burn. (The arms and shoulder get an additional workout, too.) Try doing them with combat boots on, too.

Resistance work on lower back: Not everybody works their lower-back muscles, but that area of the physique is important, too—especially for somebody who has to pick up and carry any type of load. This exercise is a “reverse sit-up,” with the exercise band providing resistance that works the lower back. This was the only exercise for which I looped the rubber tube around ship’s steel, rather than through the smooth aluminum of the carabiner. (Abrasion prematurely ages those resistance bands.) 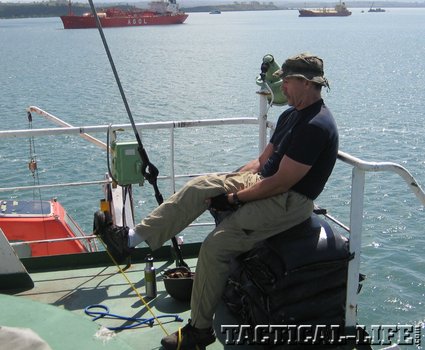 Leg extension: Full disclosure: I have an osteoarthritic knee—the lingering result of injury in my unsuccessful 1986 try-out for the US Army’s Delta Force—and I typically wear a brace nowadays. Braces support and protect a joint, but they can atrophy muscles. So, I use the medium exercise band to work the leg muscles around my bad knee. One end of the resistance band hooks around my foot; the other end is shortened and pinned to the deck with my other foot. The motion is a slow arc upward; then, even slower back down. (I usually didn’t do this exercise on days in which I jogged the stairs, as I didn’t want to wear out my weaker knee.) 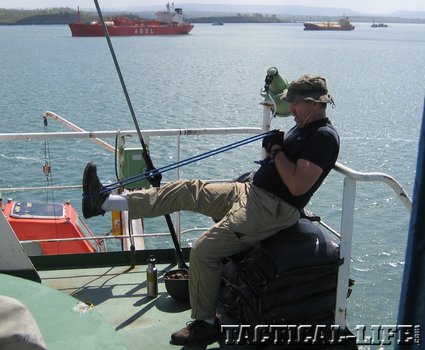 Leg press: Sitting on a handy formation of sandbags—a fighting position intended to stop pirates’ AK-rifle or PKM machine-gun bullets—I use a deliberate, stomp-kick motion in this press. The leg goes out and returns slowly. The heavy band provides constant resistance. (Caution: If the band slips off your foot during extension, it will slingshot back into your chest or face. Anybody observing your workout likely will find this amusing, even if you do not.) 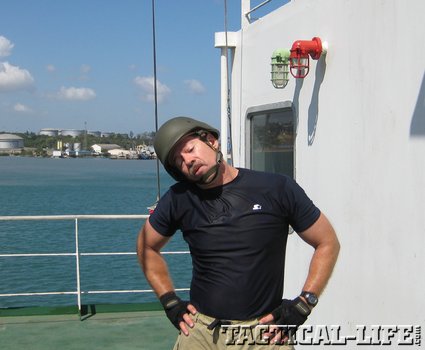 Neck exercise with resistance: The neck muscles arguably are the most neglected on the body. They are not easy to develop, but that doesn’t mean to ignore them (assuming you do not have an injury or chiropractic condition that limits motion). Because the Somali pirates never came around our ship, I seldom wore my German-made Kevlar helmet while on duty. However, I wore the 2.9-pound brain bucket quite a bit on the path to a thicker neck. There are two distinct motions in each set. In the first set, the chin slowly drops to the chest; then, reversing, the head goes slowly back as far as possible and you look up at the sky; repeat for as many reps as comfortably possible. In the next set, the right ear goes to the right shoulder and then left ear goes to the left shoulder, slowly and for the same number of reps as the first set. This exercise mimics the motions of a Nautilus “4-way neck machine” I used to work out on.

Australian pull-up: It’s not a “real” pull-up—which means hanging straight up and down, fully hoisting your body weight—so this Aussie must be easy, right? At first, maybe; but after 20 or so, not so easy. Here, I’m using the safety cage around the ladder on the ship’s smokestack. My feet are on one of the ladder’s steps, and my body is as plank-straight as I can keep it.

Free-lance writer and ex-paratrooper Martin Kufus’s first contribution to Tactical-Life.com was “Ransoms or no ransoms? UK Parliament debates a core issue of Somali piracy,” which was posted on June 28, 2012. The photographs used in this article were taken by his maritime-security team leader, whose radio call-sign is “El Jefe” (The Boss, in Spanish). 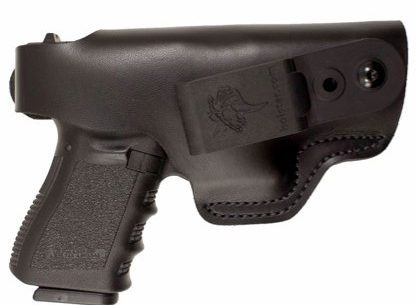 The DeSantis Dual Carry II can be used as IWB and OWB concealed carry...