While at home one day, I got a frantic phone call from a friend.  While it’s not an official association, we’re members of what one could call the “Revolver Rescue Group.” He said to make a quick trip to a local pawn shop and he’d meet me there.

I arrived to find a rather large, blue S&W fixed sight revolver. The tag on the gun said “M&P,” meaning “Military and Police” and a former moniker of the Model 10/64/13/65 type revolvers. This gun was clearly too big to be a K-frame. A quick exam proved it to be a 38/44 Heavy Duty.

The finish was in decent shape, a little wear around the muzzle and some browning of the backstrap. The case hardening on the trigger and hammer were hardly museum grade, but the piece looked nearly serviceable. Only one thing marred this otherwise excellent deal: a large, unsightly bulge in the 6 ½” barrel just ahead of the ejector rod shroud. And large it was too: you could see this bulge from across a room! I wasn’t really interested even at the bargain price. This would require surgery.

My friend prevailed upon me. A barrel should be obtainable. I told the proprietor that the price was too high. We haggled. I explained that the piece was dangerous to shoot. If expanding gas from the fired cartridge got ahead of the bullet in the weakened area of the barrel the result would be reminiscent of an exploding cigar but with personal injury more likely.

A deal was struck. I left with my prize wondering what could be done with it.

S&W Hand Ejectors
The gun has a 1953-era serial number. It’s not model numbered meaning it was known as the “Heavy Duty” instead of “Model 20.” According to sources, the 38/44 HD, not to be confused with the Outdoorsman (the same gun with adjustable sights), was made until 1966. Magna Stocks grace the butt of the damaged 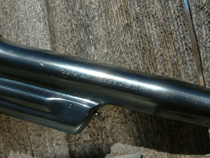 goods. They are dark and chipped at the butt, indicating that they were carried in a holster.

This type of revolver was conceptualized in the early to mid-part of the 20th Century. Gangsters of the era relied on the heavy bodies of their automobiles for cover. When they were away from the cars, heavy and inflexible body armor was worn. Conventional .38 Special ammunition wasn’t so special against those obstructions. Police sought to have guns and ammo that could drill through the car bodies and the not-so-concealable armor of the period.

The .38 Super cartridge was developed to give penetration, but its use was confined, so far as I know, to the 1911 semi-auto. Most cops were revolver packers. In about 1929, S&W stepped up to the plate by getting .38 Special ammo hot-rodded. The newly invigorated .38 was the .38 HV (High Velocity), also known as the .38/44. The Winchester 38 Special +P lead hollow point of today (catalog X38SPD, my favorite .38 Special defense load) is similar to the 38/44 ammo of the period. Pointed lead bullets with a covering jacket (Winchester Metal Point) were also loaded to higher velocity in the .38/44. S&W made a .38 Special revolver on the .44 frame, hence the .38/44 moniker. In fixed sight trim, this was the Heavy Duty. After 1956, the HD was called the Model 20. Gussied up with adjustable sights, the big .38 was called the Outdoorsman, later called the Model 22.

They were soon eclipsed by the advent of the .357 Magnum.

Many four-inch Heavy Duty revolvers were made and carried by law enforcement. The Kansas Highway Patrol, for example, carried such guns until they got S&W Model 66s in 1977-78.

I had a nice gun on my hands, if it could just be restored.

Revolver Rescue
Mike Rafferty has forgotten more about guns than I’ll ever know. He examined the .38/44 HD and made his pronouncements. Perhaps the barrel could be cut – he was uncertain how far back it would have to be cut as it couldn’t go into the ejector rod shroud. Another option was to scare up a barrel. Finally, we could find someone to do an over-bore conversion on the piece, say to .44 Special.

Mike nosed around. If anyone in the world of guns has something, odds are that Mike will find it – if he doesn’t already have it. He found that Gun Parts Corporation (AKA/ Numrich Arms) had some ‘in-the-white’ factory new barrels. Some were for the Outdoorsman, but they had Heavy Duty barrels with the integral front sight. I quickly ordered one. While we were waiting, I contacted Gene DeSantis and explained my plight. He told me that he would check to see what he had that might fit the soon-to-be refurbished gun.

Presently, the barrel arrived. It was truly unfinished. The steel had machine marks. The barrel was “white,” the complete absence of any finish work at all. There was no locking bolt, locking bolt spring nor locking bolt pin in the new barrel.

The thing left was to see who could put the whole mess back into shape.

During a telephone call to Jim Rae, the revolver wizard of the Performance Center, I expressed my disappointment at them not working on older guns. I understood why, what with the value of older pieces and the likely unavailability of parts. “What do you have,” he asked. I explained the situation. “Send it,” he said.

Flabbergasted, but unwilling to ask twice, the gun, barrel and all went off to Springfield Massachusetts. Now all I could do was wait. 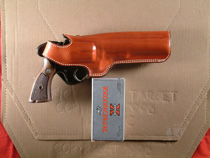 The Package
The finely finished DeSantis Dual Angle Hunter holster arrived first. It’s a good looking holster designed to carry the weight of a significant handgun. Without a gun to fit it, there was nothing I could do. Time passed and I got edgy.

Mike told me to expect a wait: the Performance Center has plenty to do without the work I sent them. He was right. There are several models of Performance Center guns manufactured each year and they do custom work to boot. I’d just settled down when the Federal Express van showed up. The blue box I’d sent was back. The gun in it was brand new.

The new barrel was fitted, polished and the entire gun given the factory blue finish. Unlike a reblue you get from the corner smithy, this was done at the factory by their finish process. While I’ve gotten good results from some after market finishes, some aren’t so good. This gun cried out to be restored and restored it is.

Along with the bulged barrel, there was a trigger in the package. Pulling up my digital “before” photos, I found that the extra trigger was one that had been in the gun. To this day, I haven’t bothered Jim Rae to find out why the trigger was replaced. It doesn’t matter, though I appreciate it.

The entire package was superb. The chipped, age-darkened walnut Magna stocks were still on the gun. It was eerie, as if I’d gone back to 1953 and bought the gun new from a dealer who took the new lumber off and replaced it with something “seasoned.”

It locks up tight like a vault. The cylinder gap is close but not close enough to bind. A look down the tube shows a well cut forcing cone. I didn’t ask for an action job. This gun didn’t require it. I see no evidence that any springs were replaced. I doubt they needed it.

A quick call to the great folks at Ajax Custom Grips got a box ‘o grips to the doorstep in short order. I tried each set of their stocks on the “new” .38/44 Heavy Duty, settling on their Ivory-look polymer. Mike Rafferty, another .38/44 owner, has a set of these on his nicely matt blued 4” Heavy Duty.

While I was at it, I put the Ajax wood grips on a Model 28 Highway Patrolman, the Magnum analog to the Outdoorsman. They fit up just right. Firing a few cylinders of hot Winchester .357 Magnum 125 grain JSP and Black Hills 158 grain JHP in the Model 28 confirmed that the open back, finger groove Ajax woods were perfect for the veteran Highway Patrolman.

My project was complete, but only with the help of the Performance Center, Gene DeSantis, Gun Parts Corporation and Ajax Custom Grips. To them and Mike Rafferty, I express my sincere gratitude.