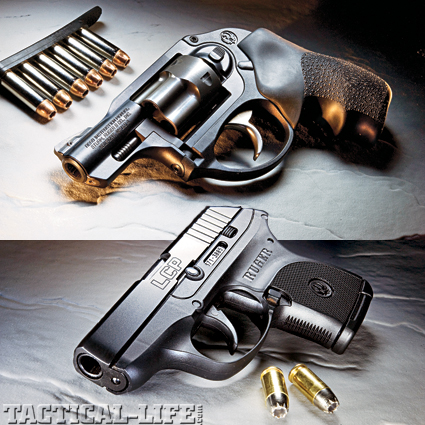 Ruger has a long history of crafting excellent guns for the hunting field and target range as well as capable duty sidearms. Now, the company that sells more guns than any other American company has gone after the heart of the market with the LCP.

The elephant in the room for anyone first seeing the LCP is that it looks familiar, strongly resembling the Kel-Tec P-3AT. The similarity is undeniable and Ruger could scarcely have chosen a better pistol to emulate. The LCP, like the P-3AT, is extremely small, lightweight and handy. It is also shootable and comparatively effective, relative to similarly sized guns. 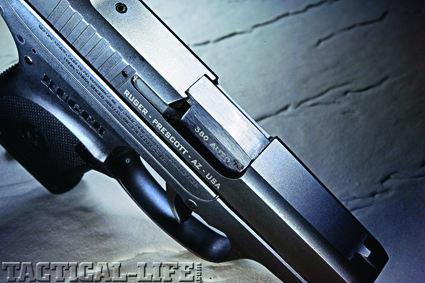 The LCP has a viewing port at the rear of the ejection port, allowing the user to see the chambered cartridge.

Many have proclaimed the .380 ACP cartridge to be the absolute minimum for self-defense carry. The LCP offers .380 ACP power in a package as small and light (and usually lighter) than that of popular .22 LR and .25 ACP caliber mouse guns. With a pocket holster, there are few circumstances in which this pistol cannot be carried discreetly.

The gun itself is a tilting barrel, locked breech design using nested recoil springs on a steel guide rod. That is a fair degree of sophistication at a price point more often associated with straight blowback guns. The pistol’s light weight (9.42 ounces) is achieved with a glass-filled nylon frame topped by a hardened steel slide. More than 20 years since the advent of the Glock, a polymer frame scarcely raises an eyebrow anymore—more often sought after as a highly desirable feature in a carry pistol.

For such a small gun, the LCP’s ergonomics are excellent. It is comfortable and easy to manipulate, even for those with large hands. Additional praiseworthy features include the trigger, loaded chamber indicator and slide hold-open lever. The trigger is unusually good for a DAO (double-action only) pistol. Ours measured 6 pounds, 13 ounces and was smooth, though a little stagy in slow fire. Of course, slow fire is not what this little gun was created for.

A viewing port allows the operator to see the case of a chambered cartridge, confirming the gun is ready to rock. That may seem like a small thing, but not having to retract the slide to check the chamber becomes a big thing to those who carry daily. An advantage the Ruger has over similar designs is a manual slide hold-open device. While the slide does not lock back upon the last shot out of the six round magazine, it can be locked back manually. Although that’s of no tactical advantage, it sure eases matters when making the weapon safe or cleaning it.

If there is a significant flaw to the LCP, it is the sights. Practically speaking, sights may be a non-issue for most people with this gun. For those who really have concerns, Ruger offers a Crimson Trace laser-equipped version with the module mounted to the triggerguard. It’s heavier and more expensive than the standard version, but worth it for those looking to maximize practical accuracy.

Range Time
The gun feels good though insubstantial in the hand. Despite the sights, it can be brought onto target quickly at close range. The grip frame allows space for only the thumb and first three fingers. Nonetheless, the gun is easily manageable with all but the hottest .380 ACP ammo. One of the reasons that this caliber is experiencing a Renaissance of sorts is the efficacy of the new high-tech bullets available now in all calibers. The LCP is designed for standard pressure rounds and handles such with aplomb. Nonetheless, the little gun perked along without incident regardless of what was loaded in it during testing. Accuracy at close range was very satisfactory. This is a gun for conversational distance, which just happens to be the distance of most gunfights. 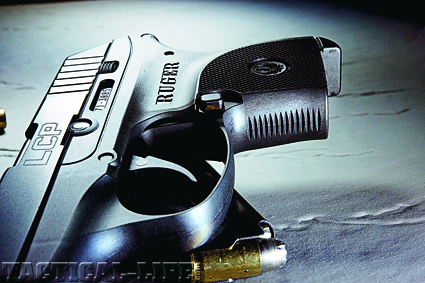 The sculpted grip of the LCP offers surprisingly good ergonomics for such a small pistol.

Where the gun shines is while doing what a carry gun does most – being carried. Worn with a pocket holster inside a front pants pocket, the gun is hardly noticeable, even under lightweight fabrics. It doesn’t snag clothing, swing into you while you stride along or bulge suspiciously. It’s easy to forget you are carrying it, but reassuring when you remember that you are. With it’s snag-free profile, simple manual of arms and excellent reliability, the LCP can be brought into action very quickly. And, more importantly, with its size and lightweight it can always be there with you when you need it. 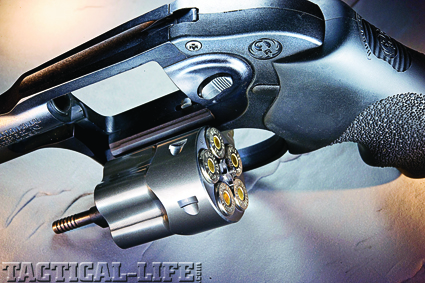 Ruger eliminated unnecessary weight from the cylinder while making a bold statement.

The first Ruger LCR revolver to emerge off of the factory production line was pointed squarely at the venerable Smith & Wesson J-frame revolver. The small frame revolver has remained a fixture of the handgun market. With new gun owners exercising their right to carry, the appeal of the revolver’s simplicity and reliability may be more significant than ever.

When Ruger announced it was going full bore into the small carry revolver market, the news was initially met with a shrug. S&W had the best hardware, Taurus had the best price point. What was Ruger going to do, offer something in between? We’re talking about the age-old snub-nose wheelgun. How much room for innovation is there? A lot, apparently. 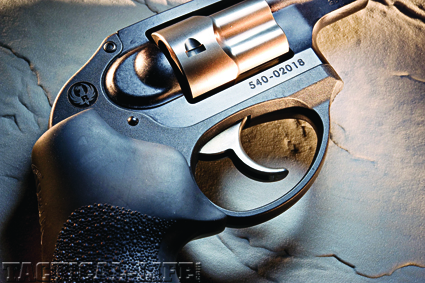 The LCR’s trigger was excellent for a DOA wheelgun, with a long, smooth stroke.

The “R” in LCR stands for revolver, but it could just as easily stand for revolution or revelation. The big news is that Ruger has brought polymer to the revolver market. More than 20 years have passed since Glock stood the semi-auto market on its collective ear with a polymer frame pistol, yet it took all this time for a gunmaker to bring the material to revolvers. In the case of the LCR (Lightweight Compact Revolver), Ruger has created a polymer grip frame that houses the steel fire-control components and mates to an aluminum alloy frame that contains the steel cylinder and barrel, and titanium locking parts. While it is definitely drawing attention, polymer brings the same virtues to the revolver that it brought to pistols. It is lightweight, rustproof, self-lubricating, immune to environmental factors, durable and easy to mold.

Those virtues cannot be over-emphasized in a gun that is intended to be carried everyday. As newly armed citizens quickly learn, anything that shaves weight off of a carry gun without compromising the gun’s reliability and shooting characteristics is to be appreciated. And low maintenance is a huge plus in a gun that’s going to get a lot of mileage yet has to be ready at a moment’s notice.

The polymer grip frame extends to form a humpbacked back strap reminiscent of the S&W Bodyguard, but without the Bodyguard’s cockable hammer spur. The purpose of the rounded contour is obvious – snag resistance when the gun is drawn from concealment. The lower grip frame that houses the fire-control components is clean and compact with all the working parts tightly, securely nestled together. If one item competes for attention with the grip frame when you first see the LCR, it is the cylinder. The LCR’s cylinder is virtually skeletonized with the contours of the individual chambers plainly apparent. It seems Ruger’s has recognized and exploited the advances made in the quality of modern steel, as it’s no longer necessary to have a lot of mass in a cylinder. And while sights on many small carry guns are completely neglected, Ruger took the time and trouble to equip the LCR with a pinned, serrated, ramp-up front.

The stock unit, which works well with the rear notch and breaks up glare, can easily be replaced with a colored ramp, a fiber optic unit, a tritium dot or whatever else the end user wants. While it took some shooters a moment or two to wrap their minds around the plastic grip frame and skeletonized cylinder, it didn’t take anyone long to wrap their minds or mitts around the grips. The Hogue Tamer grips that come as one option with the LCR (the other is Crimson Trace LaserGrips) were universally lauded. These are short but hand-filling neoprene grips with finger grooves and palm swells. And there’s a little recoil-absorbing pad positioned just under the web of the shooter’s hand. The one-piece frame is made from a 7000 series aluminum alloy forging that has what is termed a “synergistic” black hardcoat, which the company says is markedly superior to anodizing.

Range Time
Handling was a pleasant surprise. Ergonomics are generally not the strong suit of small frame snubbies. However, this is one of the easiest guns to get used to, and the grips are primarily responsible. An unanticipated advantage of the polymer grip frame is that it promotes a slight muzzle heaviness. This advantageous balance is generally not expected in a gun with a 1.875-inch barrel. The smooth-faced trigger is excellent for a DAO revolver. It feels much lighter than the 10 pounds, 6 ounces ours measures. It is smooth and consistent with virtually no stacking.

The gun shoots like a bigger, heavier gun. One has to remember that it weighs only 13.5 ounces. It looks and handles larger. Felt recoil is moderate—you’ll know it went off, particularly with +P ammo, but it’s controllable. Standard pressure loads are easily digested and seem within the handling capabilities of even the most novice shooter. Accuracy was more than satisfactory for its intended role as a close quarters personal protection gun.

Final Notes
This new Ruger represents, if not a quantum leap, then certainly a major step. It is an entirely new approach to small revolver design that doesn’t merely hang its hat on a single, radically new design element. Ruger considered virtually every major component, and those components that haven’t been radically redesigned are nonetheless state-of-the-art. Ruger didn’t integrate one new thing into an existing platform; it created several new things and integrated them all into something that was not only workable, but high performing. Firearms alchemy, pure and simple.