0
SHARES
134
VIEWS
Share on FacebookShare on Twitter
CCW options now range from powerhouse .45’s like the Kimber (top), to the Glock
subcompact .40 underneath, the traditional .38 wheelgun or the smallest .380 (bottom). Steve Woods photo.

The concept of a readily concealable personal protection pistol is nothing new. Early in the 19th Century, Philadelphia’s Henry Deringer developed the Deringer as a super small flintlock and later percussion cap pistol that became popular for personal protection—glamorized by riverboat gamblers on the Mississippi as well as concealed carry by Royals. Its popularity became so marketable that (eventually misspelled) “Derringer” became synonymous for all small “belly guns.” At the turn of the 20th Century, with the advent of metallic cartridges the pocket pistol of choice was the Bulldog by American, British or Belgium gunmakers. The Bulldog was a cheap and simple short-barreled revolver, so popular that versions, both licensed and unlicensed were built all over the world.

Looking to develop smaller pistol cartridges for less bulky firearms, John Browning developed the .32 Automatic Colt Pistol (ACP) for the Fabrique Nationale (FN) M1900 semi-automatic pistol in 1899 and the .25 ACP centerfire pistol cartridge in 1905 for the FN 1905 semi-automatic pistol. That began a flood of small caliber pocket pistols that were carried in the pockets of citizens on their way to see Chaplin in “The Tramp” and decades later to watch Bogey in “Casablanca” use his Colt .32 to shoot Nazi Major Strasser. Overall, revolvers still were the preferred weapon of choice so for the next forty years the popular and reliable “snub nose” revolvers by S&W, Colt and H&R were carried in pockets, waistbands and shoulder holsters. Later in the 1960’s and 70’s the derogatory term “Saturday Night Special” came into use (primarily by anti-gun advocates) to describe the type of cheap, sloppily constructed and generally unsafe .25,.32 and .380 pistols made for concealed carry. Between the sloppy engineering, poor manufacturing and substandard, pot metal materials, whoever pulled the trigger on these poorly constructed pocket pistols was taking a risk. 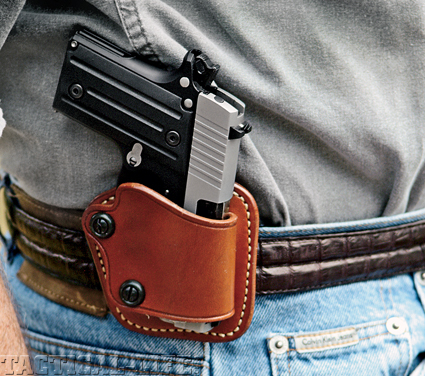 Russet leather is traditional but hard to beat for looks and use. Photo by Dennis Adler.

The past few decades have seen a resurgence of excellent engineering and development of very high quality small firearms designed for concealed carry as well as superb defensive ammunition. This was partially prompted by the infamous Miami 1986 shootout between eight FBI Agents and two serial bank robbers, resulting in the deaths of the bad guys and wounding of seven of the FBI agents—two of them mortally. The inability of the agents to immediately establish fire superiority clearly demonstrated that the then-current law enforcement weapons and training were inadequate. That tragedy signaled the end of cops and citizens being satisfied with their five and six shot S&W and Colt .38 Special two-inch revolvers or cheaply made .380 ACP autos with ball ammo. The newest generation of small, concealable pistols that uses the best materials and brilliant engineering by major companies to produce reliable weapons coupled with the latest generation of man-stopping ammunition has made the CCW market explode with options. The newest CCW pistols range from the superb smaller caliber polymer framed, lightweight pistols to compact and subcompact versions of full-size duty pistols that can provide the user with the capability to carry .380, 9mm, .40, .45 and even 10mm concealed, man-stopping carry pistols.

Choices
What is right for you is based on all the independent variables, conditions, climate and cost limitations unique to each person. The choices are plentiful no matter what direction you go. 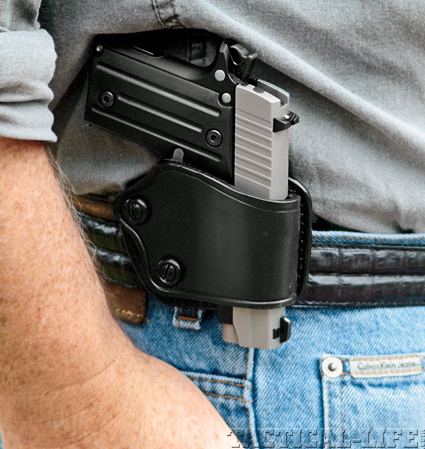 This Sig .380 is properly fitted to ride snugly against the body. Photo by Dennis Adler.

The list starts with Kel-Tec and their .380 P-3AT or .32 ACP P-32, Ruger’s newest LC9, and Ruger’s .380 LCP pistol with or without the Crimson Trace (CTC) Laserguard. Also in this skinny category are the Smith & Wesson polymer frame .380 Bodyguard 380 semi-auto and .38 Special Bodyguard revolver each with integrated Insight Technologies LASERs. Another major CCW manufacturer is Kahr that has their polymer frame .380 P380 semi-automatic with or without a loaded chamber indicator and Sig Sauer with their .380 ACP P238 subcompact pistol or the classic PP or PPK/S in .380 or .32 ACP.

Larger frames for concealed carry by bigger people include the Springfield Armory XD(M) compact pistol in 9mm, .40 S&W, and .45 ACP that offers a full-size caliber in a reduced package. Glock continues to excel with their powerhouse compact pistol models that include the G19 in 9x19mm, the G27 in .40, the G30 in .45 Auto, the G32 chambered in .357, the G38 in .45 G.A.P. and G25 in .380 Auto. Kahr is reintroducing the Baby Desert Eagle in 9mm .40 S&W and .45 ACP. The Colt Commander, Wilson Ultralight Carry Compact or the Kimber Super Carry pistol are classic choices for people who think that only the .45 ACP has a place in any gunfight. 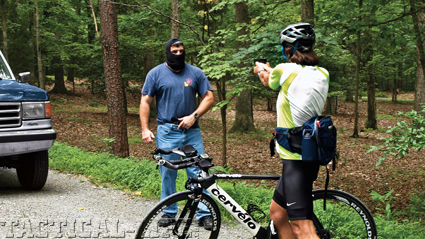 Effectiveness
However, the caliber of a handgun has nothing to do with the ability to deliver effective rounds on target to stop a threat. Good friend Richard “Rick” R. Porter—Vice President and Director of Competition for the U.S. National SWAT Championship and a retired a police Lieutenant with over 30 years of service including a SWAT Team leader, LE instructor, successful coach and national level marksman in both Three-Gun and Pistol matches—carries a .380 Kel-Tec loaded with Hornady Critical Defense round. Why? As Rick puts it, “No matter what the caliber, it all comes down to bullet placement!” 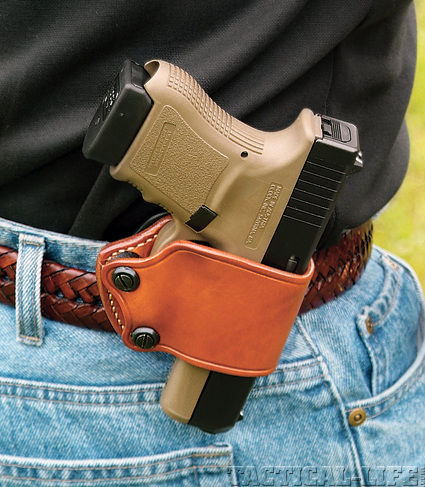 Carry of a large bore pistol can cause the weapon to pull away from the body. Photo by Dennis Adler.

The assassination of Abraham Lincoln, at Ford’s Theatre, was conducted by John Wilkes Booth, using a Philadelphia Deringer pistol. On 28 June 1914, Archduke Franz Ferdinand of Austria, heir apparent to the Austro-Hungarian throne, and his wife, Sophie, Duchess of Hohenberg, were assassinated in Sarajevo by Gavrilo Princip who fired two shots from close range using a Belgian-made 9x17mm (.380 ACP) Fabrique Nationale model 1910 semi-automatic pistol, hitting the Archduke in the jugular vein and inflicting an abdominal wound on the Duchess, both proving fatal. Adolph Hitler shot himself in the right temple with his own pistol, a 7.65x17mm (.32 ACP) Walther PPK. Overall—four shots, four kills.

Anybody who thinks that the smaller pistol or lesser caliber bullet is not significant or even useless needs to look at history to see that the location of the shot and the effectiveness of the shooter is of higher significance than the size or bore diameter of the weapon. The course of post Civil War America was forever changed and WWI started and WWII ended in Europe all as a direct result of the much maligned and puny belly guns! 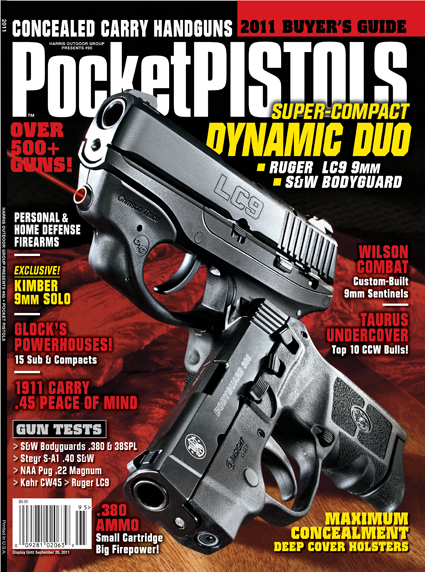