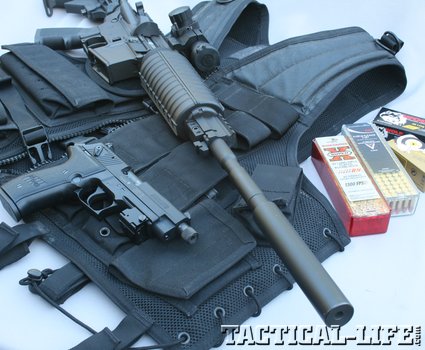 1 of 4
4_phatch
Lawmen can keep it quiet with the addition of an AAC .22LR suppressor to a firearm. Shown here is the Sig Mosquito pistol and CMMG Quebec rifle. 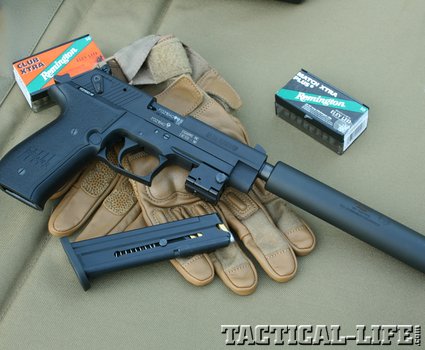 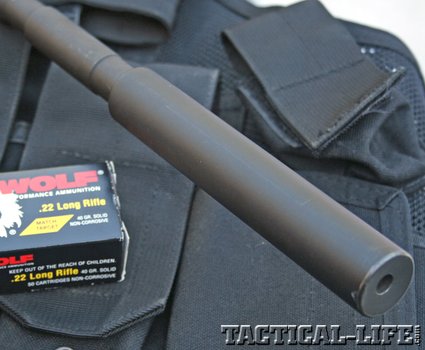 3 of 4
8_phatch
The barrel on the CMMG Quebec .22LR rifle has ½-28 TPI threading for a muzzle brake, or in this case, rimfire suppressor. 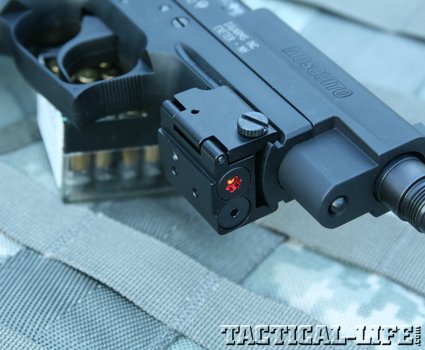 4 of 4
9_phatch
Adding a compact LaserLyte sight to the Sig added a new dimension to shooting with the suppressed Mosquito. 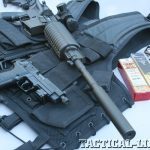 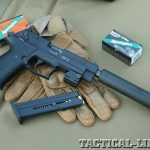 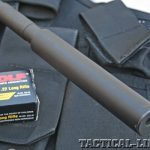 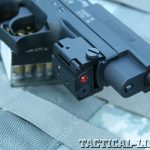 “This is going to be loud, I thought to myself as I was aiming in on it. Thankfully, it only took one shot, but yeah, it was loud.” A deputy sheriff described this scenario to me. He was forced to shoot a rabid raccoon holed up between two houses in a suburban neighborhood. Discharging his .40 S&W service pistol naturally drew the concern and curiosity of all within earshot.

From the time I entered the police academy, I’ve understood that there are many problems you will encounter that require a ballistic solution. Grievously wounded or rabid animals come to mind, particularly when they are in a populated area. Rabies among domestic dogs has been nearly eradicated in the United States, but among wild animals, particularly raccoons, it flares up frequently. Animals out of their minds with the disease will attack pets and, even worse, children. For the cop on the beat, you can’t simply chalk that up as someone else’s problem—it’s yours.

The dilemma is that your service pistol or shotgun is going to generate a lot of noise and a small issue can become a larger one. Also, centerfire pistol bullets have a tendency to penetrate the target and keep right on going. For this reason, many agencies keep .22 LR pistols or rifles in the trunks of their units as nuisance/wounded animal guns.

Although the audible signature of a .22 rimfire cartridge is tremendously less than that of an officer’s duty pistol, in the quiet of night it can still be quite loud. This is particularly true for a pistol. You may be required to fire numerous shots. Many areas are plagued with varmints and nuisance animals. The Greater New Orleans area has had to deal with nutria rats damaging the levees. In the Midwest and Northeast, it’s groundhogs or woodchucks. Out West, you have prairie dogs. Advanced Armament Corporation (AAC) has a number of .22LR suppressor models to quiet those rimfire guns.

AAC rimfire suppressors are affixed to the barrel of a pistol or rifle with a ½-28 TPI attachment (thread on). They are constructed with high strength aluminum to keep their weight down. Each AAC suppressor has a corrosion-resistant coating. AAC calls this “SCARmor.”

Pistol: For this review, I would work with a semi-automatic pistol and rifle. The handgun was the .22LR Mosquito from Sig Sauer. Several configurations are available, and this model arrived with a threaded barrel. However, an adapter from AAC was required to mount their rimfire suppressor to it. The Mosquito includes an accessory rail on the frame. I added a new sub-compact red laser from LaserLyte onto this rail. This provided more accuracy when shooting the suppressed pistol.

Rifle: M4-style rifles chambered in .22LR are all the rage today, and for good reason. You get the look, feel, and near identical operating characteristics of a centerfire rifle with a rimfire price tag. Most of the big name rifle makers are offering rimfire ARs. The model featured herein is the new Quebec .22LR from CMMG. The barrel on the CMMG rifle has ½-28 TPI threading to accept a standard muzzle brake. This also mates perfectly with AAC’s rimfire suppressors. During this test, I would use a Bushnell Zoom Dot optic as my primary sighting system.

1 of 4
4_phatch
Lawmen can keep it quiet with the addition of an AAC .22LR suppressor to a firearm. Shown here is the Sig Mosquito pistol and CMMG Quebec rifle.

3 of 4
8_phatch
The barrel on the CMMG Quebec .22LR rifle has ½-28 TPI threading for a muzzle brake, or in this case, rimfire suppressor.

4 of 4
9_phatch
Adding a compact LaserLyte sight to the Sig added a new dimension to shooting with the suppressed Mosquito.

In order to thoroughly examine the guns, both with and without a suppressor attached, I decided to work with four different .22LR loads. These would include ammunition from CCI, Lapua, Winchester and Wolf. The CCI and Winchester loads were copper-plated, super-sonic ammunition. The Lapua and Wolf loads were standard velocity using lubricated solid lead bullets.

The first step in the evaluation would be to chronograph every load, both suppressed and unsuppressed, through both the pistol and rifle. And I encountered an interesting phenomenon.

It seemed that the addition of the AAC suppressor to the pistol acted as a barrel extension on the pistol. Velocities increased across the board. The increase was somewhere around three to four percent. Conversely, when the suppressor was added to the rifle, the opposite effect took place. Average velocities from the rifle dropped about two to three percent. Neither of these are huge gains or losses, but I thought it interesting to mention.

From the accuracy standpoint, all the shot groups seemed to tighten up a bit with suppressors. The gains, again, where slight. I suppose the biggest lesson to take away is the fact that the addition of a suppressor did not adversely affect the accuracy of either the pistol or the rifle. I did notice a slight shift in the zero. Regarding the rifle, rounds impacted about an inch or two lower at 50 yards. The pistol rounds also impacted slightly lower at 15 yards.

Let’s talk about noise for bit. With regards to the pistol, the target loads from Lapua and Wolf were both sub-sonic so the normal “snap” associated with the .22 LR was absent. The CCI Mini Mag and Winchester Super X load cycled well through the Sig pistol and made a bit more noise. In any case, the suppressed Sig Mosquito was never much louder that a pneumatic pellet gun.

The rifle was a slightly different story. From the Quebec’s 16-inch barrel, both the CCI and Winchester loads remained super-sonic and the audible crack as the bullet broke the sound barrier was very distinctive. However, the suppressor did act as a bit of ventriloquist. The noise from the shot is not perceived at the gun, but out in front of it.

Using the Lapua and Wolf ammunition in the rifle was a different story altogether. This ammunition hovered around the 1,000 FPS (feet per second) range and the shot noise was truly suppressed. The only sound that could be heard was the action cycling and the impact of the bullets in the dirt berm.

For the lawman out in the field, there are definitely situations where a ballistic solution is the only answer to the problem. Should you be called upon to put down a rabid/dangerous animal, the rimfire is often the best choice. In addition, there are several tactical situations where an LE officer would be helped by the ability to take a silent shot.

The noise of gunfire is rarely a welcome one in urban or suburban areas. Modern suppressor companies, such as AAC, offer a variety of options. Sometimes it is better to keep things quiet. 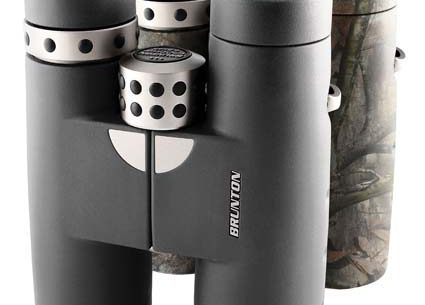 “This is going to be loud, I thought to myself as I was aiming…