by William Bell
in Exclusives
0

For 158 years, Smith & Wesson has been meeting the needs of legally armed citizens in the area of self-protection and home defense. S&W started out making a tiny .22 rimfire revolver meant primarily for defensive use. In the ensuing decades, they have produced revolvers and semi-automatic pistols that have become standards for civilian, law enforcement, and military use. From the 1870s until WWII, the company was known for its small, hinged-framed revolvers in .32 and .38 S&W. In 1950, they introduced the Chief’s Special, which has become a concealed carry classic. Then, as semi-automatics became more popular, in 1955 S&W introduced the Model 39, a double-action pistol in 9mm Luger that spawned a whole family of second and third generations.

Built For Self Defense

S&W recently announced plans to produce a line of semi-automatic pistols designed with personal protection and home defense in mind.

Designated the SD (Self Defense) Pistol Series, production SD handguns recently became available and I requested a test gun for evaluation in .40 S&W caliber. Both the SD40 and 9mm SD9 offer a variety of features that address home and personal defense applications. According to Tom Kelley, vice president of marketing for S&W, “The new SD9 and SD40 pistols combine the best of both price and functionality in a reliable, ergonomic firearm engineered with one specific goal in mind—self-defense.”

In fact, the SD9 and SD40, with MSRPs of $459 fall well below the price of a similar sized M&P semi-auto or SIG Sauer P250 Compact. They are in the same ballpark price-wise as other popular mid-sized pistols like the Glock 23 and Ruger SR40. In a move to make the SD Series compatible with your particular jurisdiction, S&W has an SD9 with either a 16+1 or a 10+1 capacity and an SD40 with a 14+1 or 10+1 capacity. My sample of the SD40 sported a full-capacity 14-round magazine.

I was one of a group of gun writers who were invited down to central Florida in 1993 for S&W’s unveiling of the Sigma Series of pistols, the organization’s first venture into the production of polymer frame, striker-fired pistols. The Sigma was a big success for S&W and the line continues today. When I first saw the SD Series pistols, they reminded me of the Sigma, especially the frame as they have the same 18-degree grip frame angle, making for good “pointability” and control, plus the slide release catch, magazine release and takedown are virtually the same. The frame also has some hints of the M&P line, like the textured panels on the sides of the grip frame and the universal Picatinny-style rail. The shape of the slide also is reminiscent of the M&P pistols more so than the Sigma. 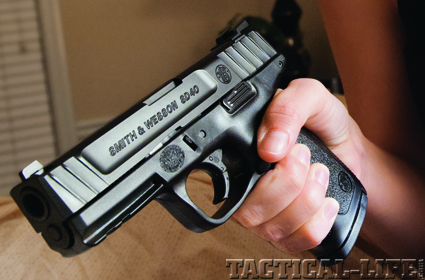 The SD pistols are slightly more compact and slender than the Sigma line, with a width of only 1.29 inches and an empty weight of 22.7 ounces. Both types of pistols are made with lightweight polymer frames and the slides and barrels are stainless steel with a tough black Melonite finish on the SD models. This finish not only reduces glare for the shooter, but also has a surface hardness of 68 on the Rockwell scale, increasing durability. Another important feature—the SDT (Self-Defense Trigger)—is designed to give the shooter a consistent trigger pull to aid in practical accuracy and help instill confidence in the user during the high stress of a self-defense situation.

Continuing the comparison with the Sigma, the SD, for a few dollars more, offers a number of refinements. Most importantly, you get steel sights that are dovetailed into the slide. Not only does the SD40 have steel sights, but it also has a tritium front sight to increase visibility in low light. The rear sight has white dots on either side of the square notch and I have found that in close range situations you are generally as well off with a night sight just on the front blade.

At the rear of the barrel, on top of the SD slide, is a port that allows a visual verification as to whether there is a round in the chamber. Those who like to do a “quick peek” to check their gun’s loaded status will be pleased to see that the SD Series of pistols have serrations on the front of the slide. These wide serrations are also on the rear of the slide and give really good purchase when retracting the slide. The front of the slide is also beveled, allowing smoother, gouge-free insertion of the handgun into the holster. The sides of the slide are dished-out between the two panels of serrations, giving it a look more closely resembling the M&P model pistol. For disassembly directions, see the owners manual—it’s simple, but be very cautious.

As mentioned earlier, the SD pistol has a universal Picatinny-style rail integral to the dust cover of the frame, where the Sigma does not. This of course facilitates the mounting of a tactical light or a laser sight. The trigger guard is less rounded than the one on the Sigma, and above it, just forward of the take-down latch on both sides of the frame, is a textured oval indentation that S&W has labeled a “finger locator.” This is a good spot to place the pad of your trigger finger until you’re 100 percent ready to pull the trigger. Both the front and back straps of the grip frame are aggressively checkered for a firm gripping surface. This is a good thing, as some of the zestier 140- to165-grain JHP loads in .40 S&W can be quite a handful, especially in a 22.7-ounce handgun. The magazine release button is in the usual location on an American pistol and is protected by a triangular-shaped raised polymer projection. Lastly, the edges of the magazine well are beveled to ease rapid insertion of a magazine; it’s made of stainless steel, with witness holes and a polymer base-plate. Each SD pistol comes with two magazines. You will need a magazine loader as the springs are heavy-duty and getting the last few rounds in can be challenging. 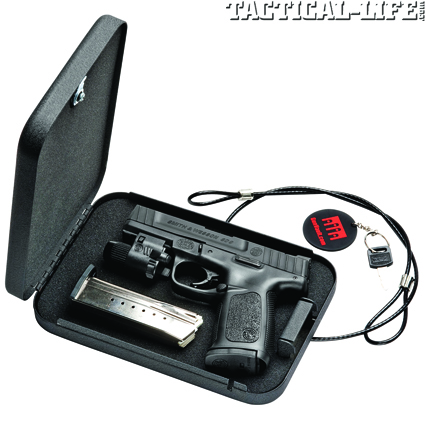 For a very modest asking price, the SD series pistols can be had with a Self Defense Kit that includes a 21-gauge steel case from NanoVault, a 1,500-pound-test steel cable, and an S&W Micro90 LED Compact Pistol Light – all are spot-on for home defense use

As if the creation of the SD Series pistols was not enough, S&W has assembled what they call a Home Defense Kit which consists of an SD9 or SD40 pistol, accompanied by a NanoVault Nano200, 21-gauge steel gun case, black in color. The case has a quarter-turn lock with two keys, keychain, and comes with a 1,500-pound test steel cable for use in securing your NanoVault case to an immoveable object. Inside, the case is lined with 1-inch thick memory fitting foam and it is big enough to hold your pistol and an extra magazine. What’s more, you get an S&W Micro90 Compact Pistol Light to fill that empty Picatinny-style rail on your SD. This LED light has a sturdy black impact-resistant nylon-reinforced poly­­­­­­mer housing, sporting a 90-Lumen output. It has a run-time of two continuous hours using one CR2 lithium battery (included) and has both momentary and constant-on light modes, with an ambidextrous on/off switch. The light attaches to the pistol using a UniBar latching system that requires no tools for installation.

You get all of this for a paltry $40 more than just the SD pistol by itself—that’s right, the MSRP is only $499 for the HDK.

For my shooting evaluation of the SD40, I selected the CorBon 140-grain DPW JHP load, Federal’s 165-grain Hydra-Shok JHP, MagTech Golden Guardian 155-grain JHP, and Winchester 180-grain PDX1 JHP cartridges. All loads were run through my Oehler chronograph. Then I set my target stand out at 15 yards and did some bench-rest shooting to test accuracy. I had a tough time warming up to the SDT trigger on the SD40 and went through several 5-shot groups before the clusters began to shrink; you will see that data in the accompanying table. This pistol seemed to prefer the MagTech ammo and with it I got my best group of the day at 1.58 inches. I don’t put a lot of stock in bullseye paper-punching with a gun primarily meant to take into harm’s way, so I was not concerned that my groups were probably not what they could have been.

Next the SD40 was put through a couple of 30-round practical combat courses and for this I used Winchester USA 180-grain FMJ flat point ammo. Shooting commenced at 3 yards with strong and support-hand only shooting; six rounds were fired with each hand. Backing off to 7 yards, I shot a series of three double-taps; then did two ballistic vest drills with two shots center-mass and one to the head. At the 15-yard barricade, two shots were fired standing left-side, then two right-side, and finally two right-side kneeling. All shooting began from the leather, with magazine changes as needed. 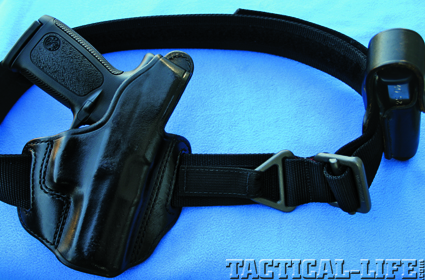 The SD40 accounted for itself admirably. It was easy to control in rapid-fire, the sights were well regulated and highly visible, plus, considering I took the handgun right out of the box and onto the range, it went through some 150 rounds without a malfunction. My unabashed recommendation: check out the SD Series of pistols for your home and self-defense needs. It will prove a dependable partner.