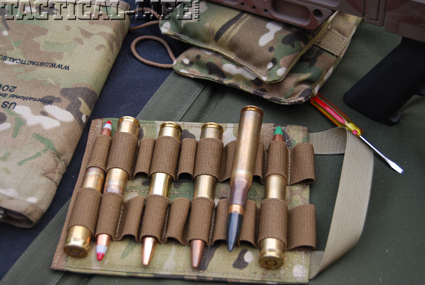 If you shoot fifty caliber rifles then I don’t need to tell you about the weight and mass of your ammunition. Once you have adapted your combat load to carry enough ammo for the mission you will face the next issue. How to carry those loaded magazines and the extra ammunition that is not loaded in a magazine, silently, securely and accessible.

Once compressed inside the heavy magazine, fifty caliber cartridges do not emit any noise at all, but inside their box they rattle loudly. Worst of all, when half empty, the heavy boxes move around like crazy and generate even more noise. I have tried all kinds of pouches for the 1.84 Kg heavy Barrett magazines and standard ten round ammo boxes, plastic or carton, but only a couple actually worked. The best: Tactical Taylor medical kit pouch, inside which the full box or Barrett ten round magazine fits like a glove and does not move at all.

Even with your magazines secured inside the pouches, the problem still lies in the terrible noise the rattling ammo you carry in boxes make. You will need to load all your ammo in magazines of face detection and if you fire a non magazine loaded rifle, then all of you ammo will be loose and noisy. Not anymore, as Shaddox Tactical has addressed the issue and designed a carrier with the tactical operator in mind.

Clayton Shaddox has an extensive Special Operations background. A Ranger himself, he recognized the problem and found a way to carry the ammo silently, but ready at hand. The idea is not new, as elastic carriers have been with us for ages, but his novel approach is unique. 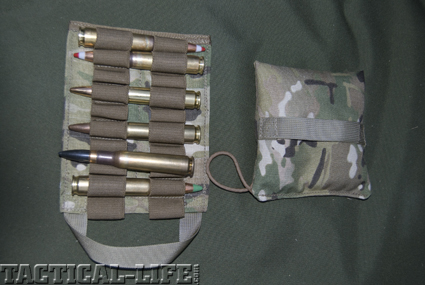 To hold the massive carrier it has a 1” webbing handle and it´s size is perfect to fit inside the sniper´s BDU pockets. It is big enough so that it fits snugly inside and still slides out easily when you pull the handle. The carrier is made out from Cordura 1000, heavily reinforced in the sides and corners with nylon tape . The front face has sewn double elastic 1 ½” bands that secure each round in its position. The cartridges are inserted each one opposite to the other to avoid side play on the big case shoulders and the tips are in plain view so can select the load to pick. 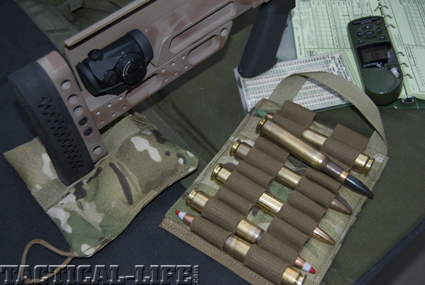 I like to carry all my team´s extra ammunition on these carriers, each loaded with ten rounds of Nammo MK211 Multipurpose or API rounds. They are fitted and secured inside the compartments of my Eberlestock Phantom rucksack, along with the tripod and spotting scope. Then don’t make any noise at all and the heavy load is balanced side to side. Then we carry two extra carriers with an assorted load of some extra MK211, RUAG sniper ball, some API-T and some MK211-T inside an external 5.11 model “6.10 vertical pouch”. With my two Barrett magazines fully loaded, another two from my spotter and the four “ammo-mix” carriers, we can face any challenge. I use the exact same configuration when I carry my McRee bolt action, less the loaded mags, so I always know where my special ammo rounds are.

The carriers can be had in the standard Multicam and in seven more camouflage patterns including Russian SURPAT . They are also available in plain Coyote, Khaki, OD and Ranger Green. The same colors are available on the other impressive Shaddox products that have ended up on my kit: It´s 45 degrees MOLLE/PALS adapters and the Cordura bean bags. Bean bags where common some years ago but the widespread adoption of monopods on many rifle designs, have made them “a thing of the past”. I never understood why because I love their versatility and simplicity.

Most times you shoot flat or looking down with a Barrett. The Barrett M82 rear monopod reflects this truth of combat: “ambushes and sniping are better looking down”. Who has the high position has a definite advantage. Thus aiming up with a Barrett monopod is nearly impossible. Either you have to remove it and put the stock on the ground or remove it and place a small bean bag for soft/hard support and elevation adjustment.

These bean bags have a nice feature which is a small loop or paracord so you can tie them up and drag them with you, when you change your shooting position. I appreciate it, as I have lost several bean bags over the years, when I ran too fast and left them behind.

I found Shaddox Tactical products when my good friend Keith Pagel told me about their unique ammo carrier, but now I also use their 45 degrees MOLLE/PALS adaptors and the small bean bag too. The silent carriers allow me a lot of flexibility when arranging my special purpose ammunition and provide me with something I never had before, silent fifty cal ammo pouches.

For more information check out: