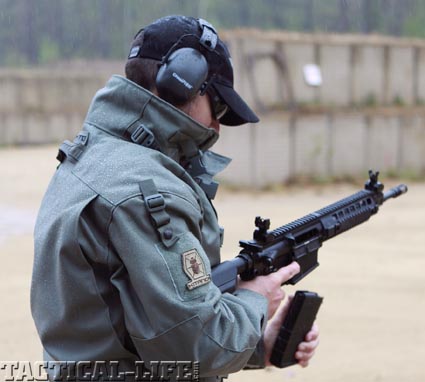 You have to give Sig Sauer credit. When they rolled out the new civilian-legal, complete short-barreled rifle (SBR) program they decided to go all out. The company is offering all of their tactical rifles in this configuration, from .22 LR to 7.62mm NATO, and aggressively marketing them for consumer sales in states where they can be registered.

I recently had the opportunity to test out the biggest and baddest of these at the Sig Sauer Academy in Exeter, New Hampshier. The SIG716 is a semi-automatic rifle that uses the same proven short-stroke gas piston system as the critically acclaimed SIG516, but it’s beefed up to handle the full-power 7.62mm NATO round.

While externally it looks and operates the same as a standard AR, this rifle features all of the internal Sig Sauer upgrades, including the upper and lower receiver tensioning device for a tighter fit and better accuracy, and the extractor support pin inside the barrel extension. Externally, the rifle has an ambidextrous magazine release and standard quad-rail handguard. 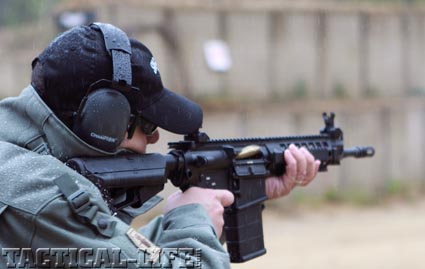 Despite the short 12-inch barrel, which keeps the whole gun down to an overall length of less than 35 inches, the rifle handled recoil very well and was easy to keep on target, but it certainly announces itself with a loud bark. The gas piston system also makes it well suited for suppressed fire, and with standard 20-round Magpul PMAG magazines, there is plenty to smile about. 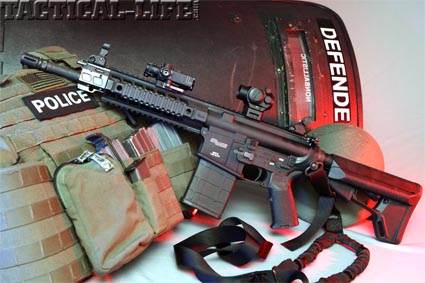 I tested the SIG716 from the bench rest using iron sights at 60 yards during an informal range session and had no trouble keeping groups well under 2 inches. Look for upcoming features in future magazines. 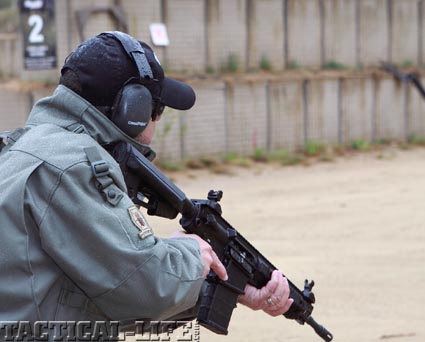 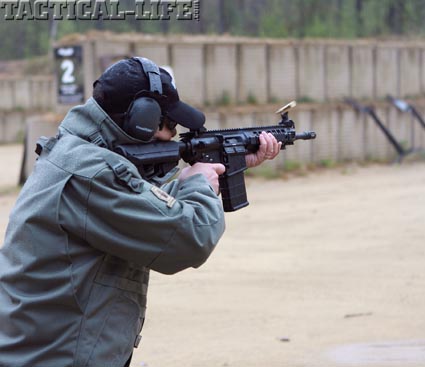 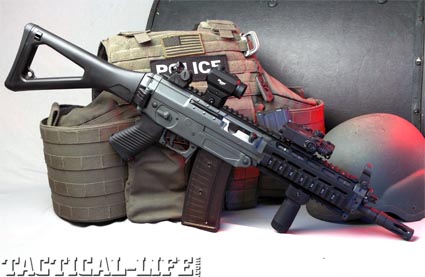 Sig Sauer has long been known as a “pistol company” to American shooters and only in the past few years have they begun to offer tactical rifles in the U.S. They are now increasing their production line and aggressively marketing complete civilian-legal short-barreled rifles, or SBRs.

I recently visited the Sig Sauer factory in Exeter, New Hampshire, to give the new SIG551-A1 SBR a quick run through. Chambered for the 5.56mm NATO round, this semi-auto, long-stroke-piston-operated gun closely approximates the original Swiss military battle rifle with its side-folding stock and translucent polymer magazines. 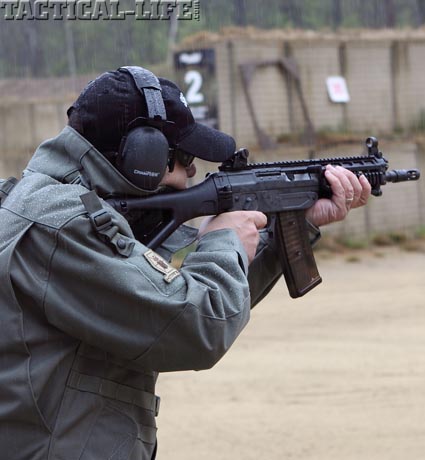 The 10-inch mil-spec barrel has a 1-in-7-inch twist rate and a Swiss-style flash suppressor. The handguard can be had in the standard configuration or with a quad-rail, as we tested it, which links up nicely with the standard Picatinny rail on the upper receiver. Folded, the rifle is under 20 inches in length and can be quickly deployed to its fully extended length of just under 30 inches.

Accuracy testing using a red-dot scope at 60 yards and a rough bench rest produced very good results, consistently grouping at little more than an inch. With a proper rest and magnification, this SIG551-A1 SBR is capable of sub-MOA performance. Recoil and handling for this little rifle were both excellent, and there were no malfunctions experienced during a brief range session. Sig Sauer has tuned the gas systems on all of their new SBRs to function reliably with the shorter barrels. Look for upcoming features 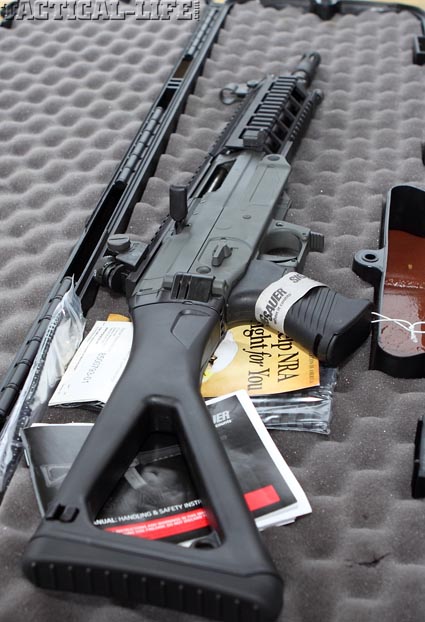 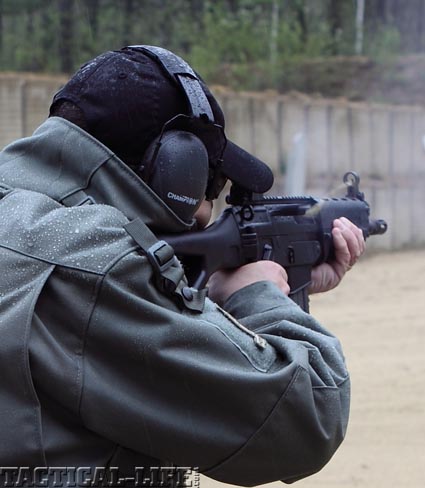 Touring the ranges at the excellent Sig Sauer Academy in Exeter, New Hampshire, I was able to put the new SIG556 SBR through it paces. This rifle, chambered in 5.56mm NATO, is a semi-auto, long-stroke-piston-operated gun. While the upper receiver closely approximates the original Swiss military battle rifle with its distinctive handguard, the lower receiver has been redesigned to accommodate standard AR magazines with a push-button magazine release.

The rifle still retains a Swiss-style folding stock and, fully deployed, it is under 30 inches in total length. With the stock folded, it becomes a miniscule sub-20-inch gun. The 10-inch mil-spec barrel has a 1-in-7-inch twist rate and an AR-style flash suppressor. 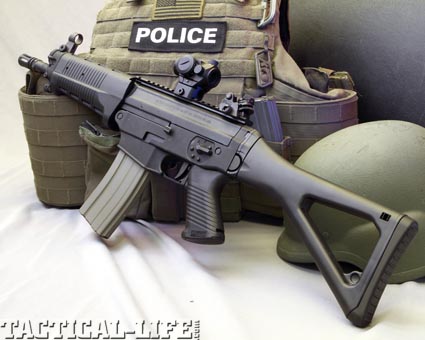 I tested the SIG556 SBR at 60 yards using a red-dot sight without magnification from a bench rest, albeit using the magazine as a field-expedient monopod. Still, accuracy was quite presentable, with groups averaging just over 1 inch at that distance. The rifle’s compact dimensions made it exceptionally easy to handle, and recoil was light, comparable to a full-sized AR carbine. 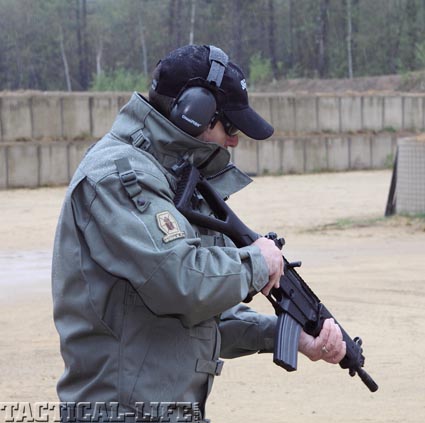 As expected and given Sig’s excellent piston-driven reliability, there were no malfunctions of any sort encountered. Sig Sauer has also tuned the actions on their SBRs to ensure reliable functioning despite the shorter-length barrels. Look for upcoming features in future magazines. For more information, visit sigsauer.com or call 603-772-2302. 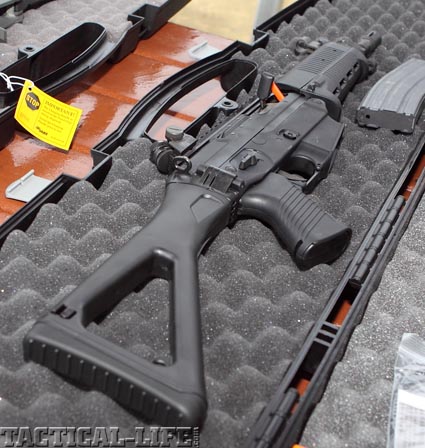