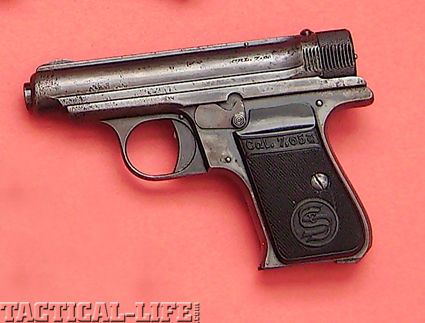 In 1974, J.P. Sauer & Sohn GmbH of Eckenforde, Germany, began partnering with SIG, the Swiss Industrial Company, to build impressive modern service pistols. (Readers in the USA should be aware that Sig Sauer, Inc. now forms a separate business entity from either the Swiss or German firms). J.P. Sauer, begun in 1751 in the eastern German city of Suhl, commenced handgun manufacture with outside designs, including the Reichsrevolver, in 1880, the unusual double-barreled Bar repeater from 1900 to 1914, and the Roth-Sauer long-recoil automatic pistol from 1905 to 1909.

Model 1913
Manufacturing others’ handguns made Sauer want to market their own. Heinz Zehner’s original design, patented May 20, 1912, entered production as the Sauer Model 1913, which chambered the .32 ACP (7.65mm Browning) cartridge—a world standard in smallish automatic pistols since FN introduced it in their Model 1900, John Browning’s first automatic pistol. The Model 1913 had a fixed 3-inch barrel, around which the recoil spring was placed, and a separate breechblock with the slide being a simple steel tube hollowed from the rear. This unique design avoided either the close tolerances in barrel-to-frame fit necessary in Browning pistols or the loose slide-to-frame fit Walther pistols require. It’s also very modern in concept, as only the breechblock required major machining, and the slide simply encloses the operating components. 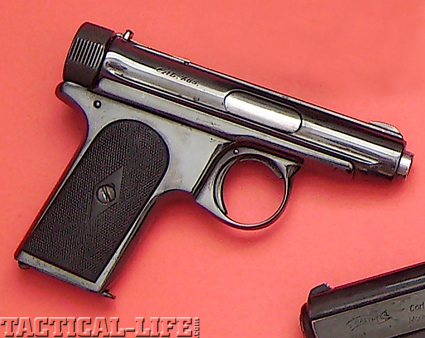 A screwed-in end cap held the striker in place. On the first 4,800 pistols, the end cap included a shallow groove on top through which the shooter squinted at the front sight. Afterwards, Sauer added a larger separate rear sight, which also held the end cap in place, pushing down to allow the shooter to unscrew the end cap for disassembly. The detachable box magazine held seven cartridges, while two slots in each side of the magazine allowed the shooter to examine the contents.

Since the pistol lacked an external hammer, Sauer included two clever features alerting the shooter to the pistol’s state of readiness: the mechanism allowed the manual safety to be set on safe only with the striker cocked, and with the mechanism cocked the trigger protruded slightly, revealing the number 1 on its left side. 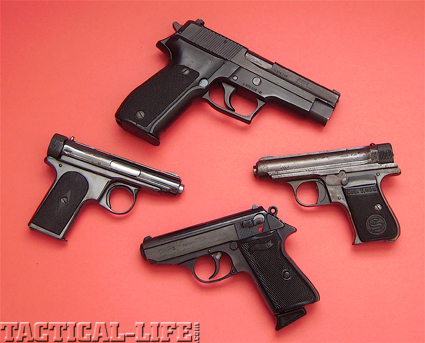 The Models 1913 (left) and 1930 (right) solidly established the J.P. Sauer company in automatic pistols, the P226 (top) being one of this company’s most respected later products in their current partnership with SIG. More modern competitors’ designs, such as Walther’s PP/PPK series of pistols (bottom), eventually drove the Model 1930 out of production.

The Model 1913 usually came in a high-polish blued finish with the barrel and breech left in the white, with grips of checkered hard rubber or newfangled Bakelite plastic, common today on the handles of pots and pans but then a marvel of Germany’s world-leading chemical industry. Regrettably, the rubber or Bakelite grips get brittle with age, and the locking tabs tend to loosen over time, particularly during shooting, so these parts often require replacement or repair.

The Model 1913 made an immediate impression on European police forces. During WWI, though the German army did not officially adopt it, officers privately purchased several thousand Model 1913s. At the war’s end in 1918, the factory halted Model 1913 production until 1922, when Sauer changed the triggerguard’s shape by making it flatter on the bottom, extending the end cap’s gripping serrations forward onto the slide’s rear portion, and altering the manual safety to lock the slide open, eliminating the latch in the triggerguard. Model 1913 serial numbers attained about 180,000. Many served in WWII as the German government continued to let selected personnel carry privately purchased handguns chosen from an approved list. A 1953 police handbook from communist East Germany still listed the Model 1913 for issue. Model 1913s abandoned by German units in Norway in 1945 saw extensive Norwegian police use for years after the war, these having the added marking “POLITI” followed by a serial number on the left slide. 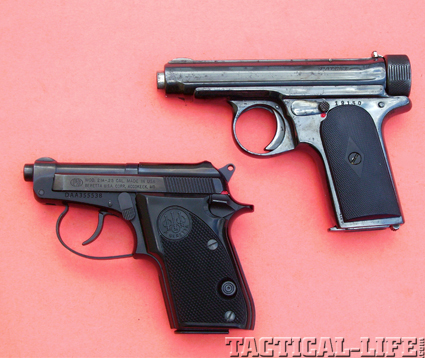 The Model 1913 achieved the difficult goal of putting .32-caliber ammo in a .25-sized package like a modern Beretta, even though the .32 cartridge has twice the .25’s power. Models 1913 and 1930 found favor both for concealed carry and as a holstered sidearm for police officers and soldiers, and both pistols generated a large and loyal following for civilian self-defense, too. With the striker cocked and the pistol ready to fire, the Model 1913’s trigger protruded slightly, showing the number 1 on its left side. 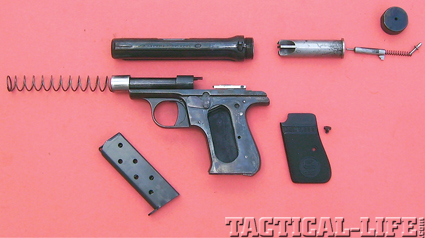 The Models 1913 and 1930 disassemble into slide, end cap with guide rod for the striker spring, a breechblock, striker, striker spring, frame and mag. The barrel remains on the frame, promoting accuracy, and doubles as the guide rod for the recoil spring, an aid to compactness. The Model 1930 shown here improved on the method of attaching the grips by substituting regular grip screws for the Model 1913’s problematic internal locking tabs and usually included a cocking indicator pin as seen here behind the striker spring.

Model 1930
J.P. Sauer’s Model 1930 retained the Model 1913’s basic design excellence while introducing valuable updates. Enlarging the rear sight made aiming easier while still letting it double as a disassembly latch. Curving the backstrap gave a more comfortable fit. Lengthening the grip tang protected the shooter’s hand during recoil, a common complaint with the older gun. An optional indicator pin protruded from the end cap with the striker cocked, a useful safety feature in this hammerless design and especially desirable since the trigger no longer included a cocking indicator.

In all but the earliest Model 1913s, and throughout Model 1930 production, the rear sight doubled as the lock for the end cap. The Model 1913 usually had German-language markings on the slide top as shown; the corresponding English-marked export variation reads “J.P. SAUER & SON, SUHL, PRUSSIA,” and is rare. The Sauer logo, a club-wielding barbarian, appears on both Models 1913 and 1930.

The Model 1930 was essentially the same size as the Model 1913; however, Sauer made one Model 1930 variant largely from aluminum alloy instead of steel, reducing its weight to just 15 ounces. Sauer made relatively few of these and they are exceedingly desirable today. Other unusual Model 1930s included .22 LR variants and others with a stainless steel barrel.

After about 10,000 Model 1930s, Sauer changed the fixed front sight to an adjustable type mounted in a dovetail and matted the slide top, moving the company markings to the side of the slide. In 1933, Sauer introduced the Behördenmodell (Authorities’ Model) standardizing the cocking indicator pin and incorporating an auxiliary safety lock tab in the trigger face in the manner of modern Glock pistols, deepening the trigger to include this feature.

Sauer sold Model 1930s and “Behördens” to German police, paramilitary and armed forces organizations; Nazi-era lists of handguns approved for private purchase included both Models 1913 and 1930, despite Sauer’s use of a magazine safety preventing firing with the magazine removed from the gun, a feature the Nazis disliked. The Dutch government also imported many Model 1930s for its police, army, navy and various government agencies—these being marked on the left slide with the importer’s mark “JOH. MUNTS-AMSTERDAM.” Model 1930s also exist with Norwegian “POLITI” post-WWII slide markings, though these are scarcer than Model 1913s. 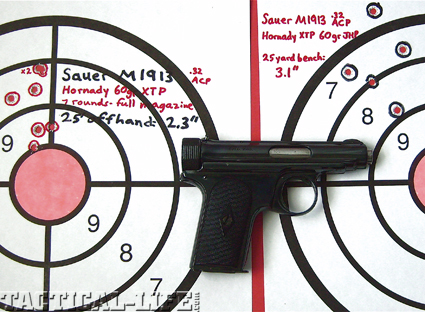 The test Model 1913’s best accuracy came with Hornady XTP, a top-shelf self-defense load in .32 ACP. These excellent results from this tiny relic from the dawn of the automatic pistol era are a testament to Sauer’s clever design and superb workmanship

Range Time
Despite the Model 1913’s tiny rear sight, the front sight, though thin, is tall enough to attract the shooter’s eye. The test pistol felt solid and fed both FMJ bullets and hollow points reliably. The trigger, though heavy, released precisely and predictably. Accuracy isn’t bad for this relic from the dawn of the automatic pistol era.

Model 1930 results were similar, and the pistol demonstrated tangible ergonomic improvements. Despite its worn finish (not unusual, in view of the extensive carry and use many of these working pistols underwent), the test pistol remained mechanically tight and functioned well. Either pistol makes an excellent, innovative and unusual design for a collector or recreational shooter, and maintained in good condition and loaded with compatible hollow point ammunition, remains a viable self-defense pistol. 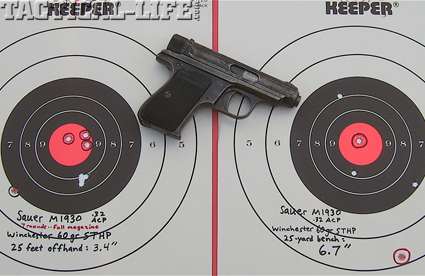 Final Notes
The Models 1913 and 1930 did much to make Sauer a successful handgun manufacturer. They’re also the conceptual ancestors of today’s ultra-compact .32 pistols built on .25-sized frames, notably the famous Seecamp LWS-32, the Beretta Tomcat and pistols by North American Arms. The concept of packing maximum firepower into a minimally sized package certainly remains valid today, and in their heyday Sauer’s compact .32s accomplished this better than any competing pistol design. 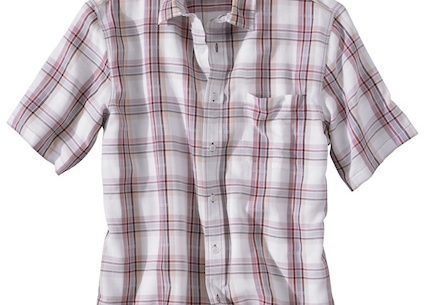