by Nick Jacobellis
in Exclusives
0

World War II combat around the Pacific Rim from the South Pacific to Western Alaska saw the use of weapons not issued, or very sparingly issued, in the North African and European theaters. The Pacific theater was not a backwater war, but it was at the end of a longer and weaker supply line, and it was regarded as future business to be concluded after the fall of the European Axis powers. Simply put, the European theater got first crack at the better and newer weapons, and during the first part of the war American forces and their Allies in the Pacific took what they could get. The best thing that could be said about some of the ordnance sent to the Pacific was that it was available, and it was replaced as soon as better, or more universal, weapons could be provided. For this reason, there were some weapons issued there not seen elsewhere in the war. In addition, after the rape of Nanking, Pearl Harbor, the Bataan Death March and our captured pilots being butchered so the enemy could eat their livers, there was greater tolerance for using any weapon that would get the job done, such as shotguns and flame throwers, and ultimately the atomic bomb.

In this review of WWII American small arms used in the Pacific Theater, we will make note of some that are available today as arsenal-refinished or newly manufactured reproductions of the originals, of interest to historians, collectors and shooters.

The Pacific Theater covered a wider geographic area of American involvement over a longer period of combat than the war in Europe and Africa, and saw some of the greatest sea and air battles in history. It was also the stage for some of the most grueling land campaigns of the war, where a motivated, well-armed and capable enemy had to be rooted out one suicidal fighter at a time from superbly prepared defensive positions on island after island. Studying some of the inadequate tools our Leathernecks and GIs were issued brings to point the truism that ultimately it is the warrior and not the weapon that determines the outcome of extended infantry combat.

The war in the Pacific was against an enemy who believed that their death in battle would be immensely rewarded in the hereafter and who would therefore fanatically fight to the death, to the last man, with no quarter expected or given. This meant that infantry engagements would not be over merely because the enemy suffered catastrophic 20 percent casualties. Enemy personnel were motivated to die in battle rather than surrender, as a way to honor their Emperor who was also their god. Does this sound familiar?

Based on the M1898 Mauser bolt-action rifle, the U.S. M1903 Springfield rifle was first issued in caliber .30-03. Starting in 1906, Springfield barrels were set back and rechambered to the .30-06 cartridge that served the U.S. well through two major wars. In World War I the Springfield was supplemented by M1917 Enfield, because it was available. The M1903 Springfield served through WW II, even though superseded by the M1 Garand.

The basic M1903 went through various modifications and adaptations. They included the Mk I, an adaptation for the Pedersen semi-auto device that fired a unique pistol-type cartridge from a large box magazine; 20-round magazines in .30-06 that were intended to give it greater firepower for firing from WW I aircraft, and its WW II-era iteration as the M1903A3. The M1903A3 was further fitted with a bent bolt and scope to become the M1904A4 sniper rifle. (The M1903A1 was short-lived version ’03 with a Type C stock, the M1903A2 was a modified rifle for use as a tank spotting rifle.) While the M1903 had its sights on the barrel—arguably the finest sights ever put on a battle rifle—the rear sight of the ’03A3 was a peep sight mounted on the rear of the receiver. Most had 2-groove barrels. Although not the battle rifle the auto-loading Garand was, the Springfield was a superb rifle, better in caliber, quality and accuracy than the Japanese weapons it faced in the Pacific. During World War II 1.4 million M1903 variants were produced, mostly in the M1903A3 configuration with the receiver-mounted sight.

The M1903 weighed 8.6 pounds, was 43.9 inches long and had a 24-inch barrel. The fixed Mauser-type magazine held five rounds, and could be fed single rounds or via a 5-round stripper clip. The Springfield in both models was used throughout the Pacific, even after the Garand became available.

M1897 WINCHESTER TRENCH GUN
Trench warfare in World War I illustrated the need for massive short-range firepower, and the submachine gun was yet to be deployed, so existing M1897 12-gauge shotguns were cut back to a cylinder bore and fitted with a heat shield/bayonet mount that would accept the M1917 Enfield bayonet. The John Browning design served well in this role, and although they were superseded by the Model 1912, they continued to serve the U.S. military through the middle of the 20th Century, including WW II in the Pacific by Army and Marine forces, where it supplemented stocks of the more common M12. 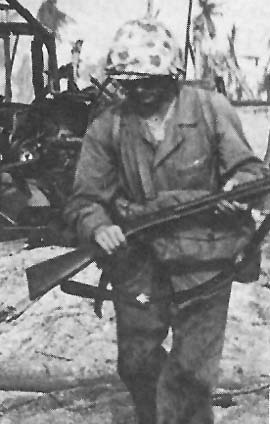 M1912 WINCHESTER TRENCH GUN
The Model 12 was designed by Winchester engineer Thomas Johnson, and was based in part on the M1893/97 design by John Browning. Used in trench gun configuration in World War I, more than 80,000 Model 12s were purchased during WW II by the Marines, Army and Navy, most going to the Pacific. Riot gun versions, without the heat shield and bayonet mount, were purchased by the Army for use in defending bases and in protecting aircraft against saboteurs; the Navy similarly purchased and used the riot gun version for protecting ships and personnel when in foreign ports. Marines used the trench gun version of the Model 12 with considerable success in taking the Pacific’s Japanese-held islands. The primary difference between the WW I and WW II Model 12 trench guns is that the heat sheild in WW I had six rows of ventilating holes, those made in WW II, four. Nearly 2 million Model 12s were made during its years of production, including those made for military use.

BROWNING AUTO-5 SHOTGUN
Patented in 1900, the Browning Auto-5 was the first mass-produced semiautomatic shotgun, and it was made for nearly a hundred years by various makers, during which time it became the second-best-selling auto-loading shotgun in U.S. history, after the Remington 1100. Although not acquired or issued in the numbers of the Model 12, the Browning Auto 5 was procurred for GI issue—at least some of which were taken from civilian production as Army Ordnance manuals illustrated models with scroll engraving. More sensitive to jungle conditions, especially paper shotgun shells that had swelled due to the humidity, the Auto 5 did not receive the distribution in the Pacific Theater of shotguns such as the Model 12.

Most World War II aficionados and GIs who carried them in Korea and through the first part of the Cold War are fans of the M1 Garand rifle. Gen. George Patton declared it the greatest implement of battle ever devised. The Garand is a gas-operated semi-automatic rifle featuring an adjustable rear peep sight, a 24-inch barrel and fed from an eight round clip “en bloc” clip of ammunition. It weighs 9-1/2 pounds, is 43.6 inches long and accommodates the same bayonet as the Springfield rifles. The safety device is located in front of the trigger guard for easy access by the operator. The M1 Garand could fire rifle grenades. More than 4 million M1 Garand rifles were reportedly manufactured during W.W. II.

History reports that during the Battle of Guadalcanal some U.S. Marines “liberated” M1 Garands and other weapons and supplies from Army stockpiles that were landed on Kukum Beach on Guadalcanal in October 1942. Other Army-issued M1 Garand rifles were acquired for use by Marines from A Company 7th Marines and B Company Pioneer Battalion while fighting alongside Army reinforcements from the 164th Regiment (Americal Division) during the large-scale defensive operation to hold the 2500-yard Sector 3 on Guadalcanal. October 25, 1942. Despite repeated attempts by Japanese troops to penetrate this sector of the American front line, Marines and soldiers from the 164th Regiment successfully held. The Japanese Sendai Division was nearly decimated during this fighting.

According to Colonel Lewis “Chesty” Puller’s biographer, Mr. Burke Davis, Puller had no problem with the antics of his resourceful Marines, even though his personal opinion about which rifle was actually a better implement of war was made clear when he was quoted as saying, “For sheer accuracy if you want to kill men in battle, there has never been a rifle to equal the Springfield 1903. Others may give us more firepower, but in ability to hit a target nothing touches the old ’03. In my opinion nothing ever will. A perfect weapon if ever there was one.”

The widespread official adoption of the M1 Garand rifle for U.S. Marines took place after Guadalcanal when members of the 1st Marine Division were preparing for deployment into combat in Australia just before the invasion of Cape Glouster on New Britain.

An unsuccessful contender to replace the Garand rifle, the Johnson M1941 rifle was designed and built by Col. Melvin M. Johnson (USMCR). Probably fewer than 20,000 were built, most of those slated to go to the Dutch East Indies, but when the Dutch Indies fell to the Japanese, existing production of these rifles plus the companion M1941 Johnson Light Machinegun (see below) was appropriated by Uncle Sam for distribution to American and selected Allied forces. The U.S. Marine Corps was in need of a modern infantry rifle, and acquired some rifles from the Dutch East Indies production for issue to Paramarine battalions, then preparing to deploy to the Pacific. By all accounts, the M1941 Johnson performed acceptably in combat with the Marines, in the early days of the Pacific fighting.

As any design, the M1941 Johnson had strengths and weaknesses. It was not as accurate as the Springfield or Garand rifles, nor as drop-dead reliable as the Garand, as its recoil action was not as impervious to fouling by sand. Because the barrel recoiled, it was sensitive to extra weight, and the Johnson could only mount a “poke ’em not stroke ’em” type bayonet, and it could not launch rifle grenades. It did, however, feature a feed system that was superior to the Springfield or Garand, which was a rotary 10-shot magazine fed from 5-round stripper clips, which could be kept topped off with 5-round clips or single rounds. The barrel was removable, giving it a short profile for combat jumps. The Johnson rifle weighed 9.5 pounds, was 46 inches long, with a 22-inch barrel. Short-recoil operated, it had a multi-lug, rotating bolt that was the inspiration for the bolt on the M16 rifle. It had a tangent rear sight and a barleycorn front sight. Although of limited issue, it generally acquitted itself well in combat.