by Dave Bahde
in Exclusives
0

A few of us from the media were given the rare opportunity to get a truly up close and personal look at the FNH SCAR family. After several years of development and testing the SCAR has taken a big step forward. They’ve completed the “Milestone C” phase — that means the SCAR has now been tested and is ready for full production and implementation.

Jim Owens, a decorated Marine who served our country for over 23 years retiring as a Master Sergeant in the USMC was there to run us through our time on the range as well as answer any questions we had as it pertained to the entire SCAR family. Given his involvement in the design and implementation of this project it was a privilege. His knowledge and experience is unparalleled, especially as it pertains to the FN SCAR system. Why this system is so simple, practical and geared towards the actual operator became strikingly clear after a few minutes with Master Sergeant Owens.

We had the opportunity to shoot most everything in the SCAR line, including some cutting edge guns. Some very exiting things will be coming our way from FNH USA in the near future, and even more in the more distant future. The SCAR design, and especially the “Hammer” and SSR (Sniper Support Rifle) are true innovation at its best, and guns that will move our military and law enforcement into the future. 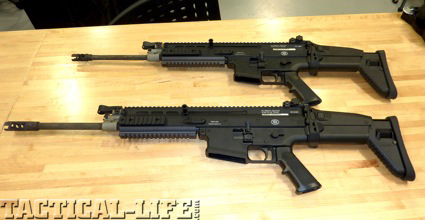 Seen side by side, here are the two commercially available SCAR rifles. The 16S above and the soon to be available 17S below. The similarities are evident, and they are even more evident on the range. The 17S is a 7.62x51mm variant of the system utilizing 20 round magazines. The heritage is present as the only real differences between the S models and those fielded with our military are the muzzle brake and fully automatic capability. They offer the same reliability, accuracy, and functionality as their military brethren. 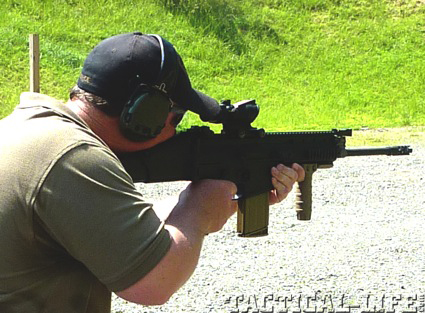 Shooting the 17S was a shear delight. In fact, it operated exactly like the SCAR 16 with just a bit more recoil. The trigger on the fully automatic version was just as controllable, again singles on full auto were a cinch. I’m looking forward to putting this rifle through its paces in an upcoming test. As expected, it proved reliable, controllable and very accurate. This may turn out to be a perfect choice for those police agencies in need of a patrol rifle in .308 caliber. 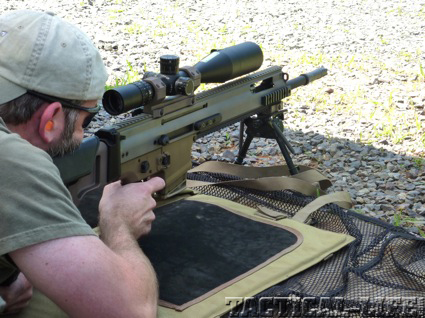 The SSR or Sniper Support Rifle is another evolution of the FNH SCAR project. Starting with a SCAR17 a longer barrel was added with greater support for accuracy. The rail was lengthened as well to support a full optic in combination with a standard PVS22 or PVS 27 Night Vision Scope. The trigger has been changed to provide a very clean and crisp trigger pull commensurate with a Designated Marksman’s Rifle. In coming months it will also be available with a two stage trigger for those of us with sginificant time behind the venerable M1A. 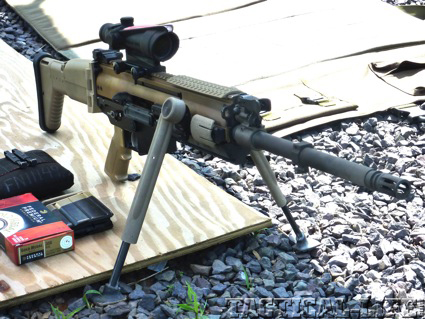 Having fired this gun at SHOT this year its accuracy at longer ranges is fantastic. There was no issue whacking the small steal plates at 400 yards. Limited to 100 yards this time, experienced shooters like Tom Beckstead were able to drop multiple targets quickly and easily. In final testing with SOCOM right now it will hit the commercial market at some point down the road (probably way down the road). I watched this rifle go through close to 1000 rounds at SHOT and never malfunction. Although much less ammunition was fired today, it still proved to be incredibly reliable. 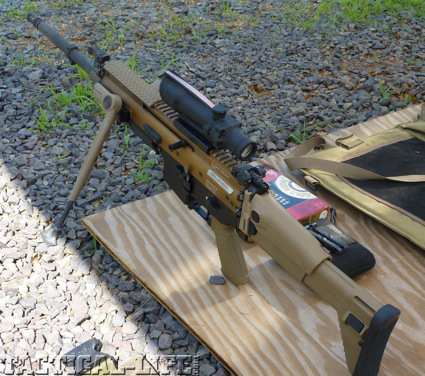