The Steyr AUG A3 SA USA is a bullpup design based on the original Steyr AUG dating back to the early 70s. Various versions of the AUG are in use by military, police and special operations units all over the world. AUG stands for Armee Universal Gewehr or in Yankee language, “universal army rifle.” The “SA” version of the A3 rendition of this weapon system designates it as semi-automatic only and unless you’re living on some other planet, you should be able to glean that USA means the rifle is intended for sale in the United States.

In case you’re unfamiliar with the term bullpup and how it relates to firearms, it is used to describe a firearm where the action and magazine are located behind the trigger. The primary advantage of this configuration is conservation of space. By incorporating the action in the buttstock the overall length of the rifle is reduced considerably. For example, the total length of a Steyr AUG with an 18.38-inch barrel (including flash hider) is only 28 inches, compared to about 36 inches for an AR with the same barrel length.

Another advantage of the AUG is that its operating handle is on the left side of the weapon, similar to a Heckler & Koch MP 5. This may not seem like a big deal but this permits the operator to manipulate the action with his non-firing hand while the rifle is still on his shoulder and shooting hand on the grip with finger poised over the trigger.

Gun Details
To black rifle aficionados familiar with the AR platform this rifle will seem radical to the point of extreme, and not just because of the bullpup design. A couple features bear mentioning. There is a vertical foregrip that can be folded up by pulling down on the grip and pushing it forward. The safety is large and positioned behind the trigger and directly opposite the opposing thumb. The magazine release is located under the buttstock, behind the magazine and is perfectly positioned so that you depress the release with the thumb of your left hand as you remove the magazine. The bolt release is on the left side of the buttstock, just above the magazine release. And as mentioned, the operating handle is also on the left side of the rifle and when fully retracted, the operating lever can be folded up, locking the bolt to the rear.

On top of the barrel there is a raised, 10-inch section of Picatinny rail and on the right side of the lower receiver there is another 2-inch section of rail for accessory mounting. Sling swivels are included on the right rear of the buttstock and just forward of the above-barrel Picatinny rail. The rear sling-swivel stud is integral to the disassembly process and when just partially depressed, allows for the removal of the buttpad for access to a cleaning kit, which is stored in the buttstock.

The rifle can be completely field stripped in a matter of seconds, but comes apart in a manner so bizarre you will question the process even as you’re doing it for the tenth time. With the exception of the barrel, none of the parts look like what you think they should. What really amazed me when I field stripped the rifle after firing 200 rounds was how incredibly clean all the internal parts were. There’s no question this is a radical design conceived by someone thinking outside the box.

The Steyr AUG A3 SA USA I was provided for testing came equipped with an Austrian made optic which is a genuine Steyr accessory that retails for $799.

It was a 1.5x14mm, tactical-style scope with a crosshair/circle reticle. Externally, the scope has a Picatinny rail on top for the mounting of additional accessories. Since this was the way the rifle was supplied, most of the shooting was conducted in this configuration. 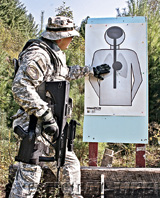 Shooting Impressions
Five different loads were tested from the bench at 50 yards and the average group size for all 15 groups fired was 1.37 inches. This may not seem all that impressive but keep two things in mind. For one, this is a combat weapon designed to shoot bad guys not prairie dogs and two; the coarse reticle and low magnification scope made precision shooting, even at 50 yards, tedious.

Like most tactical optics, the Steyr scope mounted directly to the Picatinny rail. The difference was in the screws used. These required a special wrench that is supplied with the rifle. I removed the Steyr scope and installed a Tactical Leupold Mark 4 MR/T 1.5-5x20mm with their SPR reticle. I then fired several more groups at 50 yards with a couple different loads. For those that are all wrapped up in accuracy, the thinner reticle and 5x magnification reduced group sizes, on average, by about a quarter of an inch.

Where the AUG really excelled was in fast action drills on targets between five and 50 yards, especially when multiple shots were fired at each target. The weapon was very controllable and I was able to double-tap targets with blinding speed and still get good hits. A SWAT officer who assisted in the testing was impressed with the speed at which multiple hits could be obtained too, especially when multiple targets were engaged. We both found the Steyr AUG to point naturally and be very controllable during sustained, rapid fire.

The assisting SWAT officer also liked the extreme compactness of the AUG commenting, “It would make a first rate entry weapon.” I agree, and think this the true forte of this weapon system. It’s compact and easy to control with the shooting hand and one of the few tactical type rifles with a barrel longer than 16 inches that will still permit the operator to use his off-hand to manipulate doors or deal with combatants or suspects while still keeping the rifle on shoulder and orientated at the threat.

During the testing, which involved firing 400 rounds of a variety of ammunitions; there were no malfunctions, period.

Final Notes
As far as I am concerned, there are only two downsides to the Steyr AUG being implemented in a law enforcement or military unit, or even used by a civilian. First is price; for the cost of one Steyr AUG a department could acquire several ARs. The bean counters and the tactical guys at each agency (you and your wife for tactical minded civilians) will have to weigh the benefits of the AUG to determine the worth of its purchase price. 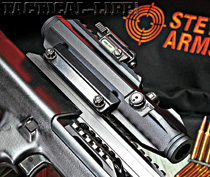 The second consideration would be the intense train-up required to bring team members up to speed on the weapon system. The Steyr AUG is unlike anything currently used by American law enforcement or military personnel, all of which are at least familiar or have an intimate relationship with AR platform. Someone without prior long gun experience would likely take to the Steyr AUG in a hurry but for those that already find the weapon craft of the AR second nature, there will be a steep learning curve.

For larger departments with good funding or for those that know how to work the federal grant system, cost may not be an issue. Just the same, departments that have dedicated 24/7 tactical officers or military units that can train as much as needed, will be less concerned about the transition from the AR, or whatever tactical rifle they currently issue, to the Steyr AUG.

What cannot be denied is that the Steyr is a reliable, tactical entry or combat weapon that, in the hands of a well-trained and skilled operator, would be a formidable force while serving a high-risk warrant, conducting a raid of a meth-house, during a hostage rescue situation or on the battlefield. For those same reasons it would be a good home defense firearm too. These are precisely the reasons some version of the Steyr AUG is being used in these type situations all over the world.