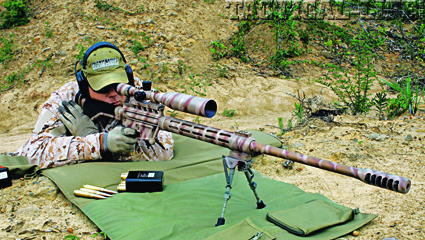 The author working with the Tactilite T-1 .50 BMG rifle package.

One of the big attractions of the AR platform is the fact that it is so modular. Simply push out the take-down and pivot pins and you can drop in a number of upper receivers. For instance, the .204 Ruger and 6.8 mm SPC are very popular caliber conversions for those that own stock .223 ARs. There are a number of drop-in .22 LR conversion kits that take only a minute or two to convert a 5.56mm rifle into a .22 rimfire money saver.

I recently mentioned to a friend that there was a new company making caliber conversion uppers for the AR. His response was, “.22 LR?” I had to chuckle a bit. Nope a little bigger, .50 BMG. Zel Custom Manufacturing of Odessa, Florida is now in full production of the Tactilite T-1 AR conversion uppers.

With the AR platform rifle so plentiful in the U.S. nearly every firearm and accessories manufacturer has parts for it. Numerous machine and tool companies that heretofore only made components are now making complete upper receivers that drop on to any AR lower.

Mike Brendzel has taken this trend a giant leap forward with the introduction of the T-1 .50 BMG upper receiver. As we should all realize, the lower receiver on an AR, the part with the serial number engraved, is the actual firearm. Everything else is merely a “part” or “component.” 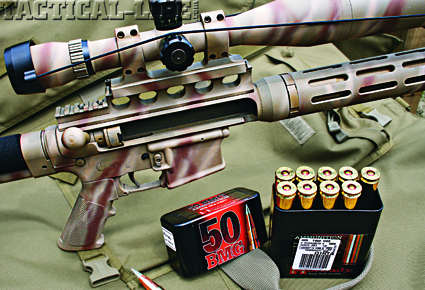 Note the single-shot, bolt action of the UltraLite .50.

Specifically, the T-1 upper receiver is a single-shot, bolt-action design. The upper receiver unit will fit on to any mil-spec, AR-style lower receiver. In order to ensure ignition of the large, hard primers on the .50 BMG cartridge, the end user needs to replace the stock hammer and spring of their AR lower with a heavy-duty hammer and spring from Zel Custom. Also, to make room for the massive bolt the buffer and buffer spring must be removed from the lower. The bolt slides back into the buffer tube when cycled.

Regarding manufacturer’s specs, the gun sent to me for testing was a package deal representative of the work that Zel Custom can do. The T-1 upper receiver was their UltraLite model with a 29-inch Mossberg barrel with 1:15-inch twist rifling. The chrome-moly barrel was button rifled and made of 4140 steel. Lothar-Walter barrels are available as an option but are naturally more expensive.

The handguard surrounding the barrel is free-floated. In order to address some of the shock or torque that the barrel must undergo they have installed what they are calling a “Bang Bushing” around the front. This offers a shock-absorber without putting pressure on the barrel.

On the business end of the barrel is a massive muzzle brake. When it comes to .50 BMG shoulder-fired rifles, the brake is not just a convenient accessory, it’s an absolute must. Firing a big .50 without a muzzle-brake is an invitation to a shattered clavicle. 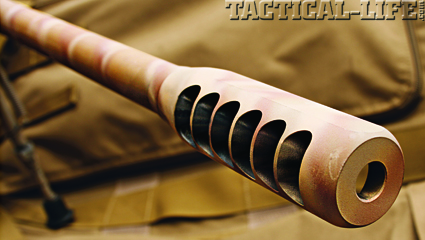 A massive muzzle brake is required to tame the beast

Overall length for the upper receiver is 43 inches and the weight of the unit without optics is 13.95 pounds. Zel Custom assembled the rifle with a Bushmaster XM-15 lower receiver. The stock is an Ace aluminum skelotonized version with a large Pachmayr butt-pad. There is a Picatinny scope rail riser directly above the action and a rail out front on the handguard and one below.

Additionally, the rifle arrived with a Bushnell 6500 scope and Harris bipod. Both the scope and bipod were affixed to the rifle with LaRue mounts. The entire package was coated with a CeraKote desert pattern finish prior to shipping.

You don’t just walk into your local hardware or discount store and buy .50 BMG ammunition. You have to special order it—my source for test fodder was Cabela’s. They had Hornady .50 ammo and Summit Ammunition in stock. Summit Ammunition manufacturers both standard FMJ and match-grade .50 BMG. Beware of imported, foreign surplus ammunition since quality control is iffy at best. The few dollars you save could cost you dearly when an over-pressure piece of ammo blows up your gun. 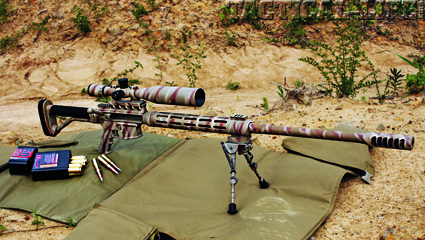 Fortunately for me, the scope on the UltraLite had been zeroed during the test firing before it arrived at Cook’s Gun Shop in Biloxi, Mississippi. That would save me some time. With the ammunition, rifle, and quality ear protection in hand I headed out to the range to begin my evaluation.

First up was the 661-grain full metal jacket ammunition. At 100 yards the rounds were impacting a couple inches low but dead on for windage. Next up was the Hornady 750-grain AMAX load. I went six clicks on elevation on the Bushnell scope and the first round went right into the 10 ring.

Last up was the 750-grain Lapua Bullex-N projectile. This monster is a solid bullet with a superior ballistic coefficient. I’ve tested this load in the past and found it to be tremendously accurate out of the .50-caliber cannon.

In addition to paper targets I engaged swinging steel plates. Down here on the gulf coast, we have a ship building industry and high-grade scrap steel can be had. The steel plates on the range are 1.75 inches thick and supported with anchor chain. 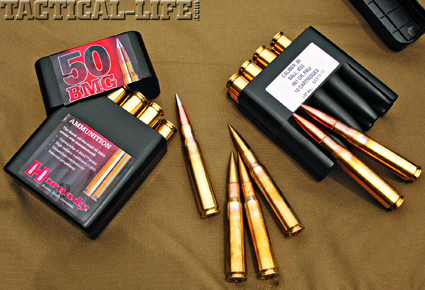 Out at 250 yards I held the crosshairs at the top of the plate. My first shot was about 2 inches right of center. The whack of bullet striking steel was notable. Moving out to 350 yards I again engaged a steel plate. This time I held the first Mil-Dot down in the center and the rounds struck home right where they should have.

As touched on earlier, the optic that I received with the test gun was Bushnell Model 6500 Elite. This optic was 4.5-30X variable power with a 30-mm tube and a 50-mm objective lens. The scope included external target knobs for windage and elevation and a side focus dial on the left side. The test version I received had an extended aluminum sunshade. The crosshair reticle featured in this optic was a mil-dot design. Naturally, the entire unit is waterproof, shock-resistant, and has an anti-fog coating on the lenses.

Having worked with a number of .50 BMG shoulder-fired rifles, I have some basis for comparison. The Tactilite T-1 functioned exactly as advertised. As for the action, the bolt operation was smooth and sure. I never experienced a failure to extract or eject. Regarding quality, the folks at Zel Custom put together a very solid, well-made upper receiver. All of the components were of the highest quality and craftsmanship. 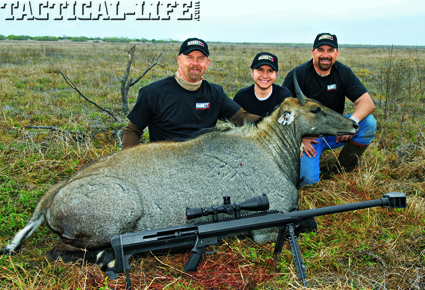 Now on to the question on everyone’s mind, what was the recoil like? Having fired both semi-automatic and bolt-action .50 BMG rifles, I would have to say that the felt recoil is not all that bad. Recently I worked with .300 Winchester Magnum tactical rifle and the felt recoil from it was more severe that the Tactilite T-1.
The biggest issue or concern a shooter will have is dealing with the massive gas discharge. That big .50 cartridge is burning a lot of powder and the propellant gas envelopes the shooter. Dust, dirt, and debris are blown all over the place. Of course the flying debris is lessened if you get up off of the ground and fire from a bench or other elevated position. You simply need to get used to the big boom. Did I mention double-hearing protection is a must? Yes, it really is.

Overall, the only area I found wanting was the trigger and that’s not really a Tactilite issue. The lower receiver has a mil-spec trigger which is fine for normal carbine/rifle work. However, when firing a scoped rifle you truly need the trigger to be a bit more smooth or crisp. 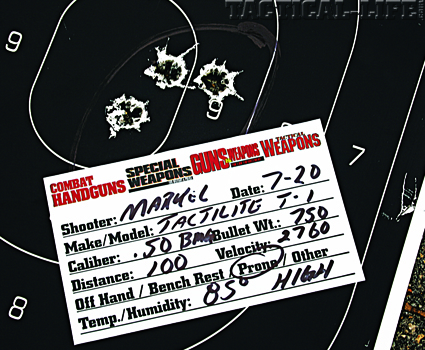 In the end I found that the Tactilite UltraLite package was indeed a unique diversion from the norm. The price tag for the UltraLite upper receiver is well below $2,000. Most single-shot, bolt-action rifles in the .50 BMG chambering start in the mid-$3,000 range and go up from there. So, if you have the .50-caliber itch you might just be able to scratch it for a lot less than you thought possible.

If you enjoyed this article, you can order your copy of The Complete AR Rifleman here. 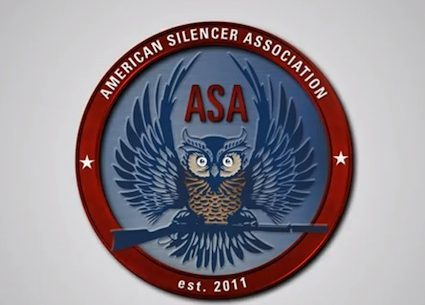 The American Silencer Association meets with ATF and Congress (video).

The author working with the Tactilite T-1 .50 BMG rifle package. One of the…