by Denis Prisbey
in Exclusives, Knives
0

The desert wars of recent years have contributed to certain law enforcement applications in the spillover of light-colored Desert Tan tools with tan or “Dark Earth” now offered as either a full-weapon camouflage finish on firearms or a partial “molded-in” feature in synthetic rifle stocks, pistol frames and knife handles and sheaths.

Aside from any camouflage value in sandy environments, tan offers another advantage. Black is a heat sponge. White is a reflector. Tan is more efficient in absorbing less heat than black while standing out less against darker backgrounds than white does. While few patrol or SWAT officers are likely to spend long hours outside under a burning desert sun, there are locales here in the US where summer temps do approach excruciating levels.

In circumstances where your blade may rest openly on your belt, or be set down temporarily and then picked up again, when you do need it you do not need a handful of heat. Böker USA, Glock and KA-BAR all cater to the desert market, and here are three blades for LE use. 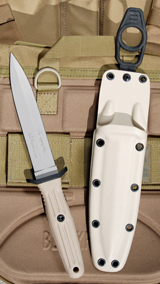 Böker A-F Desert Dagger
Böker USA is a German firm with a long history of quality blades and one designed primarily for use as a weapon is their A-F Desert fighting knife. A descendant of the Fairbairn-Sykes fighting knife of World War II fame, the updated Applegate-Fairbairn version addresses the weaknesses of the original.

The 9-ounce A-F’s 6-inch 440C double-edged stainless blade is wider than the classic F-S with a stronger tang join at the weighted tan Delrin handle and a beefier point to resist breakage in those two areas. The A-F also features a much heftier gripping area with longitudinal grooves for a non-rotating hold in the hand under slippery conditions and impacts. A thick blackened stainless steel crossguard angles forward on both sides, giving a comfortable and solid guard for the thumb to butt against no matter which way the blade’s oriented out of the sheath and six cross-grooves in the handle top and bottom just behind the guard increase the non-slip traction of the well-designed grip contours.

The tan Blade-Tech Kydex sheath fits a 2-inch belt with two-point “click-in” retention on the A-F’s guard for quick access during normal carry, bolstered by a stretchable black rubber tie-down over the pommel for more strenuous activity. Also useable for double-duty in more mundane cutting chores, each serialized A-F Desert displays the signatures of Rex Applegate and William E. Fairbairn etched on the no-glare grey bead blasted blade for $150. 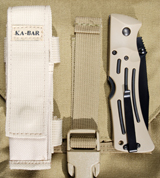 KA-BAR Desert Mule
Folding knives have developed radically since Grandpa’s little pen knife days, and KA-BAR’s brawny Desert Mule folder is built big for general use while still offering unobtrusive tip up pocket carry with a flat spring steel clip that can be attached for left or right side carry.

The lockback Mule’s 3.82-inch hollow ground black Teflon-coated AUS 8A stainless clip point blade opens one-handed via a thumb stud and provides very good control through the thumb serrations on the spine just behind that stud along with a shallow first-finger groove in the stainless liners and Zytel handle.

A recessed Boyes “dent” in the lock scallop avoids inadvertently releasing the blade under hard hand pressure while in use, and the folder is quite comfortable when choking up on the blade for fine work with the first finger ahead of the handle and the thumb extended well forward along the spine. A lanyard hole is included, and four elongated Kraton inserts in the handle scales add gripability, wet or dry.

At just under half a pound, the Desert Mule comes with a very secure tan nylon Velcro belt sheath that accommodates a 1.75-inch belt horizontally or a 2-inch belt vertically as an alternative to pocket carry. You also have the option of either a straight or a serrated edge for $67.