0
SHARES
27
VIEWS
Share on FacebookShare on Twitter
The removal of the two pins seen forward of the MRAD receiver allows the barrel of the MRAD to be changed in the field with hand tools.

Recognizing the huge tactical, logistical, psychological and political benefits of precise, long-range sniping beyond the 5.56/7.62mm NATO performance envelope, on January 15, 2009 SOCOM released its requirements for a new PSR. Among the demanding specifications include that the PSR must have a collapsible, folding or tool-less removable stock, no component longer than 40 inches and weigh less than 18 pounds with a loaded five-round magazine. Mil Std 1913 (Picatinny) rails are required and the barrel must be changeable by the operator within 20 minutes. There is no specified caliber but the precision of shot placement and accuracy requirements will be based on measurements taken at the operational range of tactical employment at 1500 meters. 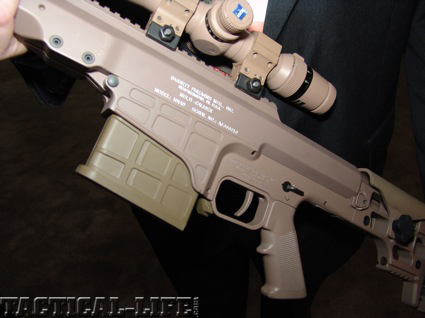 The use of polymers in the lower receiver and magazine resulted in a great savings in weight with no loss in strength.

The Barrett MRAD is based on the best attributes of the excellent Barrett 98B that include placing the shooter’s shoulder in linear alignment with the centerline axis of the bore, superior recoil management based on an excellent muzzle brake and polymer bolt guides that allow for smooth, lubricant independent, bolt operation. The Barrett 98B is 13.5 pounds empty, which with a loaded five-round magazine the MRAD is well under the 18-pound threshold stipulated by SOCOM for the PSR. 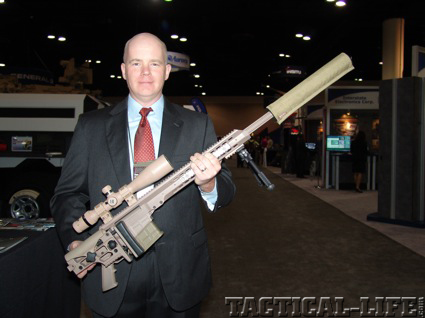 Barrett’s Kyle Lynch showing the MRAD that he has personally enjoyed shredding targets at 1700 meters with it sub-MOA accuracy.

The Barrett MRAD’s comfortable stock is horizontally and vertically adjustable, folds towards the ejection port and locks on bolt handle. The MRAD shooters will be able to easily change between 19 inch 7.62mm NATO, 24 to 26 inch .338 Lapua or .300 Win Mag barrels via two set screws. Each barrel can mount either a Barrett muzzle brake or a variety of suppressors. 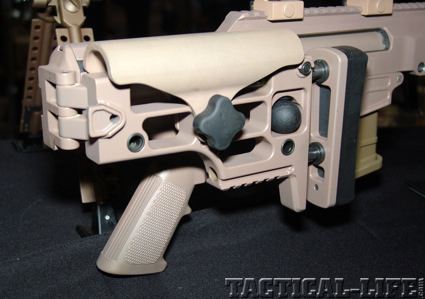 The MRAD’s folding stock is fully adjustable for length and pull, and snugly snaps on to the bolt handle for additional safety and ease of transport.

Shooting the MRAD have provided consistent accuracy results of ½ to 2/3 MOA performance with ten round groups of .338 Lapua. A Barrett shooter noted that the MRAD at the show had been shot out to 2140 meters to consistently hit on a half silhouette target. Starting cold with no dope, the shooter noted that it took “four shots to get on target then was able to place repeatable hits on the ½ mil target” (top half of a man) at over 2300 yards. He mentioned that the MRAD grouped so precisely at 1700 meters that it became “boring” to shoot! The MRAD shooting a well-designed bullet will dominate its battlespace because as legendary Marine Chesty Puller said “you got to hit em’ to hurt em’!”