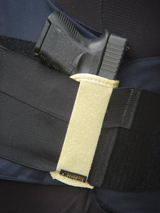 Redundancy sometimes carries with it a negative connotation, but when it comes to safety equipment, redundancy is a good thing. The Navy SEALs have a saying, “One equals none and two equals one.” That evokes Mr. Murphy’s rule to the effect that things will break or something will happen (batteries fail, things get lost, broken or taken away) and this will happen at the worst possible time. This is not acceptable for the soldier on the battlefield and it’s not acceptable for the modern law enforcement officer.

Unfortunately, in this day of large-capacity semi-auto pistols, the back-up gun is one redundancy that has been forgotten. The back-up gun was a sound idea when handguns had things called cylinders and held six rounds and it is still a smart officer-survival tactic. We’ll examine why and give you tips and tactics for back-up carry and deployment.

Back-up Pistols Through History
There’s a century-old phrase: “Beware the man with one gun. He probably knows how to use it.” What this means is from putting meat in the pot for food to defending his life, the man that has only one gun has to know how to use it—his life depends on it. But even old-west lawmen like William Hickock and Wyatt Earp often carried a brace of six-shooters. Some even carried a small hidden third pistol. When carrying a long gun while headed into trouble, they relied on a handgun for back-up.

In law enforcement, the officer-survival movement began in the wake of tragedies such as the 1963 abduction of L.A.P.D. Officers Karl Hettinger and Ian Campbell and Officer Campbell’s subsequent murder (memorialized by Joseph Wambaugh’s book The Onion Field) and the infamous 1970 Newhall shooting during which the well-armed criminal suspects murdered four valiant California Highway Patrol Officers. Many credit Pierce Brooks, one of the investigators on the Onion Field case, with starting the officer-survival movement. His book “…Officer Down, Code Three.” pointed us to a safer way of doing things; just like Officer Campbell’s tragic murder showed that some “Onion Field Insurance” (a back-up gun) was a sound concept. A back-up five- or six-shot revolver became known as a “New York” reload and proved faster than trying to reload a revolver.

But with the proliferation of semi-autos the practice of carrying a back-up has gone by the wayside. That needs to change. The GLOCK family of autopistols has proven itself utterly reliable as a primary handgun, but there are still valid reasons for carrying a second gun. GLOCK, as we will see, offers choices in that regard.

Why a Back-up Pistol?
Flash back to 2004—Charles Wright and several other young people steal a truck in Ohio and start driving to Florida. In Georgia, the Houston County Sheriff’s Department attempts to stop the truck for speeding. Suspect Wright refuses to pull over for Sergeant Chad Payne and a chase ensues, involving members of Houston County’s force as well as the Perry Police Department.

When Wright loses control of the pick-up and crashes, Sgt. Payne and Perry PD Sergeant Chris Sutcliff approach the vehicle with guns drawn. After seeing that the occupants are young people, one of whom is bleeding, and not knowing the truck is stolen, they re-holster and Sgt. Payne moves to obtain a first-aid kit.

Sgt. Sutcliff moves around to the driver’s side and as he approaches the driver’s door is shot by suspect Charles Wright. The shootout is caught on Sgt. Payne’s dashboard camera and the camera of Deputy Eric Barnett who arrives as the shootout begins. Perry Sgt. Chris Sutcliff is hit in the arm and knocked to his back (a second shot would narrowly miss his head). The shot and impact with the ground would cause Sutcliff to drop his pistol. As Sgt. Payne and Deputy Barnett return fire, Sgt. Sutcliff is able to roll into the woods nearby.

Sgt. Sutcliff, now unarmed, recalls his thoughts at the time, “I had visions of my wife at my funeral. Screw that! It’s not gonna happen!” Rolling into the woods, the wounded sergeant is able to escape but can do nothing more to influence the outcome of the confrontation.

The shootout continues with Deputy Barnett exchanging gunfire across and underneath the pick-up with suspect Charles Wright who, at one point, picks up the dropped duty pistol of Sgt. Sutcliff. Wright surrenders after being hit with several shots from Dep. Barnett.

After recovering from his wounds, Wright is now serving a lengthy prison sentence. The tape of the deadly confrontation serves as testament to never letting your guard down—as well as to the value of a back-up or second gun. In the absence of a back-up gun, if other officers had not focused the suspect’s attention on them by returning fire, Wright could have continued his deadly assault on the disarmed Sgt. Sutcliff. 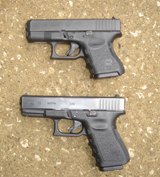 GLOCK Back-up Options
To provide a back-up for my GLOCK 19, I carry a Model 26. Rather than carry a small five-shot revolver, for about the same size, I can carry an 11-shot pistol that operates the same way as my primary carry pistol. This way, I have continuity of carry and am extremely familiar with the weapon system. That equates to increased accuracy. In a pinch, if my G19 is taken from me or goes down, the spare magazines fit in the Model 26.

Over the years I have experimented with all sorts of holsters to carry my back-up pistol. From ankle to calf and from pocket to vest carry, I’ve spent a considerable amount of money purchasing holsters. Quite honestly, I’ve never liked ankle or calf rigs. Modern policing involves frequent foot chases of criminal suspects. Who wants to worry about loosing your back-up piece? Pocket carry is an option but can make it difficult to draw smoothly.

I’ve settled on carrying the GLOCK 26 in an Uncle Mike’s holster designed to be worn on the straps of my concealable body armor. Beneath my uniform shirt, under my left arm, the GLOCK 26 is instantly available by unzipping my duty shirt and drawing the pistol from a shoulder holster. If my gun hand is somehow disabled, I can access the pistol with my left hand by drawing it in a fashion similar to a cavalry draw.

Training is vital to be able to get your back-up piece out and on target. Several years ago, an officer involved in a shootout forgot about drawing his second gun when his primary was taken from him because he had not practiced mentally and physically in this type of situation. A back-up pistol carried without the investment of practice draws and trigger time is not conducive to good performance under stress. You must practice drawing and firing your back-up to properly prepare. 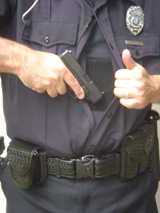 If your full-size duty pistol is the excellent .40 Model 22 or 23 you can carry the compact GLOCK 27 as back-up. If your agency issues the GLOCK 21 in .45, you can carry some “Onion Field” insurance with a Model 30 and 11 rounds of that same cartridge. Carry the .357 GLOCK 31? Why not carry a concealed back-up GLOCK 33? If your primary duty pistol is the Model 37 in .45 G.A.P. you could conceal a compact GLOCK 39 that carries six rounds in the magazine and one up the spout in case your primary is taken away or goes down. Finally, if your agency authorizes the 10mm Auto, you can match a full-size GLOCK 20 with a Model 29.

Of course if body type, ability to conceal or weight are factors, you can use a different caliber in your back-up than in your primary gun. All of the GLOCK pistols are worthy of serious consideration as second guns (and double as off-duty pistols as well).

Regardless of caliber, it’s wise to carry a compact GLOCK to back-up your full-size pistol. When you consider that you’ll be pulling that back-up pistol in a worst case scenario when your hands are shaking and you’re immersed in chaos, it only makes sense that it operates the same way as the primary pistol with which you’ve spent so much time practicing.

Back-up pistols or second guns are like fire extinguishers and other life-saving equipment. They sit there behind the glass (or in this case, rest in a holster) ready when needed. When dire situations arise, we can pull them from concealment to thwart a deadly attack. To adapt the common saying to a lethal threat, we can say, “In case of emergency. Pull GLOCK!” 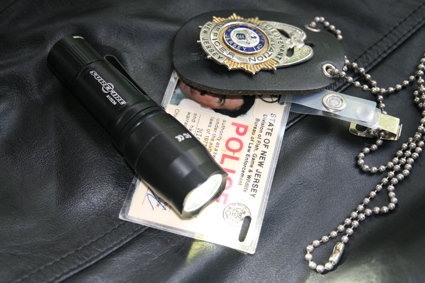 Redundancy sometimes carries with it a negative connotation, but when it comes to safety…