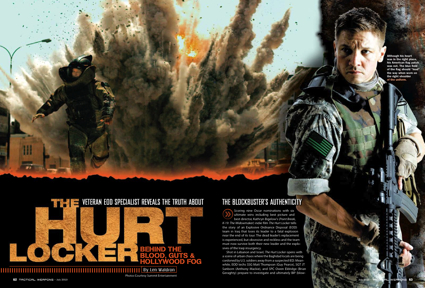 While Tactical Weapons readers can certainly appreciate a good story, each time Hollywood goes to war most of us are pained by technical accuracy questions floating in the back of our minds. And let’s face it, some films are much better than others, the worst being those rendered unwatchable when, for example, soldiers shouldering bolt action rifles continue to fire successive shots without a single cycle of the bolt or the dialogue sounds like kids playing Army on a playground. To this end, TW has asked CWO Jake Sturtz (Ret.), a Desert Shield/Storm veteran and EOD tech to comment on the accuracy of the various scenarios and techniques portrayed in The Hurt Locker.

TW: As for the technical and tactical details dealing with explosive devices, how accurately were they portrayed?

JS: The technical details were OK in some respects. I mentioned the bomb suit earlier. It would stop bullets strikes to some parts of the body but there were areas of weakness—the seams and areas where the panels overlapped when the tech was in a certain posture, for example. Mostly, it was designed to stop shrapnel and it did a fairly good job with that. It cannot stop an explosive’s concussion. The human body, particularly its organs, are mostly just bags of water. If a concussive wave hits a soldier with significant force, there is little that can be done to save him. Many concussion casualties will have no noticeable marks on them. The scene where James lifts his helmet and is bleeding from his nose and ears is an accurate depiction of being in a non-lethal explosion, even though he was wearing the bomb suit. Thompson’s death in the opening scene is as well.

TW: What are your thoughts on the EOD tactics the characters used in the story?

JS: Well, there were some significant differences. My experience was during the first Gulf War, but the fundamental principals have not changed all that much. Generally speaking, EOD techs are highly trained specialists on whom the Army has expended a great deal time and resources to prepare. As such, they typically do not roll out with a team of fewer than four, and never without Infantry support.

Further, our work required too much equipment to travel three in a single vehicle. All of the equipment had to be carried in bulky, static-free cases for safety reasons. It was typically two to a vehicle and the rest was equipment. While extreme circumstances may call for EOD members to pull security (such as in the film), that would be very rare. EOD teams are trained to have tunnel vision when it comes to dealing with explosives. The cost of failure is so brutally high, there is no room for anything else other than dealing with the task at hand. …be sure to read the of the feature article in the July 2010 issue of Tactical Weapons!