The STEYR AUG A3 SF

The Steyr AUG has proven popular with special operations units for myriad reasons. A bullpup design, it is as compact as a pistol-caliber SMG (sub-machine gun), yet packs the punch of the 5.56 NATO round. For personnel who parachute, rappel, employ small boats, or swim or climb to their AO (Area of Operations), compact is always better.

Another advantage of the AUG when it was initially adopted by many Special Ops units was the fact it had an optical sight when most other battle rifles still had iron sights. Admittedly, it was only 1.5X, but the circular reticle allowed very fast engagement at closer ranges. Later A2 versions of the AUG allow the carry handle/optical sight to be removed and a MIL STD 1913 rail to be used to mount a wide array of optics, and most Special Ops unit now use this version or the A3 which has just the 1913 rail.

The AUG’s versatility allows it to be tailored to the mission, which works for Special Ops units. The AUG A3 SF (a.k.a. A2 Commando Model) was especially designed for Austria’s Special Forces, the Jagdkommando, but has been adopted by other units as well. This model allows rails to be configured to take an array of optics, illuminators or pointers. For Special Operations use, the AUG with 13.8 inch barrel is popular, often with a suppressor mounted. 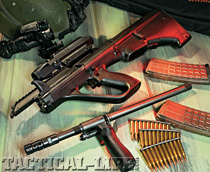 Made to Order
The ability to configure the AUG with various barrel lengths—13.8, 16, 20 or 24.4 inches—is very appealing. Generally, special ops units choose the 13.8- or 16-inch barrel versions, but for units operating where longer-range engagement is likely, the 20-inch barrel offers a good choice. Some units use the 16- or 20-inch version specifically for operators giving fire support from helicopters. The Austrian Jagdkommandos have very diverse missions, but since Alpine combat is one of them, longer range may be desirable. The 24.4-inch barreled version is actually the AUG LMG (Light Machine Gun), but at only 35.4 inches overall and 8.6 lbs, it makes a very portable Spec Ops support weapon—one which will take the same magazines as the rest of the unit’s AUGs. Well, actually, the 42-round magazine is standard for the LMG, while the 30-round magazine is standard for the carbine/rifle; however, some operators like 42-round magazines to have more firepower. I would note, however, that the 42 rounder makes going prone more difficult, always a consideration for Operators.

The AUG two-stage trigger selector system—in which a half pull is semi and a full pull is full auto—offers pros and cons for Special Operators. The advantage of this system is while patrolling if an ambush is encountered there is no need to work a selector switch. If the safety is off, all that is necessary is a full pull on the trigger to start sending 700 rounds-per-minute downrange. On the other hand, this system makes precise shooting in hostage situations more difficult as the trigger pull is not as smooth as on some other carbines. For Special Ops units, the AUG trigger system is normally less problematic than for conventional troops since operators tend to shoot a lot and get to know their weapons very well.

Some Special Ops units that employ the AUG either have 9mm conversion units or dedicated AUG 9MM or AUG A3 9MM XS. The XS version has a 12.8-inch barrel and Picatinny rail system. I have seen this version suppressed. The 9mm versions work well for MAT (Maritime Anti-Terrorism) and hostage rescue.

An interesting aspect of the AUG that has appealed to some units is the possibility of ordering the weapon with different colored stocks. Although either green or black is most commonly encountered, Middle Eastern Special Ops units have ordered AUGs in sand and some have been made in white for mountain and Arctic ops. In addition, many Special Ops units equip their AUGs with the Steyr 40mm UBGL (Under Barrel Grenade Launcher). 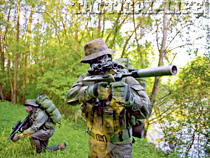 Utterly Adaptable
An advantage of the AUG is that it may be readily switched from right- to left-hand ejection and operation. However, because it is a bullpup design with the ejection port so far to the rear, the AUG does not lend itself well to firing off of the support shoulder around cover, a tactic that will throw hot brass into the operator’s face. This is one of the few criticisms I have heard consistently from operators who use the AUG.

An interesting comment on AUG applicability to Special Ops is that Special Ops units of most countries that issue the AUG as their standard weapon also use the AUG. This is often not the case as Special Operations units will choose a different weapon. There are exceptions; although Australian airborne personnel use the F88, the Australian-issue AUG, the Australian SASR (Special Air Service Regiment), 4th RAR (Royal Australian Regiment), Commando and Clearance Divers issue the C8 Carbine, the Canadian-produced version of the M4. Since these units work closely with U.S. Special Forces and SEALs and British Special Air Service and Special Boat Service, this keeps their weapons compatible. Note that the A3 AUG has the capability of being configured to take standard M16 magazines when units are working with NATO troops or others using the M16/M4.

Among Special Operations units that use the Steyr AUG, Austria’s Jagdkommando has already been mentioned. Another unit which uses the AUG is the Irish ARW (Army Ranger Wing), which is charged with all Special Ops tasks for the Irish Republic. Among other special units which have used the AUG are Philippine Scout Rangers, Argentinean Commandos, Indonesian Kopassus, Serbian 72nd Recon-Commando Battalion, and Croatian Special Forces. Many others special police or military units have some AUGs available.

A Unique Offering
The AUG’s bullpup design offers a lot of rifle in a SMG-sized package. For Operators who must carry enough equipment for recon or other extended missions, this is a boon. Once the operator is trained with the AUG, it is also a handy weapon which can be used quickly for CQC (Close Quarters Combat). Of the major bullpup designs, the AUG is the only one that has seen wide adoption by conventional troops and special operators. In service for over 30 years, it has been well proven.