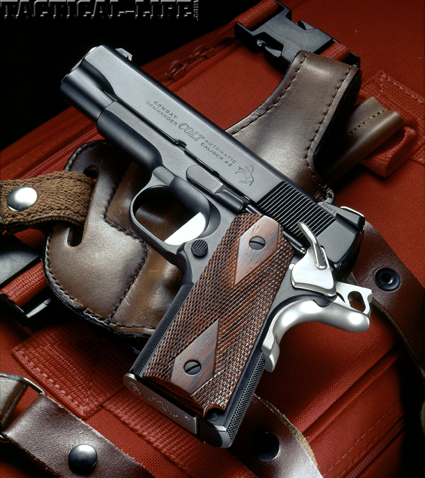 Adding to its personality, the 1911 is a kick-butt handgun that has a record of reliability from its inception. Browning submitted the 1911 to the U.S. Army’s Ordnance Department for testing and it went to the top of the class with a series of tests, which included the continuous firing of 6,000 rounds of ammunition.

It is believed that the U.S. Army wanted a large-caliber handgun to stop the highly motivated Moro tribe of warriors in the Philippines. The Moro were often unstoppable after being shot multiple times with U.S. Army issue revolvers, chambered for the .38 Long Colt. Using a combination of leather body binding, narcotics and religious rituals, the Moro put themselves into an altered state of consciousness as they prepared for battle. Simply stated, the .38 Long Colt was ineffective against the Moro. However, once fielded, the .45 and the 1911 met with immediate combat success.

Thirty years later, the 1911 made its way back to the Philippines in World War II, this time to face an equally fervent Japanese opponent. Special Agent Don Mihalek states, “The 1911 has a record of being the right tool for the right time. During the Pacific Theatre in World War II, members of the U.S. Military needed superior stopping power for zealots that had no fear of dying. The 1911, with its .45 round, has been proven time and again to be among the best handgun rounds. The 1911 is historic, but tough ergonomically. It is made for firing at an enemy that is ‘on top of you’ but is not as accurate at a distance as some of the more modern weapons. If you need a proven, tested firearm that does the job of stopping a close-range, deadly attack, 1911 is a good bet.”

Mihalek is dead-on with his assessment. Many members of the U.S. Military bet their lives on the 1911 in war after war, and they won.

Why change?
The Model 1911, in various models, is being made by a multitude of manufacturers throughout the world and still recognized by many combat professionals as the best combat handgun for personal protection. But if the 1911 is such a great combat handgun, why did the U.S. Army and other military branches go to the Beretta 92F (now the M9) in 9 Millimeter Parabellum?

The reason was more political than practical, since all other NATO troops use the 9 Millimeter Parabellum pistol cartridge and, as a member of NATO, we had to use the 9mm. This is similar to what parents ask most children, “If everyone jumps off a bridge, would you?” after the child tells them, “everyone else is doing it.” Monkey see, monkey do—and the U.S. Army jumped off that bridge, but it wasn’t their choice.

This isn’t Beretta bashing, since the Beretta 92F, and subsequent models, are high quality 9mm pistols for the military. Still, no other pistol has the proven 100-year-old combat record of the 1911 from the trenches of World War I to the deserts of the Middle East today. The U.S. military alone has purchased about 2.7 million 1911’s from its initial inception. Millions more were purchased by the American public, in addition to purchases by many foreign governments. 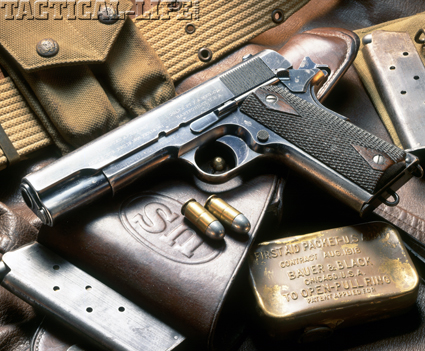 Very few changes have been made from the original Model 1911. The most significant occurred in 1983, when Colt introduced a new series of all their models. The biggest change was a firing pin safety that would not permit the pistol to fire unless the trigger was pulled to the end of its travel. It was thought that this additional safety feature was necessary in order to reduce lawsuits in our litigious society, and obviously to appease many anti-gun advocates.

Competition usually brings about a better product, but is that better product appropriate to satisfy all needs? Can one handgun do-it-all? The answer is obvious – NO!

Although designed for military use, the 1911 and its clones may also be of service to modern law enforcement. The adoption and use would primarily be for specialized units, such as SWAT teams and similar tactical units. The carry and use of the 1911 by uniformed officers is relatively rare, as the most popular .45 ACP carried by uniformed officers today is believed to be the Glock 21.

Renewed Appreciation and Advocacy
Harvey Hedden, executive director of the International Law Enforcement Educators and Trainers Association (ILEETA) and a 30-plus year Wisconsin law enforcement veteran, states, “The model 1911 has survived with relatively modest changes to its design and is today enjoying a renewed popularity, particularly with law enforcement tactical teams. Like the AR-15/M4, it seems as though almost every gun manufacturer is making a 1911-type handgun, and many tactical teams are lobbying their agencies to adopt this weapon for their members.”

One of the primary factors favoring the 1911 for tactical applications is the .45 ACP cartridge. The mass and diameter of the round contribute greatly to its proven reputation as a fightstopper. The 1911-type pistol has a rugged design, since it was originally designed for the military. It provides the shooter with a low bore axis relative to the grip, aiding in recovery from recoil. It can be equipped with an excellent trigger for precision shooting with much less creep and overtravel than double-action semiautomatics. It is also capable of great accuracy and many models come with an optional rail for lighting devices.

Hedden adds, “The opportunity for a long-range pistol engagement is rare in law enforcement, and especially rare in tactical operations. It is also true that accuracy is a more important factor than caliber in the effectiveness of a handgun. Most duty handguns will shoot with decent accuracy for the shooter within 25 yards—that is, with proper training.”

If caliber is the prime concern, almost every manufacturer of a 9mm or .40 S&W handgun now offers a .45 ACP of similar design. The steel frame 1911 weighs almost a pound heavier than a .45 ACP Glock 21, which has a substantial ammunition capacity advantage over the 1911. With all the other gear a tactical team member is expected to carry, weight may be an important consideration. The single-action trigger and slide safety are very different than that of the typical duty pistol. If the 1911 is authorized, training will be less complicated if it is the only system that the officer uses, for both on-duty and off-duty carry. This single system is imperative in order to reduce confusion under stress, which can cost the lives of police officers.

Chief Jeff Chudwin, of the Chicago suburb of Olympia Fields, is a former prosecutor and president of the Illinois Tactical Officers Association. Chief Chudwin states, “The 1911 is more complex than other systems in terms of upkeep and parts replacement. In the years I have used my 1911’s in duty use and competition, I have broken seven extractors. These are not simple drop in parts like a Glock extractor and must be fitted by a competent armorer/gunsmith. My pistols are modified by master gunsmith Ned Chrisitansen of Michi-guns, who insures the functionality and reliability by testing all parts and altering the frame size to fit my hand as I want it.”

Chief Chudwin offers, “Bottomline, the 1911 offers a platform that can be developed for any shooter’s hand size and is among the most reliable and accurate duty pistols when set up by a knowledgeable gunsmith. If you want inexpensive, look elsewhere. If you want the best, the 1911 will stand up to any test.”

Sergeant Brian Stover of the Los Angeles Sheriff’s Office states, “The term ‘toughest’ is hard to describe. When it comes to a long-lasting, excellent design that has withstood the test of time, Colt hit the mark (pun intended) with the 1911. I wonder if some of the more modern handgun designs will still be as highly sought 100 years from now. To truly last as long it has without a major redesign is a testament to the skill and foreknowledge that went into the original. An unmodified Model 1911 straight out of the box is a formidable weapon that will get the job done. Modifications and enhancements have only made a great gun a more efficient fighting tool.”

“The 1911 is formidable in both appearance and function,” states Deputy Chief Ray Cordell of the Barrington, IL Police Department. Chief Cordell adds, “The fact that the 1911 has lasted through the decades is a testament to its durability and performance. Its use requires the most dangerous weapon an officer has, his brain. To carry a ‘cocked and locked’ 1911, you must have your head screwed on straight and be dedicated to practice, practice, and more practice.”

Even though the 1911 is not widely carried for law enforcement duties, it still has some very loyal fans. Chief Bill Harvey of the Ephrata, PA Police Department states, “I was issued a 1911 in 1977 when I was in the US Army Military Police Corp. I carried one ever since for off-duty and personal defense. I also carried my 1911 style Kimber while on-duty and off-duty at a prior police department. It has been a handgun love affair ever since.” 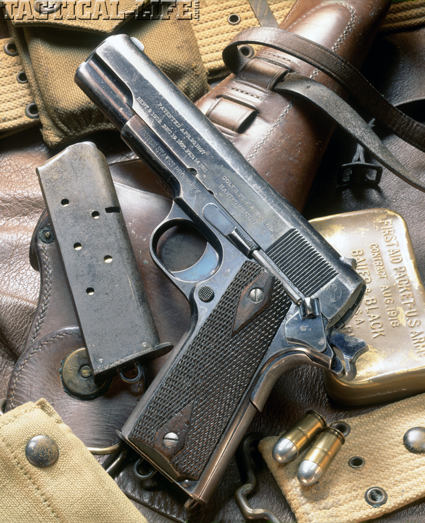 The Eye of the Beholder
The 1911 can be customized with various special modifications from a few hundred dollars to over $5,000. Certain customization may be great for competitive shooting, but with very close tolerances, it may not be the right choice as a personal carry self-defense handgun for everyday use. The close, precision tolerances may clog with just a little bit of dirt or other matter, which may prohibit the customized 1911 from operating properly in a combat firing situation, presenting deadly consequences for the operator rather than the adversary.

There may be some who believe that the 1911 is not a good choice for a combat handgun, and that’s their prerogative. Like the 1911 or not, you can’t help but love the .45 ACP as a manstopper. Whether fired from a 1911 or a Glock 21, the .45.ACP has a proven record for 100 years. We can all thank John Browning for that.

Remember, bullet expansion upon hitting a human being cannot be relied upon for each and every shot. But a .45 fully jacketed bullet still leaves one hell’uva large hole even without bullet expansion, meaning that a 230-grain .45 ACP ball ammo works well as a manstopper.

Chief Cordell adds, “From battlefield to personal defense on the street, this weapon has stood the test of time. It is a simple operation and a reliable tool. It takes abuse and it might not look as pretty as when it came out of the box, but it does its job reliably and with precision. What more could you ask of a handgun?”

History is the best critic, and the 1911 has a proud and 100-year legacy on its side. I’d bet that avid combat shooters will discuss the 1911 after 200 years—too bad none of us will be around to hear it! 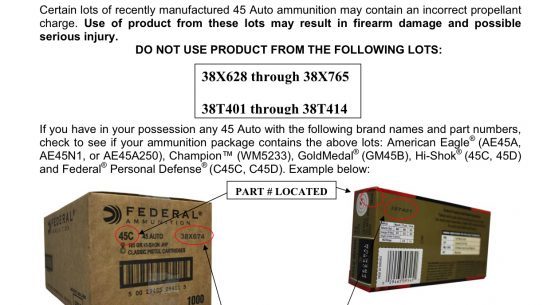