Many readers may already be familiar with the Austrian AUG rifle (Armee Universal Gewehr, or universal army rifle). However, many may not yet know about the new and improved Steyr AUG-A3, a weapon manufactured in the U.S., thereby avoiding the import restrictions placed on foreign weapons.

The Steyr AUG is an Austrian bullpup 5.56mm assault rifle, designed by Steyr Mannlicher GmbH & Co, formerly of the Steyr-Daimler-Puch conglomerate. The AUG was adopted by the Austrian Army as the StG 77 (Sturmgewehr 77) in 1977, replacing the much older and heavier StG 58. 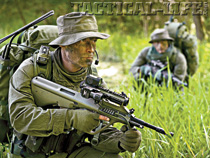 The rifle has been a tremendous commercial success, adopted by the armed forces of more than 35 countries. Germany acquired the AUG for their Spezialeinsatzkommando, while the Australian Defense Force chose it for their primary rifle. Additionally, New Zealand, Bolivia, Ecuador, Ireland, Luxembourg, Saudi Arabia, Tunisia, Oman—even the U.S. Immigration and Customs Enforcement agency—among others, use the weapon in some capacity.

In the 1980s, the AUG was gaining market share within the new Tactical Match niche and 3-Gun competitions. King at the time was the AR-15 HBAR with an ACOG or COLT 4X scope. Yet, the Steyr is a more compact, reliable and accurate rifle. Its integrated sight went a step beyond anything on the market back then and the quick-change barrel was also advanced. Most notable, however, was how stable and controllable it felt with its bullpup configuration. I was one of the shooters that fell in love with it, buying the AUG and leaving my AR-15.

I shot 3-Gun matches and the 3-Gun World Championships of those days, and in every competition I noticed more and more AUGs would show up. It was just a better shooting machine, though not without flaws. The trigger has a rather hard and spongy feel, but overall it’s a better-shooting rifle.
In 1989, the AUG’s hegemony faded as the Steyr AUG was banned from further importation into the United States. This obstacle gave back the throne to the AR-15 and its clones, while AUGs that had been already imported became collector items and most of them never shot competitively again. High prices on the few AUGs out there made the shooters go back to their AR-15s, which seemed “nice enough after all.” Selling in the $3,000 to $5,000 range, most AUGs were collector’s items—including mine.

Making It
Nearly a decade later, the Steyr AUG was to return to the U.S. with some changes. In 1997 Steyr joined forces with GSI to import a legal variant of the AUG in accordance with the 1989 Assault Weapons Ban as well as the 1994 Crime Bill. Steyr’s solution was very simple: Remove the military features so that it was in compliance. But as Steyr began the BATF importation application process, little did they know of an ongoing battle in the White House and the US Congress.

After years of political wrangling, Steyr decided to take a bold step and establish manufacturing in the U.S. While a logical solution to the import ban, it was not to be an easy task. The first try was a rather unsuccessful effort that ended up with new management in Steyr U.S. and a U.S. company manufacturing AUG clones. Steyr Mannlicher USA tried again in 2007 with collaborative effort from Sabre-Defence, and from this second effort U.S. shooters have been given the AUG–A3. Made in the U.S. by Sabre-Defence in its state-of-the-art facility, with the quality everybody expects from Austrian tradition.

The AUG-A3 comes standard with two 30 round magazines, soft carry case, factory AUG sling and cleaning kit that fits conveniently in the butt stock. The AUG-A3 is Steyr’s answer to the “Picatinny craze” that is taking the tactical market by storm. Austrian designers are very minimalistic, adding the option of attaching rails at various positions—even some at 45 degress. If you don’t need them you can take them out and the rifle will still have a smooth, round and “light” feel, instead of the “thick” feeling you get with many M4-style clones.

The 45-degree Picatinny positions are an important feature, as I like to place my Aimpoint Micro sight there and leave the top rail for a scope with higher magnification. I learned this trick from today´s top 3-gun competitors: Angle your gun and use the side of the gun and the barrel, plus the red dot Aimpoint Micro, as though it were a shotgun. Target acquisition will be incredibly quick and your point of impact won’t be affected much at close range by the repositioning. You will have the best of both worlds—a long range semi-sniping capability and a swift close-quarters target acquisition.

The top rail is long enough to fit a high magnification sniper scope with an inline night vision device up front or any new thermal imaging device shooters might want to use.  Having the target ID capability of a high magnification scope may be required in many operations, and the AUG-A3 allows for swapping out the 1.5X sight and attaching a high power scope in no time. Meanwhile, there are the side and 45-degree rails should there be a need to attach a light source as well. The AUG-A3 comes with the 1.5X-14mm high-quality Steyr “Austrian scope,” similar in design to the Leupold CQ/T. It has superb optical performance, and it sports a Picatinny rail on its top for additional accessories.

The AUG was the first gun I’ve used that offered a front grab handle as part of the barrel. Whether it’s the precision machining or that famous central European watch making tradition, the rifle is machine gun quick and will accurately hold zero with different barrels after a barrel change. 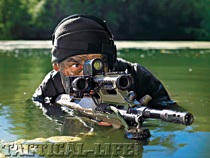 The standard AUG-A3 SA is the 16” “carbine” version, while four other barrel lengths are available in the market: The longer semi-sniper is 20”, the 18”, the “carbine” barrel at 16” long and the smallest of them all being the “compact” barrel at 14.5” long (for military and law enforcement only). Each barrel has eight lugs that lock into a steel insert in the alloy receiver.

Steyr has always been synonymous with accuracy and this one is no different. Years ago I shot incredible groups with my old AUG and the new Sabre-Defence barrels are certainly on par. With the small 16” barrel you can expect average ten shot groups of 1.5 minute of arc (MOA) at 100 yards with most ammunition, (tested after 10,000 rounds). And if you are into precision shooting, try the Federal Gold Medal 69-grain match ammo, bound to bring a smile with the 1 MOA ten-shot groups. From a chrome-lined military spec 16” barrel, you won’t get much more anywhere else.

American Cousin
The U.S. AUG has its differences with the Austrian units, but its fundamentally superb specs remain untouched. The Steyr AUG is a gas-operated, magazine-fed rifle of bullpup layout and ambidextrous capability. It’s built around a cast aluminum receiver with steel reinforcement inserts. The gas system is regulated and adjustable and the very distinctive stock is built from fiberglass reinforced polyamide.

Somewhat unique to the weapon is the fact that there’s no separate fire mode selector on the AUG rifles. Instead, the trigger itself is used to control the rate of fire. Pulling it half the way back will produce single shots, while pulling it fully will produce fully automatic bursts on full-auto versions. 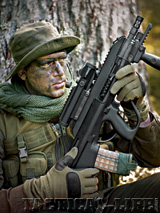 The enlarged polymer trigger guard encloses the trigger hand and allows the gun to be fired with gloves or mitts on. The trigger has improved over the years, but even though it is still hard and less responsive, it is no worse than other assault rifle designs. While there is no major fault with the AUG trigger, considering Austrian quest for perfection I would prefer a more conventional one with lighter pull.

The magazines are clear polymer available in 30- and 42-round capacity. I’ve had many and never did one fail on me, even back in 1989 when STANAG magazines where aluminum and prone to failure.

The Steyr AUG-A3 is one of the best tactical rifles/carbines available. It will be a best-seller in a tactical market so full of M4-style clones, all too similar. This is a superb rifle; accurate, configurable and incredibly cool. Yes, coolness is a factor nowadays, more important that most would ever admit.