0
SHARES
51
VIEWS
Share on FacebookShare on Twitter
To ensure shooter safety and control barrel orientation, some of the events had the competitors engage their targets through designated firing ports as this Garden City competitor shows. 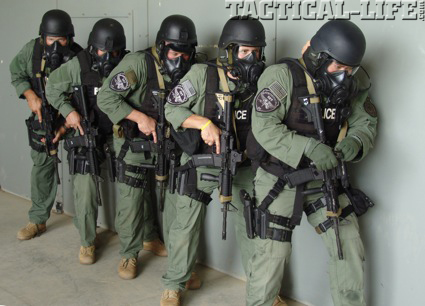 The FT Riley Police SRT stacks prior to entry into the Avon Barricaded Gunman event. The first man is preparing the flash bang distraction grenade to be tossed after the door is breached by another officer with a ram.

The annual USNSC was again hosted by the United States Shooting Academy and the Tulsa, Oklahoma Sheriff’s Office. The full week of competition started with a two day Sniper competition, narrowly won by Bruce Power of Canada, followed by the three day SWAT Championship was headed by Dr. Jack O’Conner and run by a team of devious ex-SWAT and LEOs who plan and construct the excruciatingly difficult stages. Each event is designed by Rick Porter and T.J. Pilling to thoroughly challenge each shooter with brutally realistic scenarios complicated by distractions of heat (which everybody experienced), physical exertion and time stress to place shooters outside their comfort zones. The challenging events for USNSC included the following:

– The 5.11 Tactical Officer Rescue started with a team member becoming a simulated casualty as the rest of the team negotiated almost 300 meters of obstacles to engage targets and then extract the wounded officer all the way back to the finish line. This was as tough as the clothes of the stage sponsor, the respected tactical clothier, 5.11.

– The Avon Barricaded Gunman started with a flash bang distraction device, the team forced a dynamic entry to an unknown structure. They engaged targets and located, cuffed and carried a dummy perp to the finish line while wearing the Avon FM53 respirators and Tactical Command Industries comms.

– The First Choice Armor Vehicle Assault started with precision fire, the remainder of the team had to maneuver and engage poppers, plates and clays using personal First Choice shields for cover and protection.

– The MGM Multi-Gun Shootout event had each team running and clearing obstacles to clean plates, topple poppers and break clay targets with their pistols, carbines, precision rifles and shotguns.

– The Patriot Ordinance Factory Carbine Crunch had each team overcome obstacles engage carbine targets and stack their team members to have a shooter to finish the relay by hitting targets from the top of the ten foot wall. Each chose different methods but every one showed that teamwork sometimes means working very closely together.

– The GLOCK Pistol Relay had each team engage steel targets with sidearms while passing off an unwieldy and heavy bag that could not be dropped or set down all while wearing protective Avon FM53 masks.

– The DAW Tech Hostage Rescue tested each team’s ability to use a mobile DAW Tech Bunker for protection while moving to engage multiple targets with their pistols and carbines.

– The TASER Team Takedown challenged officers to engage targets with the TASER X26 and TASER XRep shotgun rounds as well as making hits on clay and steel with carbines, pistols and shotguns. 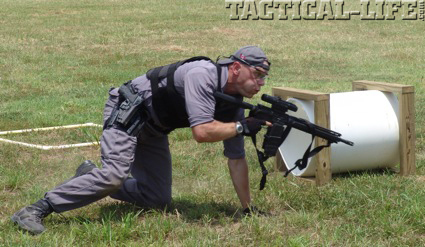 To replicate real-life where not every shot is from a comfortable position, part of the First choice Armor Vehicle Assault was engaging distant targets from low, but not a prone position forcing the competitors to scramble like this Bruce Power shooter.

Reflecting real life, the officers lost points for missed shots, dropped gear, any weapons safety violations or dropping the 165 pound dummy! Just like on the street an during call-outs, officers experienced the frustration of unexpected weapon jams, misfeeds and electronic sights that failed or went out of zero that cost time and tested the training of the competitor and tactical preparedness of the team. 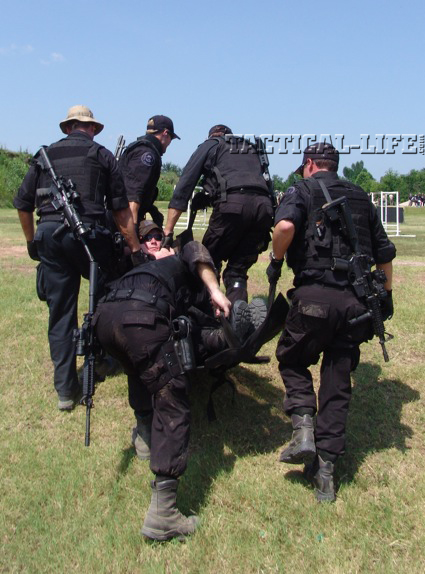 The Germantown Police SWAT was challenged to get their simulated casualty back to the finish line using a tactical litter during the Tactical Officer Rescue event sponsored by 5.11. 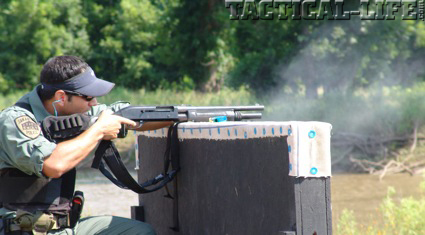 The San Antonio SWAT team showed their mastery of all their weapons including the workhorse 12 gauge shotgun.

The competition results showed an unprecedented dominance by one team that took first place in EVERY individual event and won the overall championship! The defending Canadian champs, the Nuclear Response Team that protects the Candu Reactors and 4,000 employees of Bruce Power took first place again with excellent performance that swept the field and loaded the team down with trophies! However, the “one prize rule” ensured that almost all the teams walked away with something from the lavish prize table. In addition the highest scoring American team would be invited to the exclusive, invitation-only 2011 Counter Terror Competition in Europe. That honor went to San Antonio, Texas SWAT who will be the first civilian law enforcement team to ever compete in the GSG-9 CTC. La Plata County Colorado was the On-Call Champion (4th place overall) and Oklahoma County won the Oklahoma Cup. The quality of the competition teams was evident with just 10 points difference between second and sixth place. 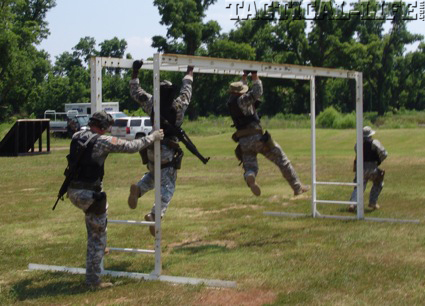 The overhead parallel bars that the teams had to negotiate during the Patriot Ordinance Factory Carbine Crunch look easy, almost fun until you factor in the heat and the added weight each competitor is carrying. More than a few competitors failed to make it across, accepting the penalty points instead. 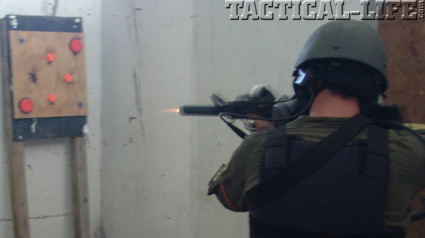 During the Barricaded Gunman event the competitors engaged two-inch clays with their pistols and carbines in the CQB house. They found that sighting their carbine was radically different because of wearing the respirator.

The whole week and especially the evening of the championship dinner was full of honest comradery and selflessness. The extent of which was noted by many competitors and observers to be distinctly remarkable. As an example, Levi, one of the hardest working “red shirts” working to keep the range running flawlessly, was awarded a GLOCK for his efforts by Dr. Jack. With absolutely no hesitation, he accepted the gift and immediately re-awarded it to another “red shirt” that had assisted him.

In addition, as they did last year, Bruce Power, in a display of their character, and sportsmanship, passed their winning stage prizes to other competing teams. That pretty much typified the event where the prizes were secondary to the recognition of the duty, sacrifice and effort that was the root of the purpose of the event and outstanding men and women that risk their lives daily. It is a great competition with great teams and incredible people. I was proud to be there. 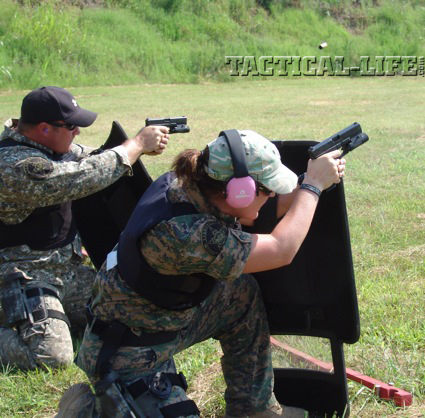 This was the first time the Chickasaw Nation Lighthorse PD SWAT competed at the USNSC, and did well with the complex and challenging events like the Vehicle Assault. 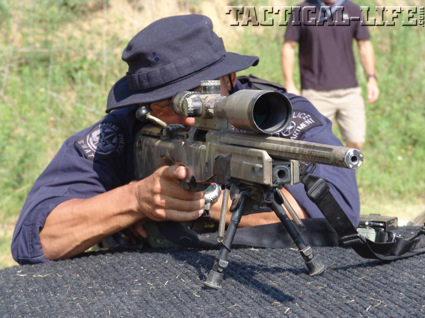 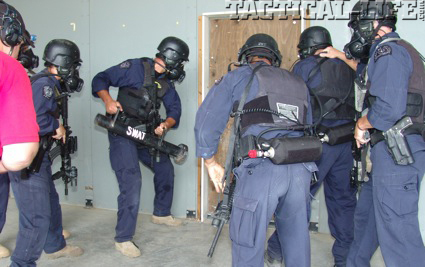 The well-practiced and smooth Dallas SWAT entry team prepares to start the Barricaded Gunman event with a fast, dynamic entry. 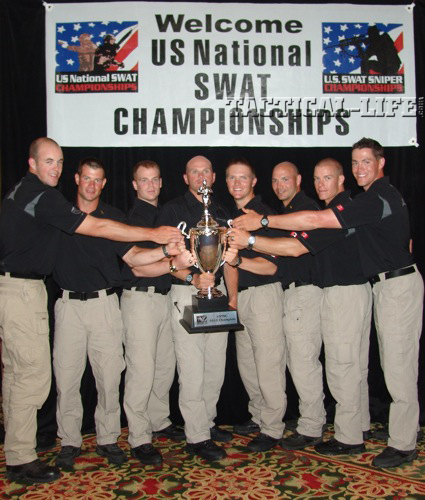 The perfect Canadian team; for the first time in the history of the USNSC, won every individual event and the overall championship by an unbeatable margin. 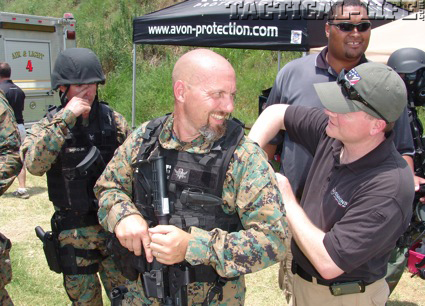 Avon and Tactical Communications geared up each team, like the Lighthorse PD SWAT shown here, before the Barricaded Gunman event. The FM53 respirator with its integral radio allowed the competitors the ability to move, shoot and talk in a simulated contaminated atmosphere. 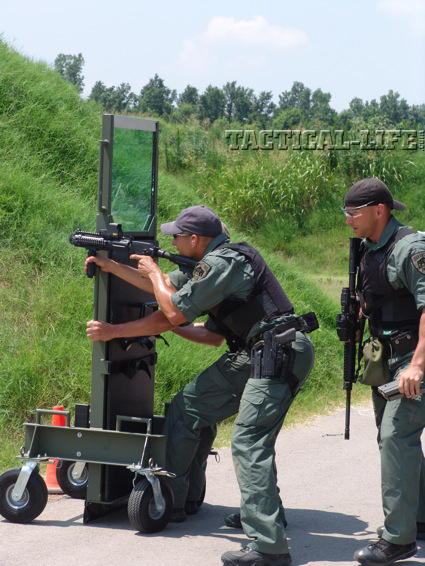 The 37mm launcher is a rarely used, but a very important part of a SWAT officer’s toolbox. Each officer had to hit a six inch steel target with one shot from the big bore launcher during the DAW Tech Hostage Rescue event. 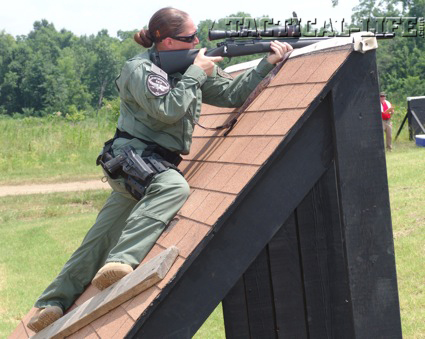 Sierra Cross from the Ft. Riley SWAT engages targets from the US Shooting Academy’s half-roof barricade. 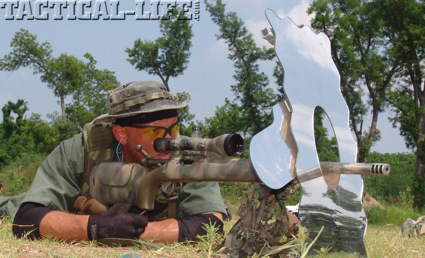 Using a mirrored barricade to ensure safe barrel orientation during the Carbine Crunch, the team sniper waits to engage a target that if successful stopped the time and saved his team from a long run through barricades to the finish line. 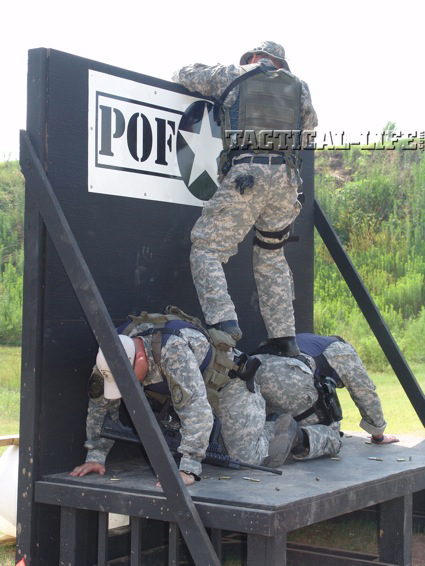 During the Patriot Ordnance Factory Carbine Crunch, each team had to stack vertically to provide a stable support to allow one shooter to engage specific targets from the top of a ten foot wall. 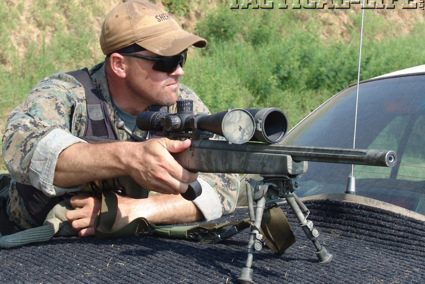 Getting ready for the initiation of the Vehicle Assault event, each sniper set up their precision fire rifle over the hood of a squad. 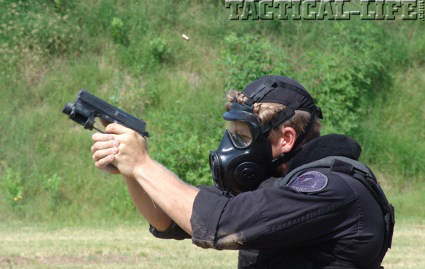 The competitors learned that wearing a respirator changes vision, breathing and the ability to perform simple tasks like a fast reload in their lifesaving Avon FM53 masks. 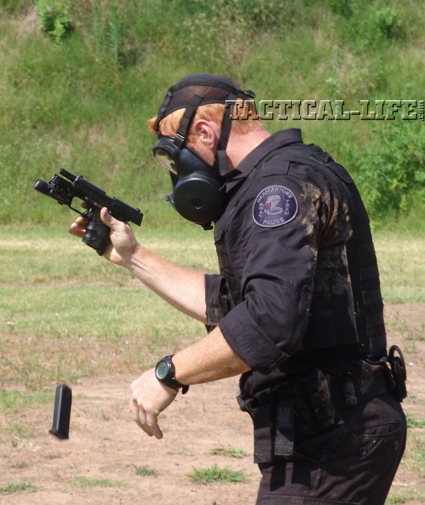 The Germantown team competed well during the GLOCK Pistol Relay event; here one of their team dumps a mag for a speedy tactical reload prior to relocating. 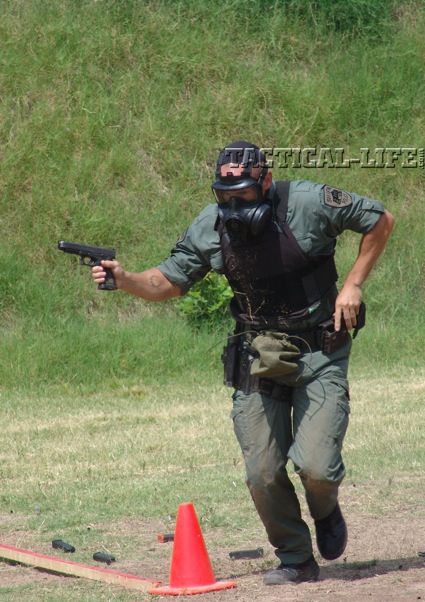 Range safety is always in play during the competition; here an experienced competitor ensures his weapon remains pointed down range as he moves forward to the next stage of the GLOCK Pistol Relay event. 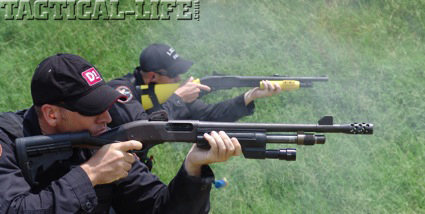 Some of the duty scatterguns used during the competition were breacher shotguns like the one shown here. 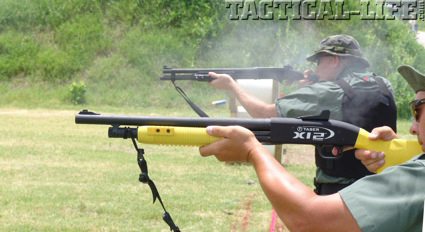 The TASER X12 was shot from the dedicated shotgun provided by TASER but can be fired from any 12 gauge with shocking results.