THEY WERE NOT EXPENDABLE

The air will be alive with the sound and fury of full-auto fire as Expendables 2 explodes into multiplexes this August 17th. For this Lions Gate release, Sylvester “Sly” Stallone has again amassed a roster of current stars like Jason Statham and Jet Li, and teamed them up with 1980s action favorites including Dolph Lundgren, Arnold Schwarzenegger, Bruce Willis, Jean Claude Van Damme and yes, even Chuck Norris will make an appearance. This may set the record for most guys I know in one film!

Like the first film, this sequel to the hit The Expendables features a miasma of weapons ranging from the HK UMP .45 SMG used by Dolph to the Barrett M107 fired by Thor’s little brother Liam Hemsworth and, of course, the AA-12 assault shotgun hefted by the massive Terry Crews. But upfront and personal is the pair of Kimber .45 ACP 1911s carried by Stallone’s hero Barney Ross. How the guns we see in movies get chosen is the subject of a whole other article, but how did these ornately gripped Kimbers become Sly’s go-to pistols? 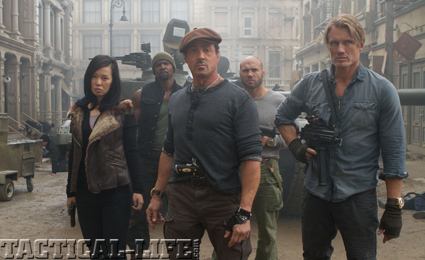 It all started on the first Expendables when the film’s armorer Kent Johnson contacted Kimber about using their Gold Combat II .45. Kimber jumped at the chance to have their pistols, with the distinct Kimber logo on the slide, featured so prominently in a major Hollywood film. 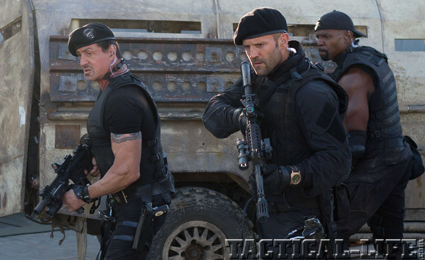 Sly then asked legendary knifemaker Gil Hibben, who had made the survival Bowie knife for 1988’s Rambo 3 and the machete-style blade used by Sly in 2006’s Rambo, to make him some knives for the original Expendables film. After agreeing on the big Bowie style and the ivory micarta handle, Gil suggested to Sly that something scrimshawed on that big blank handle might look really good. Sly loved the idea and immediately suggested they use the Expendables tattoo. Gil contacted his friend and scrimshaw artist, Rick “Hutch” Hutchings, to do the scrimshaw on the knife handle and it turned out great, Sly loved it and the large Bowie was seen numerous times in the film. 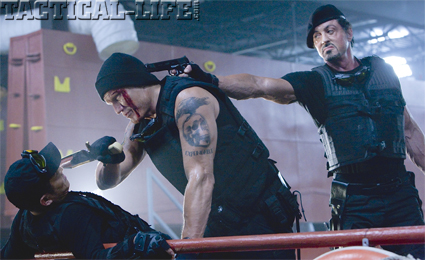 After Expendables became a box office hit, preparations began for Expendables 2. Once again, Sly and Prop Master Johnson called upon Gil to make the knives. In the shop, Kent Johnson was looking at the grips on Stallone’s .45s and asked Gil what could be done to juice them up. Hibben suggested an inlay in the grips and doing the same scrimshaw that was on the Bowie onto the grips. Gil routed out ovals in the gun grips and inlaid them with ivory micarta and once again called upon Rick “Hutch” Hutchings to scrimshaw the inlays with the Expendables tattoo. Now Stallone—who is very “hands on” about his on-screen weaponry and has final say on any gun he uses—had a distinct set of 1911 .45s that met with his approval.

The Kimber Gold Combat IIs and their one-of-a-kind grips, along with your favorite actions stars of the last two decades, will be highly visible in the new Expendables 2 film. I know I’ll be there opening day! For more information, visit theexpendables2film.com. For more on Kimber, visit kimberamerica.com or call 888-243-4522. 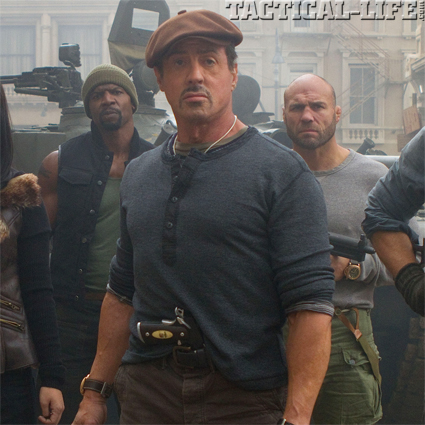