1
SHARES
230
VIEWS
Share on FacebookShare on Twitter
Pocket carry enables you to preemptively grip your gun, significantly reducing the time it takes to draw.

A small-framed revolver, like the lightweight Smith & Wesson J-frame models, can be conveniently carried and rapidly deployed from a holster hiding in a trouser pocket. Although the benefits of pocket carry are widely touted, the techniques and tactics for effectively deploying a pocket gun may be unfamiliar to some. Firearm, garment and holster selection are integral components of concealed carry, but are no substitute for tactical awareness, technical proficiency or your will to win the encounter.

Firearm Selection
The shape of the S&W J-frame revolvers makes them ideal for pocket carry. Many semi-automatic handgun models are small and light enough for pocket carry, but the slide on these guns extends so far beyond the grip that it could become entangled in the pocket when the gun is drawn. Another benefit to carrying a revolver in place of a semi-automatic handgun is its resistance the lint and debris inherent with pocket carry.
Laser sights help compensate for some of the shortcomings of small-framed revolvers, such as relatively small sights, a shortened barrel, a double-action (DA) trigger pull and significant recoil. Laser sights help the shooter quickly acquire the target initially and can assist recovery from recoil between shots. Not to mention the possibility of a would-be assailant becoming suddenly less motivated to attack once he sees the red dot on his chest.

Holster Selection
A pocket holster has three primary functions: stabilizing the firearm in your pocket, masking the shape of your firearm to disguise the fact that you are armed and allowing a smooth and consistent draw. More traditional holsters are made of leather, although nylon and kydex holsters are becoming more prevalent due to their sleek design and affordability. It’s important to note that the design of your particular holster could require modification to your draw stroke. Some pocket holsters rely solely on adhesion between the holster and the pocket lining to keep them in place when the firearm is drawn and are commonly made of either coarse leather or nylon with a rubberized strip encircling the holster to keep it from leaving the pocket during the draw. Adhesion-only holsters usually enable you to draw without having to manipulate the holster in your pocket. However, they are arguably more likely to remain attached to the firearm when drawn. 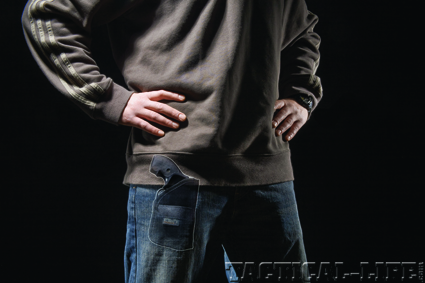 A pocket carried revolver is a convenient and reliable self-defense option. However, choosing the right equipment and understanding the limitations of your firearm is vitally important.

Anyone who carries a concealed firearm knows that garment selection is vitally important. Tactical vests are popular concealed carry garments because they are loose fitting, have tons of pockets, and permit quick access to your firearm. Unfortunately, the mere fact that you wear one of these vests screams, “I’m armed!” Add to the mix a pair of khaki tactical pants, a firearm themed shirt and cap, and you are sure to draw the attention of every potential bad guy in sight. Remember that when you dress like a cop or a gunfighter, you forfeit the element of surprise, which is paramount in self-defense.

All you need are pants with relatively large pockets and just as importantly, large pocket openings to permit easy access to your firearm. Fortunately, loose fitting jeans with oversized pockets are all the rage nowadays. Dress pants tend to have fairly large pockets and are also generally well suited for pocket carry. In warm weather, concealed carry can be problematic since we tend to wear fewer clothes. While this presents a dilemma for those who rely solely on traditional carry methods, it is not a problem if you utilize the pocket carry method. Most casual style shorts come with pockets that are more than adequate for pocket carry.

Whether wearing pants or shorts, it is important to utilize a well-made belt. A belt does more than hold your pants up, it helps distribute the weight of the gun evenly, which makes carrying a gun in your pocket more comfortable and less apparent to those around you.

Deployment Considerations
As you can imagine, thrusting your hand into your pocket to “quick draw” your firearm under stress is easier said than done. The stress associated with any life or death encounter and the associated loss of coordination are often referred to as the fight-or-flight response—the body’s natural physiological response to extreme stress.

While it is certainly a good idea to practice accessing your holstered pocket gun in a hurry, in many cases, you can streamline this process by keeping your hand in your pocket with a firm grip on your gun. Preemptively gripping your gun significantly reduces the time it takes to bring the gun on target, which can help tilt the odds in your favor. You can grip your pocket carried gun without drawing unnecessary attention, as would be the case if you were to clutch your holstered gun worn elsewhere on your person. If the perceived threat turns out to be a false alarm, no one will know you were poised to draw your gun.

Ideally, when drawing from your pocket, you should position your non-shooting hand up to fend incoming strikes or divert the assailant’s attention from your draw. However, if you’re wearing an untucked shirt or a jacket that covers your pocket opening, you may need to lift your garment with your non-gun hand to facilitate a smooth draw. 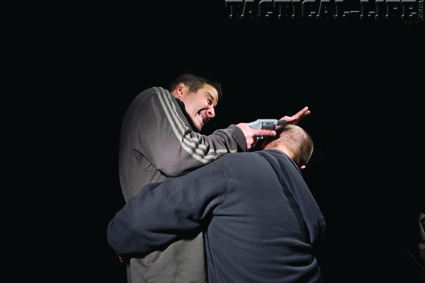 If your revolver runs dry during the course of the fight, consider using it as a bludgeon.

Small-framed revolvers are designed for concealment and ease of draw. As such, they make excellent close quarter weapons, and that’s important when you consider most gunfights occur at distance well within 10 feet. When engaged in full-on combat, there is a good chance the assailant will attempt to grab your firearm to either avert the muzzle and attack or disarm your. Even after a violent struggle to maintain possession of your revolver, as soon as the assailant’s hand is clear of the cylinder, it will go bang when you pull the trigger–no tap, rack, assess required.

Remember that a gunfight is still a fight. The fact that you and or the assailant are armed does not preclude you from engaging in a violent physical confrontation. If you are within arms length of the assailant, rather than try to create distance by backing up, strike under the assailant’s chin with your non-gun hand to drive him backward as you access your gun. This will not only disrupt the assailant’s balance and vision, it will cause him to transition from attack mode to self-preservation mode. Even if you are not landing telling blows, you are aggressing and the assailant is retreating.

If you find yourself clinched with the assailant, try to flank him by ducking under his arm or by pulling his arm across his body. Once on the outside of the assailant’s arm, you are relatively safe from any possible weapons and are in a dominant position from which to shoot, if warranted.

If your revolver runs dry and you’re still fighting with the assailant, don’t attempt to immediately reload. Instead, use the empty revolver as a bludgeon to strike the assailant until he no longer poses a threat. When he falls to the ground, you should have plenty of time to create distance, reload, and assess the situation.