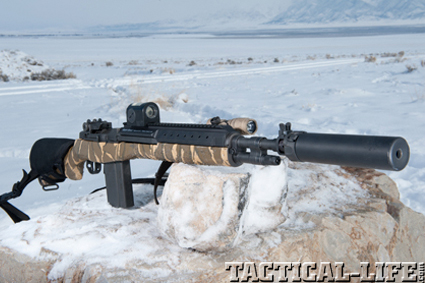 1 of 8
Oblique
The M1A has been proven in every combat theater in the world, in every survivable weather condition—it is the epitome of a combat rifle. Shown here with Zeiss Z-Point reflex sight, SureFire WeaponLight and Mini suppressor. 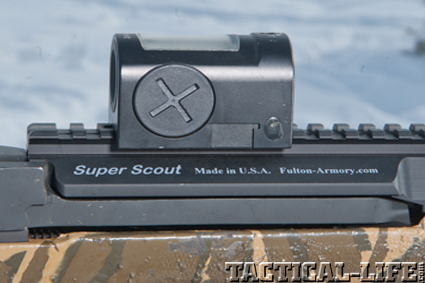 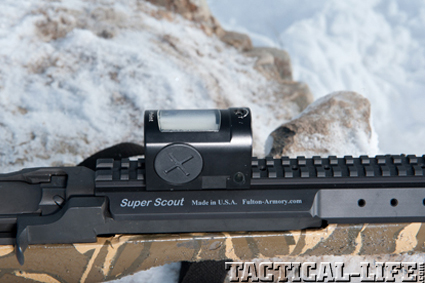 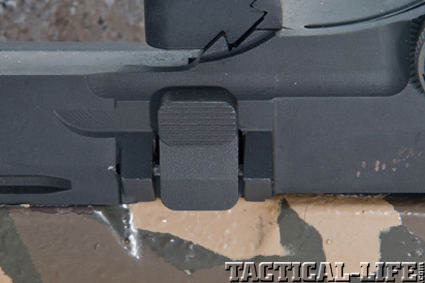 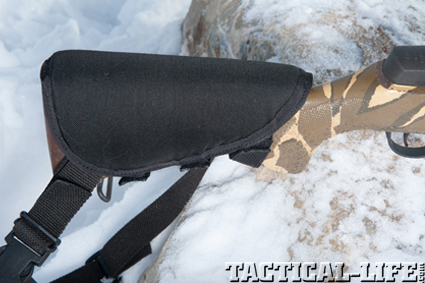 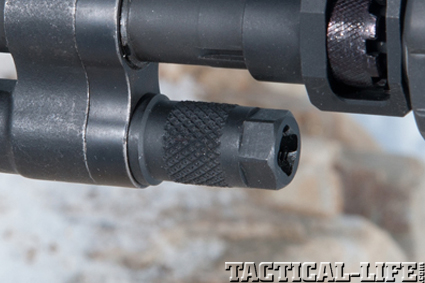 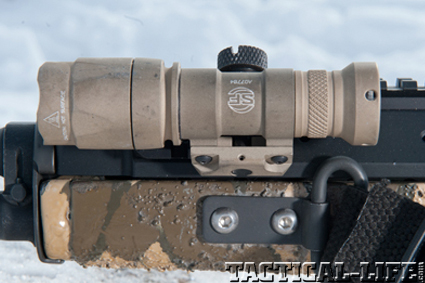 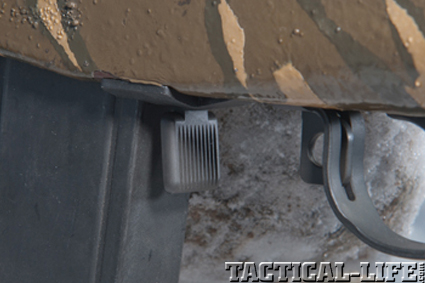 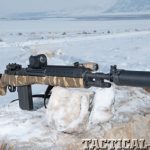 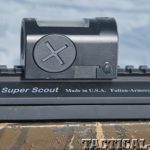 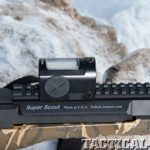 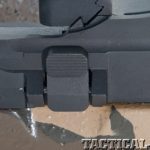 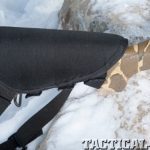 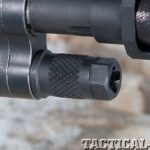 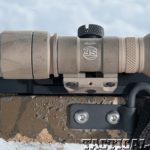 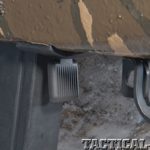 Officers in rural areas frequently need to track suspects in the backcountry. The recent shooting of a park ranger in Southern Utah sent dozens of officers into open country for days. Drug traffickers often hide their grows amongst the forests and hills of rural American. These realities call for a tactical need that most urban officers never encounter.

Those of us working in the West can encounter, just an hour or two outside the urban sprawl, hundreds of miles of open country. There, your mode of travel is your feet, and all you get is what’s in your pack and on your rifle. Your rifle must be 100 percent dependable. If it breaks, then you are tracking an armed suspect with your pistol—not a good thing. Also, you may be tracking for days. Suspects can be around the corner or 300 yards distant. They may have been hunting the area for years, meaning you are entering their backyard. What you carry must work in the mud, muck, snow, dust, dirt and rain. So the minimum for me is a .308 caliber rifle, maybe two, one of which must be a semi-auto. What I prefer is a precision long-range rifle in an Eberlestock with a trusted semi-auto in hand—“trusted” being the operative term.

My choice for a trusted .308 remains an M1A or M14. This always brings up the same old, hackneyed comparisons and arguments: The M1A is old and antiquated; the AR is new, improved and sexy. My usual response is, “I am also old, and neither improved nor sexy, so it fits me just fine!”

A recent discussion I had with a friend highlighted the absurdity of the M1A–AR argument. He told me my M1A was “old technology” and asked how I could “go into harm’s way with 100-year-old technology?” He then proceeded to say how much better his AK rifles were. Given that the M1A was placed into service 10 years after the AK-47, the irony was almost comical.

While the AR platform in 5.56mm has acquitted itself nicely in huge numbers, the same cannot be said of the .308 AR designs. The M14 is the first choice of many military operators to this day. Why? Precisely because it has been proven in virtually every theater of operation on the planet. Is the M14 perfect? Of course not, but it works and has done so in every climate a human can withstand.

Super Scout
Over the years I have built several custom M1A rifles. Having used all the decked-out custom jobs with railed chassis, I prefer something simple. So when I was building the rifle for this article, I only added those things that are useful to me—this rifle would be carried for miles. I did not take a normal gun and install a space-age stock and four tons of gear and accessories.

I used a rack-grade Springfield Armory M1A Scout as the base. The 18-inch barrel gives up very little velocity in exchange for its very handy size. The standard gas system maintains reliability across a broad range of ammunition. Accuracy is generally in the 1.5-MOA range with good ammunition. And since I would have a precision rifle on my back, those features were all that was necessary.

I’ve used every railed chassis system out there and can say that they are heavy, expensive and do very little to meet my needs. The stock I used is a GI version, altered by my friend Steve Palano of Barlow’s Custom Guns. He started by shortening the length of pull and straightening the pistol grip a bit. This allows for a better fit with my short arms and more comfortable aiming. Some grit was added to the grip and forend for a solid grasp during winter. A medium-sized stock pad was attached, and the stock sling swivel was bedded into the stock. A QD cup was added to the rear for my Blue Force sling. For strength, metal was bedded into the front area where the sling swivel is attached. The stock was coated in an epoxy paint with a tiger-stripe pattern, using colors common to multi-cam gear. My only change was to move the front sling swivel to the side and bolt it into place, and attach a Smith Enterprise padded cheekpiece.

Fulton Armory’s Gen II Super Scout Mount was the next addition. This rail is simpler than most and provides a continuous rail on the top and the ability to mount smaller rails on either side, at 10 and 2 o’clock. The rail dissipates heat well and eliminates the “cooking” of scopes that often occurs with standard rails. One rail was added at 11 o’clock, and a SureFire Mini Scout Light was attached to it.

A Smith Enterprises bolt release/catch was installed. It speeds up magazine changes, especially with gloves. Sadlak’s tactical magazine catch was added for the same reason. For sighting, the standard sight was replaced with one using a tritium insert. The last of the additions were a Delta P Designs M14/M1A adapter, a Schuster adjustable gas system and a SureFire Mini 7.62mm suppressor. The Delta P mount is the strongest and one of the best-designed adapters I’ve used to date. The Schuster gas plug lets me tone things down a bit for the suppressor. And SureFire’s Mini is small and lightweight, and does not add a ton of back pressure. It attaches quickly and securely to a flash suppressor and has little effect on point of impact.

Shooting Impressions
My primary optic was a Zeiss Z-Point. It is lightweight and incredibly rugged, mounting a bit lower than most on the rail. The dot is adjustable for intensity. Unless you drive over it with a truck, the Z-Point will be more or less indestructible. The photocell on top assists with battery life, as does the automatic shut-off. The optic’s listed battery life is fantastic, but spare batteries should always be on hand in the field.

Accuracy testing was completed using an old Scout scope. A new Leupold 1.5-5x33mm VX-R is next on the scope shopping list. But for now, the fixed 2.5x did its job during accuracy testing and could be used in a pinch. (Attaching the VX-R in a quick-attach mount would be perfect, allowing you to switch optics in the backcountry whenever necessary.)
The instructions for the Fulton Armory mount are very clear, and you need to “shoot in” the mount. This mount attaches to the barrel with a unique system that locks the mount in place. It requires shooting some groups while tightening the rail a little at a time. Once completed, this rifle grouped as before, right around an inch with the Federal Gold Medal Match. Everything else was under 1.5 inches, perfect for the gun’s intended use.

The front sight was a bit lower than the stock unit, which worked out nicely. With the rear sight bottomed out, it was pretty well centered at 100 yards using a 6 o’clock hold. At 25 yards, you just held in the middle and the sight was dead on. Having the rear sight at the bottom is my preference, as this allows me to make sure the sight is bottomed out before it goes to work and my backup sights are set.

As this is not a precision rifle, field-testing was the most critical part of the evaluation. Taken out into a foot of snow and fired from 25 to 300 yards, the M1A Scout was flawless. The stock provided a very solid purchase, and for me the ergonomics were perfect. The gun carried well even with the suppressor attached. Carrying this rifle cross-slung is absolutely comfortable. The gun’s standard design means unsupported shooting is comfortable and fast. After a few rounds the Scout just became a part of me, essential in a field rifle.

The cheekpad was just right for the Z-Point, enabling solid purchase and consistent accuracy. Both the sight and pad came off easily. (The Z-Point may be the easiest such sight on the market to remove if needed.) Adjusting intensity was simple, which helped given that conditions moved from very bright to a typical snow gray. Hits on the Tubb Tactical Stake Target from 300 yards and in were regular and simple. Anything longer, and the bolt rifle would come out of the bag. At 200 yards and in it was incredibly fast to the target and extremely accurate. Dropping to kneeling and getting on target was about as fast as it gets, especially in such snowy conditions. Speaking of which, it was time to test the ruggedness of the setup.

The rifle was dropped in the snow and rolled around a few times, cleared of obstructions and fired. It never missed a beat. Cradled in my arms, I crawled into position through a foot of snow, with the rifle ending up as white as I did. Again, the Scout never missed a beat. My GI magazines were dropped in the snow, wiped off by hand, blown out as best as possible and inserted. Again, no issues. The Scout fired when loaded with 3 rounds, 20 rounds and everything in between, with no issues. Over the course of a 500-round day, in single-digit temperatures and covered in snow, the Scout never malfunctioned (with or without the suppressor). It just does not get any better than that. Period.

Final Thoughts
Given this was an out-of-the-box Springfield M1A Scout, a match trigger and unitized gas system would likely improve accuracy. The Smith bolt release and Sadlak magazine release were excellent. Magazine changes were faster and more positive and facilitated using winter gloves in the cold, wet and snow. The SureFire suppressor is perfectly suited to this duty—after a few rounds I forgot it was there. The rifle remained well balanced, and removing and attaching the suppressor is really fast and positive. I did just that several times during testing, and it never had a perceptible effect on impact or accuracy. Is this Scout super quiet? No, but it’s quiet enough to shoot in the field without ear protection or compromising your position. For a combat rifle, with combat accuracy, it is excellent.

The entire endeavor only served to prove what was already certain: The .308 M1A system remains reliable and proven, regardless of when it was designed. It is as reliable as any AR I have tested and more so than most. With some simple additions, I equipped the Scout to do most anything an officer, soldier or professional would need. The M1A remains one of the best .308 combat rifles you can field. No safe queen, this rifle will stay with me for years to come and go to work as it was intended. 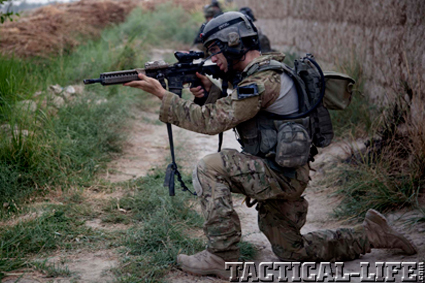 Officers in rural areas frequently need to track suspects in the backcountry. The recent…