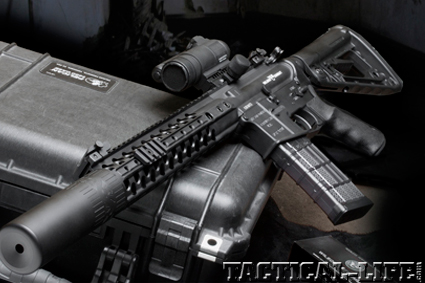 1 of 7
SBR-2
The Wilson Combat SBR Tactical boasts the same high standards of the 1911s they are known for. 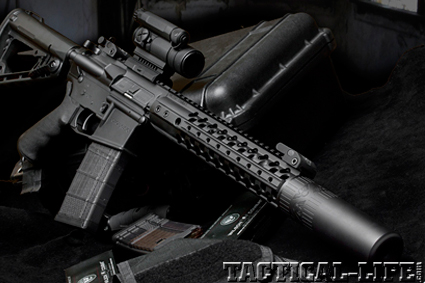 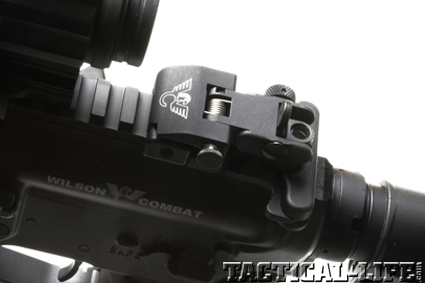 3 of 7
SBR-3
Wilson Combat offers flip-up iron sights that are rugged and functional. 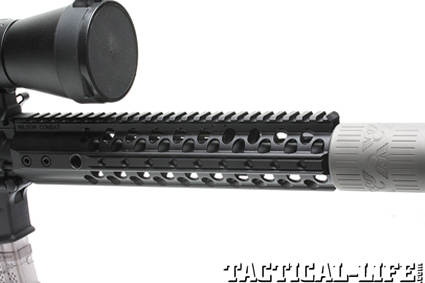 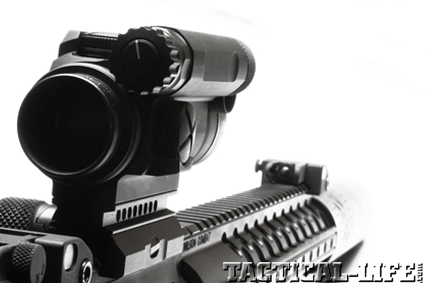 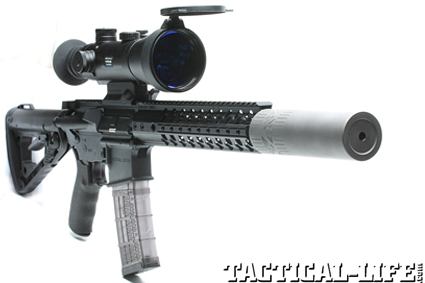 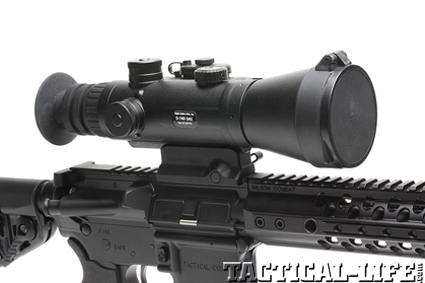 7 of 7
SBR-7
A Night Optics scope is shown mounted to the SBR in a Wilson Combat mount. The scope is ideal for tactical and hunting uses. 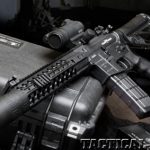 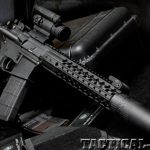 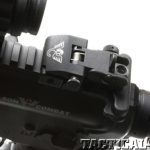 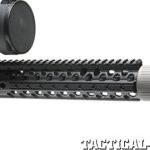 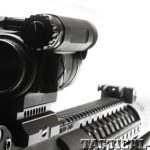 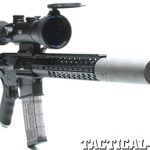 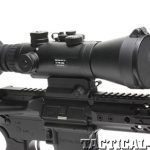 For over 30 years, the name Wilson Combat has been synonymous with the 1911 pistol. Way back when, Bill Wilson opened up a one-man gunsmith shop with the goal of making accurate and reliable 1911s. Then in 1991, Bill branched out and started producing his own line of 1911 pistols.

In the mid ’90s, Wilson ventured into the AR market with the same enthusiasm and commitment he had for the 1911. This was before the AR craze had hit—many wondered why Bill wanted to build rifles. The answer goes back to the 1911: Bill was unsatisfied with the market’s current offerings and thought that he could produce a better rifle; as with his 1911s, each of his AR components had to pass a rigorous quality-control inspection.

Wilson Combat ARs
Every Wilson AR starts with quality components that are either manufactured at Wilson’s Berryville, Arkansas, shop or manufactured to exacting specifications by selected vendors. The lower receiver is received as a raw forging and then finished in-house on one of Wilson’s CNC machines. The upper receiver is supplied by an outside vendor and built to Wilson’s specifications. Both the upper and lower receivers are made from 7075-T6 aluminum. Wilson rifles come standard with Ergo pistol grips and adjustable Rogers/Wilson Super-Stocs.

As any rifle shooter will tell you, the key to an accurate rifle is its barrel. Wilson Combat barrels are match grade, feature M4 feed ramps and are chambered and profiled in-house. All Wilson rifles are direct impingement and use a carbine-length gas system with a low-profile gas block. The company has also designed a series of flash suppressors and muzzle brakes, which I found to be quite effective.

Wilson Combat has also designed a modular drop-in Tactical Trigger Unit (TTU) that can be installed on any AR rifle in less than two minutes. The TTU provides a crisp 4-pound pull and a positive reset while still meeting all military specifications for drop safety. Unlike some match triggers, the TTU is designed to reliably ignite military-grade ammunition. The CNC-machined trigger housing contains a heat-treated trigger, hammer, sear and stainless steel spring.

Wilson’s Tactical Rail Interface Modular (TRIM) forend is designed to be light, slim, strong and adaptable. It is machined from 6005A-T5 aircraft-grade aluminum and is completely void of rail teeth. The unit can be installed in five minutes with common tools and serviced using only a hex wrench. The TRIM forend can be installed with short lengths of Picatinny rail panels in user-specified locations. Wilson has threaded each accessory mounting hole, which eliminates the need for a backing plate. Integral QD sling swivel points are located on both sides of the forend. I have tested the TRIM on several rifles, and it has become one of my favorite rail systems.

SBR Tactical
I recently received a Wilson SBR Tactical carbine chambered in 7.62×40 WT, a cartridge designed by Bill Wilson to provide a .30-caliber hunting round with match-grade accuracy. The cartridge is based on a Lake City 5.56x45mm NATO case that has been shortened and then opened up to accept a .30-caliber bullet. The result is a round that exceeds the 7.62x39mm load in both accuracy and terminal ballistics. The 7.62×40 WT has proved effective on a number of different game animals, including several hundred pigs that Bill has harvested from his Texas ranch. In order to accommodate the 7.62×40 WT, Wilson uses a modified Lancer L5 magazine (the size of the round reduces the magazine capacity by two).

The SBR Tactical features a U.S.-made, 416R stainless steel, 11.3-inch barrel with a 1-in-12-inch twist rate. All Wilson barrels feature a hand-polished bore, chamber and feed ramp. The carbine-length gas system ensures reliability, while the precisely crowned muzzle optimizes the accuracy potential of every barrel. Wilson’s Rapid Thread muzzle brake was installed for use with their proprietary Whisper suppressor. For customers who prefer a non-NFA rifle, also available are 16-, 18- and 20-inch barrels in 7.62×40 WT, 5.56mm NATO, 6.8 SPC and 300 Blackout.

We also received one of Wilson’s .30-caliber Whisper suppressors. (“Whisper” is a trademark of and used under license by J.D. Jones.) The Whisper is the culmination of extensive research and evaluation, and much of the testing was completed by Bill at the expense of many hogs. The Whisper suppressor is machined from a titanium billet and features a monocore baffle design. This allows for a very light suppressor that dissipates heat effectively. The Whisper is 6.31 inches long and 1.87 inches in diameter and weighs 17.8 ounces. The outer diameter of the suppressor matches the dimension of the TRIM rail and, when used with the Rapid Thread suppressor mount, only adds 4.5 inches to the rifle’s overall length.

Wilson is the exclusive manufacturer of the 7.62×40 WT cartridge. They currently offer loads in 115- and 125-grain weights, using a variety of bullets. I received a sample of the 125-grain Speer TNT load. The advertised velocity for this load in a 16-inch rifle is 2,400 fps. Out of our 11.3-inch SBR Tactical, the TNT load
averaged 2,331 fps with an extreme spread of 56 fps.

Live Fire
I installed Leupold’s excellent Mk 4 2.5-8x36mm M2 tactical scope with a LaRue SPR mount for the 100-yard accuracy testing. Its TMR reticle and brilliant light-gathering capabilities make the Mk 4 series of scopes the choice of both military and law enforcement units. I have found this particular scope to be extremely versatile, and it has become my go-to glass for AR evaluations.

On the range, the 7.62×40 WT with the 125-grain Speer TNT proved to be a very accurate round. With the Whisper suppressor in place, our best 100-yard, five-shot group measured 0.48 inches — we had to keep reminding ourselves that we were testing an 11.3-inch SBR, not a 16-inch tricked-out tactical carbine.

Second Upper
I also received a second upper receiver chambered in the popular 300 BLK. The 300 BLK upper features the same quality upper receiver and pistol-length gas system, as well as a match barrel with a 1-in-8-inch twist rate. For the 300 Blackout upper, we used three loads from PNW Arms. The 220-grain OTM subsonic load averaged 909 fps, while the 155-grain HPBT Match round averaged 1,872 fps. The hottest load was the 125-grain Nosler Ballistic Tip, which averaged 2,017 fps. All three loads had very small extreme spreads.

At 100 yards, the PNW 155-grain HPBT Match proved to be extremely accurate, producing a sub-MOA five-shot group, while the Nosler Ballistic Tip also produced a respectable result. When we shot the PNW 220-grain subsonic load, the group opened up to 2.78 inches and impacted approximately 8 inches lower than the 155-grain load using the same zero and point of aim. The 220-grain round is designed for engaging targets at close ranges and not intended for MOA accuracy at 100 yards and beyond. For perspective, the load is very similar to a 230-grain .45 ACP FMJ round.

Last year, I had the opportunity to visit Wilson Combat and meet some of the company’s talented gunsmiths. After spending a day watching each step of the manufacturing, assembly and finishing processes, I came away with a tremendous respect for the company and its products. 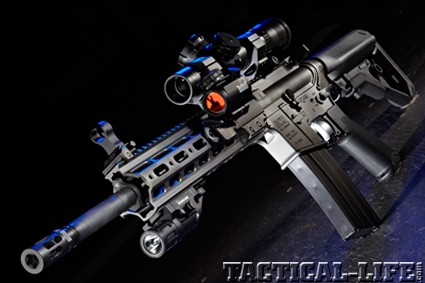 Bravo Company and Haley Strategic have got you covered with the 5.56mm HSP Jack...