0
SHARES
42
VIEWS
Share on FacebookShare on Twitter
From tactical to whitetail! With simple furniture changes, an AR like the Wilson Combat UT-15 can be the all-around big-game rifle. Remember to check local hunting regulations in the state you’ll be hunting before you step foot in the woods!

You scrimped, saved and even dug down under the couch cushions for a few extra coins, but now that top-of-the-line AR15 is sitting in your gun safe. It looks good there doesn’t it? Being an avid shooter, you have even gone out and practiced regularly with it. If you’re really into the game, you may have taken a few defensive rifle courses to improve your skills. But now that it’s early July, when the days are long and hot, your mind starts to wander. Don’t worry, that is a condition that affects hundreds of thousands about the same time of year.

In an effort to put aside the summer’s heat, we start to dream of fall and the next hunting season. You place your new AR back in the safe and polish up that old Marlin 30-30. But wait a minute! You can still hear that AR calling out to you and the concept of setting it aside just doesn’t seem right. Take heart, the same trait that propelled the AR15 into greatness will save it once again.

The Model 1911 has been the century’s premier handgun or that the Ruger 10-22 dominates the rimfire world of shooting. These two share a common trait with the AR15. All three are the “tinker toys” of the American shooter. Like the erector set we played with as kids, these firearms can be taken apart and, with the help of additional pieces, reassembled into about any combination we desire. Scan the pages of any shooting magazine and you will see an untold number of sources for these new and improved parts and pieces. All of this is leading to one major point. Expert after expert has told us that no one rifle will do it all, but if there is one that will push that axiom, the AR 15 is it. Instead of setting it aside for part of the year, put that old .30-30 back in the safe and spend your time converting your AR for use in the field. 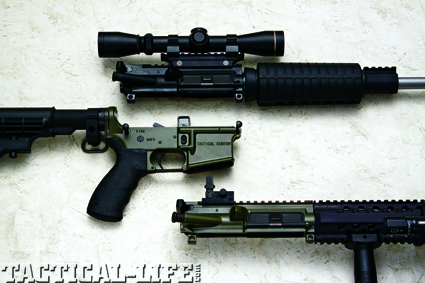 The AR platform is designed to allow you to separate the upper and lower receivers by just pulling out two pins. You can convert your rifle to several different calibers in just minutes for half the price of buying a new rifle.

The AR15 sitting next to me in the studio has to be one of the premier defensive rifles of its time—Wilson Combat’s UT-15 Urban Tactical model. Wilson Combat of Berryville, Arkansas earned their reputation building top-line Model 1911 handguns and has used those same skills to create a line of AR15 rifles second to none. The UT-15 starts life as a matched set of upper and lower receivers machined from 7075 T6 aluminum forgings. The flat-top upper is mated with a 16.25-inch, free-floated, match-grade barrel surrounded by a ventilated quad-railed hand guard. This combination is ended with Wilson Combat’s tactical muzzle brake. The JP trigger and hammer group delivers a crisp trigger pull of 3 to 3.5 pounds. Most would say that the six-position, collapsible butt stock and the NP3-coated bolt and bolt carrier would finish up the package.

But it is the quality of assembly by skilled master riflesmiths that make this a tactical rifle you can bet your life on. Each UT-15 rifle is chambered in 5.56×45 NATO matched with a 1:9-inch twist and is guaranteed to have a 1-MOA accuracy at 100 yards. The rifle sitting here has been fitted with Wilson’s folding front and rear sights, a vertical grip, removable sling swivels and a Pelican light with a Daniel Defense mount. In every sense of the word, it is a hard-use tactical rifle. But can I hunt with it? 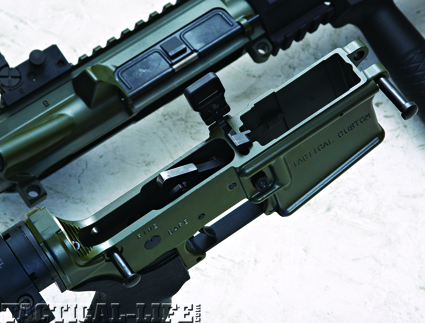 The AR-15 is as much fun as the erector sets we played with as kids. Pull two pins and switch upper receivers to match your firearm to your need.

The 5.56×45 and its civilian counterpart, the .223 Remington, have proven their accuracy potential and are noted to be deadly on varmints of all sizes. Add a good scope to the mix and I would take this rifle out to the fields after any target from groundhogs to coyotes. In fact its light weight would feel easier to carry than my heavy-barreled bolt actions. A good bipod can be added to the Picatinny rails in just seconds. This may add a little more use to your tactical carbine and varmint hunting can be entertaining. In some areas it can be considered a necessity.

However, I’m a Southern boy and when I go hunting, my aim (pun intended) is to put a whitetail deer in my sights. Some would quickly point out the size and limitations of the 5.56 cartridge and tell me to put up the AR and reach for the Marlin. I have used the .223 on a couple of deer hunts while testing a new brand of ammunition. It did the job, but the phrase we always hear when someone is trying to justify the use of this or that ammunition is, “with proper bullet placement.” Unfortunately, proper bullet placement is not always guaranteed even with a rifle capable of 1 MOA. Rather than switching rifles, I would prefer to start playing with my erector set and use an AR year round. After all, the more practice you can get with your tactical rifle the better off you will be. 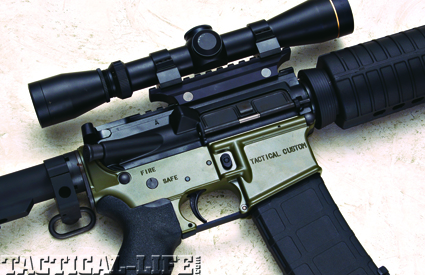 Let’s look at our options for turning the UT-15 into a deer rifle. Before you think about the fact that you could have bought your AR in a different caliber to between with, remember the basic truth. We buy our 5.56×45 tactical carbines because they shoot an acceptable combat round that is readily available as are the magazines. We can go out and shoot those rounds all day in practice without breaking the bank or our shoulders. The AR10-style rifle with its .308 Win. round may be ideal for deer hunting but, besides costing a great deal more, it can wear you out at the range. The 6.5 Grendel and the 6.8 SPC were choices before you bought your 5.56 but have their limitations. Ammunition and magazines for these calibers are somewhat limited and costly. For a tactical rifle that is a drawback, but the whole world changes once you look at your AR as a deer rifle.

You can purchase a barrel, bolt and new magazines and convert to these calibers in a short order. Of course you could also just build upper receivers in these calibers and switch back and forth with nothing more than pulling two pins and changing the uppers on your tactical carbine. In fact there are several other calibers that can be built up using your lower receiver. Even with pre-season sighting in, standard practice and a full season of hunting you only need one or two magazines along with an acceptable amount of ammunition. It’s not like we have to fight off wave after wave of killer deer. Plus the cost of building a new upper is a lot cheaper than buying another total rifle.

One of the main features of the AR15 that has always drawn my attention is how it can be configured to match your exact needs. You can change it any way you want to where it is no longer just a rifle, but your rifle. With this mindset, I wanted to go a route less traveled and chose a caliber known as the .300 Fireball. The Fireball is a spin-off of the .300 Whisper, the brainchild of J.D. Jones of SSK Industries. The .300 Fireball (also known as the .300/.221) and the .300 Whisper were created by taking the .221 Fireball case and necking it up to .30 caliber. Another method for forming cases can be by starting with 5.56×45 cases and necking them up to .30 caliber after shortening the case. Factory ammunition is available from Cor-Bon and it’s a reloader’s dream. These rounds can be loaded with heavy bullets at sub-sonic speeds or you can load lighter bullets in super-sonic ranges that will match the .30-30 Winchester. 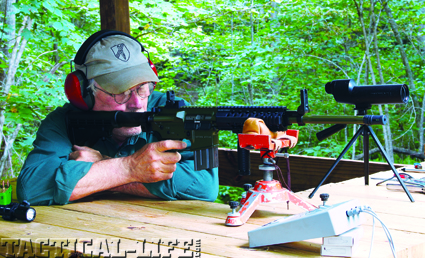 For my first experiments at the range, I borrowed a set of dies from a friend and quickly transformed some 5.56×45 cases to .300 Fireball. For those who don’t reload just contact Cor-Bon and order whatever you need. First, I converted the UT-15 back to its original configuration just to confirm what I already knew. Wilson’s UT-15 will drive tacks. Every five shot group fired with the use of a scope was well under one inch. My best group measured a mere 1/2-inch for five shots. Even with using the pop-up iron sights I was able to shoot groups in the 1 ½-inch range at 100 yards. A few seconds of work and I had the .300 Fireball upper installed and was back to shooting.

I had mounted a Leupold VXII 1-4×20 mm scope to the Olympic upper and was shooting 5-shot groups back into the 1-inch range. The .300 Fireball is known for its accuracy and my day at the range confirmed every bit of its reputation. My best group measure 11/16 inch at 100 yards. As with the 5.56×45, the .300 Fireball produced recoil that isn’t even worth mentioning, ideal for long practice sessions. The rifle functioned without a hitch throughout the entire day. I’ll play with my loads over the next few months while waiting for deer season to achieve the best accuracy versus velocity.

I returned to the studio, it’s still 90 degrees in North Carolina, but my mind is on deer hunting. The Wilson Combat UT-15 is sitting here in its tactical form ready to protect myself and family. In just seconds it can be ready to head to the woods to dispatch a coyote or even to bag a deer for dinner. Think about the possibilities available to you to convert your tactical rifle into a game getter. I chose the .300 Fireball just to be different, but you can review everything from the 6.8 SPC to the .50 Beowulf.

Instead of collecting dust in the gun safe, my tactical rifle will get year round use collecting dust from the back trails of North Carolina. Whatever the assignment the AR will handle it.