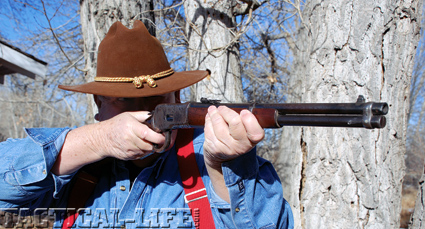 The shorter Trapper ‘92s were prized for their quick handling.

YOU LOOK AT THE history of the westward expansion in America, you will see a period of roughly a hundred years, the 19th Century, full of major battles and forgotten skirmishes, isolated shootings and one-shot affrays. It was a chaotic and turbulent century, but when the last page of the calendar was turned, the historians had plenty to study and write about.

It is also true that many of the remembered events, and a great deal of the day-to-day life on the Frontier, turned on the skillful use of firearms. Only in the last 35 years or so of the 19th Century did those guns fire metallic cartridges. It is also true that the latter three decades were pretty well dominated by Winchester lever-action rifles and one model or another of the Colt revolver.

According to Hollywood’s historians and their dubious scholarship, the most widely used Winchester of them all was the Model 1892. If the gun had existed in those earlier days of the 19th Century, it would have no doubt had a major impact.

But it didn’t, because the ‘92 was not offered until 1892 or 1893. That was long after the major battles of the time. There were no ‘92s at the Little Big Horn or the OK Corral, none in the hands of Custer or James. The guns simply did not exist, but they are almost invariably used in Western films and TV shows. 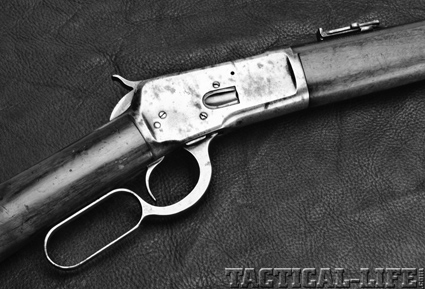 The basic ‘92 action was much used in rifles, carbines and even muskets. Many were made up as special order guns.

They had ‘92s because the gun stayed in production at Winchester’s New Haven plant until 1941. It was easy to buy new ones and get parts to keep them all running. Now that the replica firearms business is doing so well, we can buy a top-notch replica of almost any variation of the Henry or Winchester rifles really used. Actor Tom Selleck is a fiend for authenticity in films and he has used such esoteric guns as a replica ‘76 Centennial Model.

However, the demand for SAS (Single Action Shooting) arms is such that we now have a good variety of ‘92 replicas, including carbines, rifles and even takedowns. Clearly, we have an abiding fondness for the little ‘92 Winchester, be it original or replica. That’s grounds for taking a look at the Model 1892 Winchester, another of John Browning’s timeless designs. 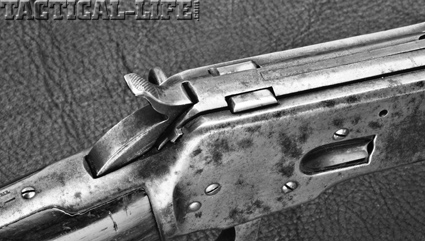 Essentially a scaled-down version of the much larger Model ‘86 rifle, the ‘92 locked by a pair of blocks working in mortises on the bolt and receiver inner walls.

Gun Details
Browning hit a home run with the first rifle he designed specifically for Winchester, the Model 1886 lever-action rifle. This was a big strong gun chambered for the long, powerful black powder rifle cartridges of that day. The ‘86 was an instant success and Winchester wanted a new rifle to match it. They had done very well with their own proprietary short cartridges: .44 WCF, .38 WCF and .32 WCF in the 1873 Carbines and rifles. The rest of the world called these three rounds the .44-40, .38-40 and .32-20, but Winchester liked the “WCF” (Winchester Center Fire) designation.

Basically, Winchester wanted something smaller, stronger and smoother for these cartridges. John Browning resolved the problem by scaling down the already proven ‘86 action. In doing so, he came up with a gem for anyone who wanted a light, handy rifle for personal defense and for hunting up to deer-sized game.

Winchester’s customers agreed, because they bought over a million of the sleek little lever guns over the next 50 years. Admittedly, the last few years the gun was in the Winchester catalog saw slow sales, but the period around the turn of the century was the heyday of the ‘92. Much lighter and handier than the ‘73 Winchester, the ‘92 was a very popular gun for special orders.

In those days, Win-chester would make almost any reasonable variation to their standard models, if the buyer was willing to wait and pay a little more. Since the gun was so light and handy, a little size reduction made a great little rifle for the field. This resulted in significant numbers of ‘92 carbines made with barrels shorter than standard. For the carbine, the standard length was 20 inches and a number of guns were made with barrels as short as 14 inches. Collectors have dubbed these little carbines “trappers” because of their purported use by those who ran trap lines. The National Firearms Act of 1934 made rifles with barrels shorter than 16 inches firearms that required Federal registration and payment of fees, so the real short ones are pretty much gone forever. The gun shown with this article is a 16-inch carbine in caliber .38 WCF and it is not for sale, thank you. 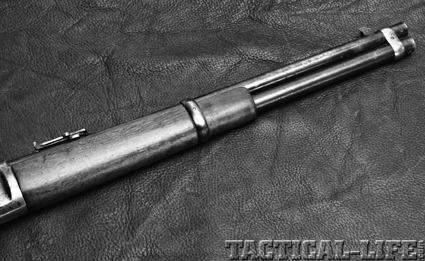 More often than not, a ‘92 carbine had a full-length magazine tube and barrel bands at the fore-end and at the muzzle.

The ‘92 action is slick because of the way that John Browning designed the arm. When the gun’s action is closed, the bolt is directly behind the cartridge in the chamber. Locking blocks on each side of the action secure the bolt to the inner walls of the action. When the shooter strokes the lever down, an internal link pulls the two locking blocks down and out of their mortises in the receiver walls and bolt. At this point, another contact on the lever pulls the bolt backward to it full extent, ejecting the fired cartridge and cocking the hammer.

It’s easier to describe what happens than it is to tell you about the remarkable smoothness with which it happens. In trained hands, the cycling of a ‘92 action isn’t much more than a quick flick of the shooter’s wrist. Along with lifelong durability and respectable accuracy, this is why the gun was so popular. It also may be why stunt man and gun coach, Yakima Canutt, enlarged the loop on a ‘92 and cut the barrel down for use by John Wayne in Stagecoach. The Duke needed less barrel to perform that spin-cock maneuver for which he was well known.

On ‘92 carbines, Winchester usually used this ladder-type rear sight. For fast work, it was left in the down position and the notch on the base was employed.

Shooting Impressions
Over the years I have had a number of genuine Winchester ‘92s, but the sample shown here is the only one in the current battery. It was originally an ordinary saddle ring carbine, but was shortened to the handier Trapper length of 16 inches at some time in its history. The saddle ring guns were the most common ‘92 configuration, but the .38-40 (or .38 WCF) chambering was used in only a small percentage of the guns. Actually, the .38-40 cartridge, which dates back to the 1870s, is an effective round in both revolver and carbine. Like all cartridges, the .38-40 has a distinct envelope, outside of which its use may be less than satisfactory. You can get about a 100 yards from this one on man-sized silhouettes. With current factory loads delivering 180-grain JSP bullets, I was able to get just over 1100 feet per second (fps) average. The popularity of Cowboy Action Shooting has caused some makers to build low-velocity loads for close-range target work. Black Hills .38-40s produce a little over 800 fps from the Trapper’s short barrel. I found that all loads worked perfectly in the old gun, but accuracy was a sometimes thing. That’s particularly true at distance and it’s probably because the years have not been kind to the bore of this graceful little carbine. Plinking targets at close range is a delight. After uncounted thousands of cycles, the action is as smooth as butter on a cornmeal muffin.

Final Notes
For the first half of the 20th Century, ‘92s might be found anywhere. Perry took one to the North Pole and Winchester sent a great many to the Argentinian police, almost at the South Pole. Police departments all over the country used them, as did many prisons. They were preferred armament for Mexican revolutionaries and Texas Rangers, deer hunters in the eastern woods and bounty hunters looking for cougars in the West. They have been copied in Spain, Italy, Brazil and Japan.
Originals in good condition bring hefty prices, but you can get a replica in almost any configuration for decent prices. The ‘92 would have to come after the 1911 and BAR in my personal hierarchy of favorite John Browning designs, but it is still one of my all-time favorite firearms. ✪ 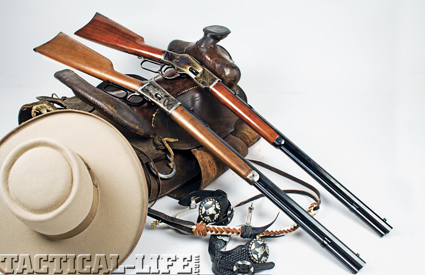 A Tale Of Two Lever Actions

The shorter Trapper ‘92s were prized for their quick handling. YOU LOOK AT THE…